President Joe Biden announced a plan to re-enter the Paris Climate Accord, which former President Trump formally left on Nov. 4. 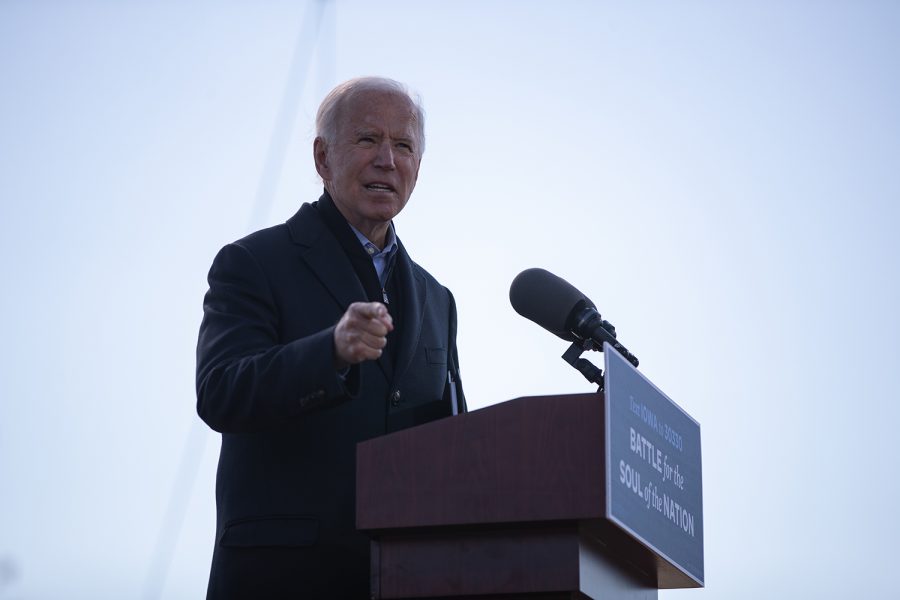 Democratic presidential candidate Joe Biden speaks during a Biden drive-in rally on Friday, Oct. 30, 2020 at the Iowa State Fairgrounds in Des Moines. Around 200 cars parked on the grounds and a few people gathered at the front as Biden commented on a change in the presidency and promised to address issues with public health due to the Coronavirus.

President Joe Biden promised to rejoin the Paris Climate Agreement “on day one” if he won the election. He followed through as the first days of his presidency rolled around, satisfying local community and University of Iowa leaders who dedicate their time to advocate for added efforts to combat climate change.

Biden signed an executive order on Jan. 20, his first day in office, announcing that the U.S. would re-enter the Paris Climate Accord, according to NPR. It will take 30 days for the U.S. to officially rejoin.

Former President Donald Trump began the process to pull the U.S. out of the Paris Climate Agreement in 2019. Indeed, the U.S. formally left the agreement on Nov. 4, 2020, the only country out of its 200 signatories to do so.

This decision left UI professors, organizations, and local environmental groups worried and upset that the U.S. would lose out on an important role in leadership and fighting for climate change.

According to the United Nations Framework Convention on Climate Change, the goal of the Paris Climate Agreement is to strengthen the global response to the threat of climate change by keeping a global temperature rise this century well below 2 degrees Celsius.

“I know that climate change is the challenge that’s going to define our American future,” Biden said in a statement upon rejoining the Paris Climate Agreement. “I know meeting this challenge will be a once-in-a-century opportunity to jolt new life into our economy, strengthen our global leadership, and protect our planet for future generations.”

UI Associate Professor in the Department of Geographical and Sustainability Silvia Secchi said the decision to re-enter the agreement made a lot of sense for many reasons.

“Reentering this agreement means that we are serious about addressing climate change and we want to be partners with other nations addressing this global threat,” she said. “I hope that rejoining the agreement is a sign that we are going to invest heavily in renewables and help other countries do so, thereby [addressing] economic inequalities within our country and at a global scale.”

Secchi said people in Iowa City can see firsthand how it has impacted the community by not taking action. She said climate change has significant economic costs such as floods and droughts.

Iowa City declared a climate crisis in 2018 and adopted a Climate Action and Adaptation Plan.

“[This] charts a path for the community to help meet the emissions reduction goals called for in the Paris Climate Accord,” said Iowa City Climate Action Engagement Specialist Sarah Gardner.

She said members of the Climate Action Commission are paying close attention to see what related initiatives come from this administration going forward.

“If there are opportunities to accelerate initiatives laid out in our [Climate Action and Adaptation Plan], we can capitalize on them,” Gardner said.

Secchi said she was not surprised when Biden made the decision to rejoin the Paris Climate Agreement.

“I was pleased that this was one of the first decisions he made, thereby signaling that climate change mitigation will be one of the signatures of his presidency,” she said.

Co-President of the UI Environmental Coalition Emily Manders said she agreed that the U.S. re-entering the Paris Climate Agreement was a great decision.

“But none of it matters unless we actually take steps to accomplish the goals of the agreement,” Manders said.

Manders, who is also a project intern for the UI Office of Sustainability, said it should be interesting to see how Biden balances working with fossil-fuel companies and environmental advocates, as both are two passionate sides of the environmental spectrum.

Even though she believes reentry into the agreement is great, Manders said it will not be enough to get the U.S. back on track environmentally.

“I strongly encourage everyone to not sit back and relax just because we entered back into the Paris Climate Agreement,” she said. “It truly means nothing without actionable steps.”