UI students roll up their sleeves for the COVID-19 vaccine

While vaccines for the general student population are likely months away, the University of Iowa started inoculating medical college students that interact with patients. 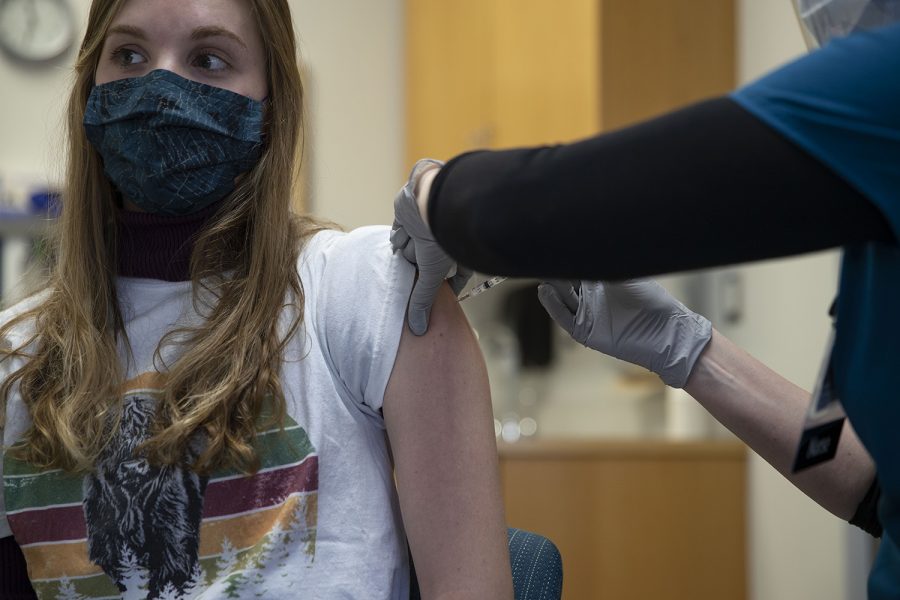 As Waale Gbara stood in line for her first dose of the Moderna vaccine, she thought about a patient she treated after a bout of COVID-19. The patient was a dynamic, high-functioning adult who exercised multiple times a week before catching the virus. Weeks after being contagious, Gbara said, her former patient still didn’t yet have the strength to stand up to brush her teeth.

“I’m hearing about people who continue to have a loss of smell or people who have irreversible lung damage. When I weigh the benefits and the cons of getting this vaccine, there’s just much less of a risk associated with getting the vaccine,” Gbara said.

Gbara is a fourth-year medical student studying at the University of Iowa’s Carver College of Medicine. Since she regularly interacts with patients as part of her studies, she qualified for one of the first rounds of vaccines the UI administered for students on Thursday. Student Health, the entity in charge of vaccinating students, expected to give the first dose of the vaccine to 500 students from various medical colleges by the end of a two-day clinic.

The vaccine rollout in Iowa has been slowed by a shortage in the state — according to the Washington Post’s vaccine tracker, just 6 percent of Iowa’s population has at least one dose as of Sunday. Only two states had a lower percentage.

In Johnson County, where there is a high population of caregivers — employees at Mercy Iowa City, UI Hospitals and Clinics, and the medical colleges — vaccinating the next priority tier could be slow moving in the area, public health officials have warned, even relative to the state’s position near the bottom for vaccine allotment nationally.

The next tier of vaccination eligibility begins today, which includes those older than 65, preK-12 workers, and first responders. Called Phase 1B, the new round of eligibility is sorted further into priority groups and is expected to take months. Iowans over the age of 65 number over 500,000.

UI nursing student Macy Griebel, who received the Moderna vaccine on Friday, works with hospice patients and said she’ll feel like she’s keeping her patients safer by taking the vaccine.

“I’m still wearing my mask and my shield and everything,” she said. “But it’s an extra protection for them.”

The general student population may not have a vaccine in the arm until the summer or beginning of the fall semester unless they are part of one of the state’s priority groups, said UI Student Health Associate Director of Operations Todd Patterson.

Patterson said the student health clinic sent out surveys to each medical college to sort students into tiers for who was at the highest risk for COVID-19 transmission. Those with direct patient care were prioritized according to state guidance, Patterson said. Student health is planning to complete similar drives in the coming weeks. The UI will also reach out to students and professors who qualify in Tier 1B. This includes College of Education students and professors doing field experiences in preK-12 classrooms.

On Thursday and Friday, Students checked in at a table at the Medical Education Research Facility to check they were eligible for the vaccine. Student health workers took temperatures and registered students in a database to organize a second dose of the vaccine in four weeks — Moderna’s requirement to reach 95 percent effectiveness.

Patterson said the vaccine is one of the largest logistical challenges student health has orchestrated. The agency was aided, he said, from previous plans harkening back to 2015 when student health organized vaccinations for 5,000 students in two days during a mumps outbreak.

One challenge is not to let doses go to waste. Friday morning, with students trickling in at a slower pace than Thursday, student health officials called in lower-tier pharmacy students who were on waitlists to receive the vaccine if spots opened up. Soon, the vaccination line lengthened as more students signed up for available spots.

There are more than 2,300 students combined in the Carver College of Medicine, College of Dentistry, College of Nursing, and the College of Pharmacy, according to fall 2020 data provided by the Registrar’s Office.

Not all medical students are waiting on the UI, however. Some are traveling elsewhere for the vaccine.

UI College of Nursing student Hannah Ceralde, who got the vaccine on Friday, said she’s expecting questions about the vaccine once she returns home. A second semester nursing student, she started her first round of clinical patient care at UIHC earlier in January.

“It’s pretty cool to even play the tiniest role in something so historically significant,” she said.