Two lending libraries housed in the Wesley Center in Iowa City are creating space for LGBTQ and radical literature to be readily available to the community. 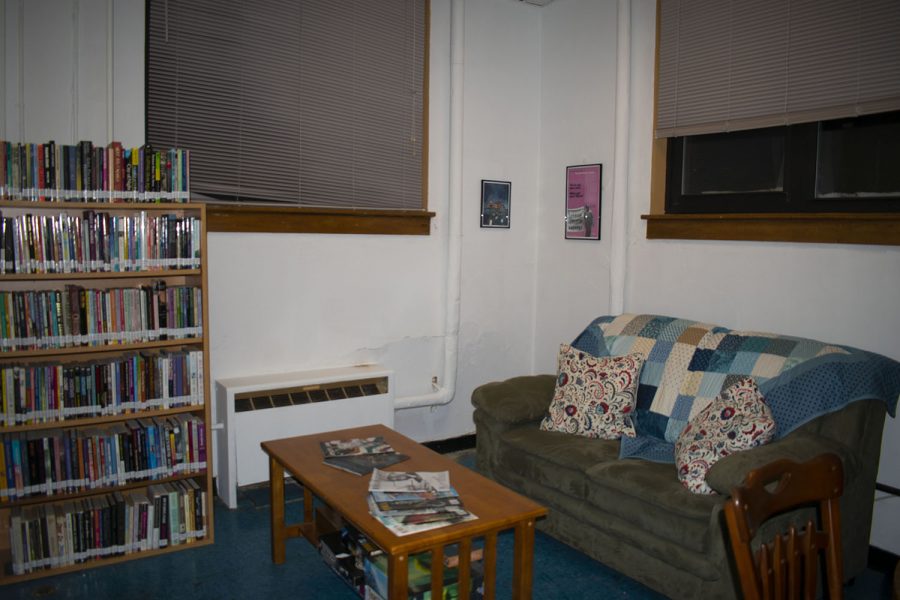 The LGBTQ Iowa Archives is seen on Wednesday, Jan. 27, 2021. The new library and archive is located in the basement of the Wesley Center.

University of Iowa graduate student Aiden Bettine didn’t know he needed a space devoted to LGBTQ history in his community until he began building one.

Bettine is one of the founders of the LGBTQ Iowa Archives and Library that opened in early January. While the idea has been around for a few years, Bettine said he, volunteers, and other founders began filling the lower level of the Wesley Center in Iowa City with books in November 2020.

The library has 1,200 LGBTQ books, Bettine said, and continues to receive donated literary works. He said the space gives people access to archives and stories they normally wouldn’t see in the same section of a library.

“There’s a deep sense of joy that this is happening,” he said. “There’s a deep affinity that this place is here and it’s happening and it’s prioritizing Iowa in particular …You don’t find these books all together in a room, unless you’re in a queer library. It’s not going to happen. But they are next to each other here.”

Bettine, a graduate student in the UI Department of History, said it’s important to have these books side-by-side regardless of genre or theme because it is empowering to know the depth and variety of print, LGBTQ history.

The LGBTQ Iowa Archives and Library is not the only lending library in the lower level of the Wesley Center. Bettine said the library is partnering with the Iowa City Radical Lending Library to showcase a vast collection of books.

UI sophomore Sydney Uhlman, who is studying history and religious studies, is a founding member of the Iowa City Radical Lending Library. They said there have been a few groups in the past who have unofficially traded literature similar to the books in the lending library.

“There have actually been a couple of informal arrangements of people lending out radical and abolitionist literature,” Uhlman said. “So, this library is a culmination of a few different people’s efforts to make that more accessible. To do that, we decided to create a formalized system.”

Uhlman said the library now has a physical space which allows people to access the books in person, but they are still offering contactless delivery and pick up because of the COVID-19 pandemic.

The Iowa City Radical Lending Library adds more than 60 books, zines, and pamphlets to the Wesley Center, Uhlman said. The library is possible because people are interested in donating and reading radical literature, they said.

“It’s a really critical time to read these radical and abolitionist texts,” Uhlman said. “It’s always been important, but lately there’s been more energy. We wanted to make sure that anyone who wants to, has access.”

UI English and American Literature Librarian Rita Soenksen wrote in an email to The Daily Iowan that expanding reading material in a community has long been beneficial.

Iowa City being a UNESCO City of Literature allows for increased book consumption, she wrote.

“​Libraries have long been an integral part of communities and I don’t think that will change,” Soenksen wrote. “The services that are available through libraries are critical in sorting through the abundance of information that is available … and books aren’t just read [in Iowa City], they are discussed, analyzed, shared, and celebrated.”

Abram (AJ) Lewis, a visiting assistant professor at Grinnell College, worked with Bettine early on to create the LGBTQ Iowa Archives and Library. Lewis said this space is especially valuable because it shows of LGBTQ communities can continue to grow in rural states and public spaces.

“Many LGBTQ Iowans don’t live near a space like a gay bar, where they can go and easily be part of a community formation in that capacity,” he said. “And there’s a number of reasons why someone may not want to. I think expanding physical spaces and ways of engaging around queer communities in an area where there’s not much institutional presence around LGBTQ issues and culture is really key, especially off campus.”

Creating spaces like the LGBTQ Iowa Archives and Libraries challenges the idea of archives, he said, because it expands who’s accepted in archival places.

“Archives are hyper-professionalized spaces, and they’re open spaces that are not necessarily very friendly to queer and trans people,” he said. “The spaces are handedly hyper-surveilled and tend to be places that have sex segregated bathrooms. Community archives can be really unique, welcoming, and affirming spaces for queer folks.”

The pandemic has halted the archive from becoming a community space due to the need for social distancing, Bettine said. The goal of the archive and library is to be inclusive and accessible, however, and he hopes one day the community can band together and celebrate the space.

“Anyone who is affiliated with the queer community in any way, this is space is yours,” he said. “It’s for you … We really want to serve every single person in our community and prioritize literature that would be affirming to them, to know and see yourself in a collection of books. And we’re waiting for the day we can invite everyone in, together.”