The efforts of 141-pound Jaydin Eierman propelled Iowa to victory. 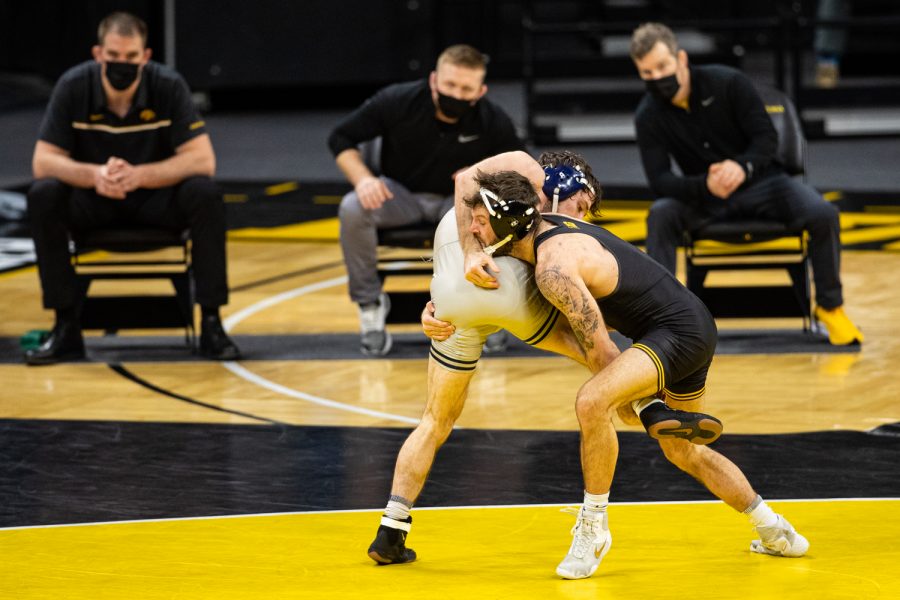 Iowa’s 141-pound Jaydin Eierman grapples with Illinois’ Dylan Duncan during a wrestling dual meet between Iowa and Illinois at Carver-Hawkeye Arena on Sunday, Jan. 31, 2021. No. 1 Eierman defeated No. 13 Duncan by tech fall in 6:05, and the Hawkeyes defeated the Fighting Illini, 36-6.

Before his bout against No. 11 Zach Braunagel of Illinois, 184-pound Nelson Brands walked to the mat as Kesha’s hit song “We R Who We R” pulsated out of the speakers at Carver-Hawkeye Arena.

Although the song only played for a few seconds before the dual’s eighth match began, one of Kesha’s lyrics rang out inside the arena — “Hot and dangerous.”

When the pop icon wrote the song in 2010, she likely did not have Iowa’s wrestling team in mind. But, inadvertently, the song does describe the Hawkeyes because they have been both “hot and dangerous” on the mat this season.

On Sunday, Iowa proved to be unstoppable once again, as it overpowered No. 9 Illinois, 36-6, to improve to 3-0 on the season.

Before the visiting Illini even produced a single team point, the Hawkeyes had already raced out to a 23-0 lead after the first five matches of the day.

Senior Spencer Lee registered his third pin in as many meets, 133-pound Austin DeSanto continued his dominant season, winning with bonus points for the third-straight time, and then No. 1 Jaydin Eierman stepped to the mat.

Eierman, a transfer from Missouri who, according to Iowa head coach Tom Brands, has a “funky style and likes to score a lot of points,” took an Olympic redshirt last season. So, prior to the start of the 2020-21 season, Eierman had not hit the mat collegiately since he competed at the NCAA Championships in March 2019.

On Sunday, Eierman held a 7-3 lead on No. 13 Dylan Duncan with 52 seconds remaining in the final period of his bout. Then, Eierman used a flurry of moves to put Duncan’s back on the mat and record a fall.

“That’s big and that’s Eierman,” Brands said. “The thing that set the cradle up was the straight-leg sprawl. That got [Duncan] really pressured to come up and that’s when you kind of take him off his own pressure. We had three falls today, those are important. They send a message.”

At Missouri, Eierman totaled 38 falls in his three seasons on the active roster. As junior at Missouri, “The Riddler” manufactured 17 pins, ranking him sixth in the Tiger history books for falls in a single season.

No. 3 Tony Cassioppi — Iowa’s 285-pounder — produced the Hawkeyes’ third fall of the day in walk-off fashion. The Roscoe, Illinois, native pinned No. 5 Luke Luffman in four minutes and 30 seconds.

Cassioppi’s win comes just a week after he fell to No. 1 Gable Steveson of Minnesota via major decision.

“We don’t worry about what we got in Tony Cassioppi as far as being able to bounce back or how level-headed he is,” Brands said. “We belong with the best in the world, that’s my opinion, and I’m going to need a little help from Tony himself to back that up. How’s that?”

The two losses Iowa incurred came from Nelson Brands and reserve Joe Kelly, who was filling in for Alex Marinelli at 165 pounds.

Marinelli is currently in the Big Ten’s COVID-19 protocol, which subjects student-athletes to a mandatory 17-day rest period following a COVID-19 infection.

“You people at home can look at a calendar, and I don’t need to tell you when [Marinelli is] going to be back,” Tom Brands said.

Next on the calendar for the Hawkeyes is a triangular meet with Ohio State and Purdue on Feb. 7.