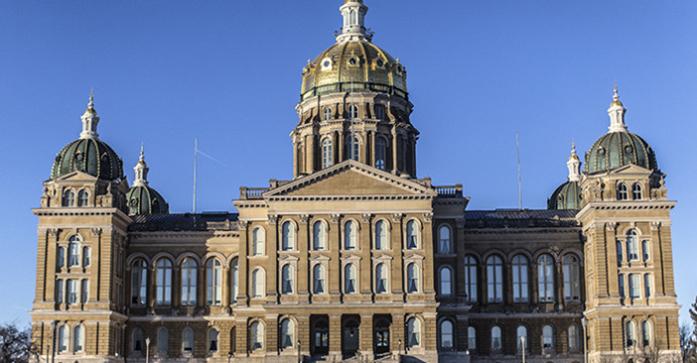 In the state House Government Oversight Committee’s first meeting of the year, University of Iowa College of Dentistry student Michael Brase, a self-described conservative, told the committee that the college suppressed his right to free speech, causing him personal harm in the process.

“Mr. Brase you were bullied, and I feel very saddened with the fact that you were bullied,” said state Rep. Jon Jacobson, R-Treynor, of the UI’s handling of what is being described as a free speech issue.

Brase hit ‘reply all’ on a college-wide email in October that condemned former President Trump’s executive order that aimed to “combat race and sex stereotyping and scapegoating” when it comes to education and diversity, equity, and inclusion trainings. Brase said he didn’t agree with the college’s stance, and his message prompted a flurry of responses from other students and faculty members.

Now, some Republicans on the state House Government Oversight Committee are using this as an opportunity to address their concern that conservative voices are being suppressed on the University of Iowa campus.

The Legislature became involved when Brase contacted state Rep. Steven Holt, R-Denison, after Brase was summoned to a disciplinary hearing by the College of Dentistry dean for unprofessional behavior. The hearing was then canceled with an apology from the college.

“I hope that regardless of your political party, people will see that it’s important that freedom of speech is protected,” Brase said. “For both sides all around this, this should be something that everybody rallies around, and that’s going to be the only way we can have productive conversations about things.”

Brase said that some people have reached out to support him in private, because they are fearful of how they will be treated by others on campus.

Some Democratic lawmakers on the state House Government Oversight Committee questioned if this issue was something the committee should be spending time investigating, and state Rep. Bobby Kaufmann, R-Wilton, who was the previous committee chair, said this is absolutely something that falls in the purview of the committee.

Brase said he wants to see accountability for what the UI faculty did in what he said was suppressing his right to free speech by attempting to punish him for responding to a college-wide email. It’s not clear what the dean of the college was intending on doing at the disciplinary hearing, but state Rep. Ruth Ann Gaines, D-Des Moines, said she received documentation of other students who were also summoned to a disciplinary hearing after they responded in the email thread.

The issue of free speech lies in the college’s decision to potentially take disciplinary action on students who voiced their opinions over email, and Gaines said she wants to hear from the other students who disagreed with Brase.

RELATED: ‘Isolated and anxious:’ University of Iowa dental students react to an email thread and remarks made within their college

“I don’t necessarily think [Brase] should have brought the complaint to us anyway,” Gaines said of Brase’s decision to contact legislators. “I think it should have been handled on campus, and also within the Board of Regents, but Republican oversight members think it’s appropriate to bring it up. We’ll just deal with it.”

Gaines, the ranking member of the committee, said there does need to be a clearer definition of what free speech is, and she said this investigation by the committee will show how divided the country is.

Because the UI receives federal funding, the administration decided to halt all DEI trainings for two weeks to make sure the trainings were in compliance with the order, which prompted controversy over the UI’s response to the order. That Sept. 22, 2020 executive order had polarizing affects on campus. Many students and faculty members had issues with the order’s language, because the order does not acknowledge the issue of systemic racism.

Kaufmann expressed strong feelings in advocating on behalf of Brase and other conservative students who allegedly feel they are being silenced on the UI campus.

The state House Government Oversight Committee will hear from UI officials in a committee meeting on Feb. 3. In the meantime, some students in the College of Dentistry are planning a march on Friday with Iowa City Black Lives Matter activists to call for more diversity, equity, and inclusion efforts in the college.