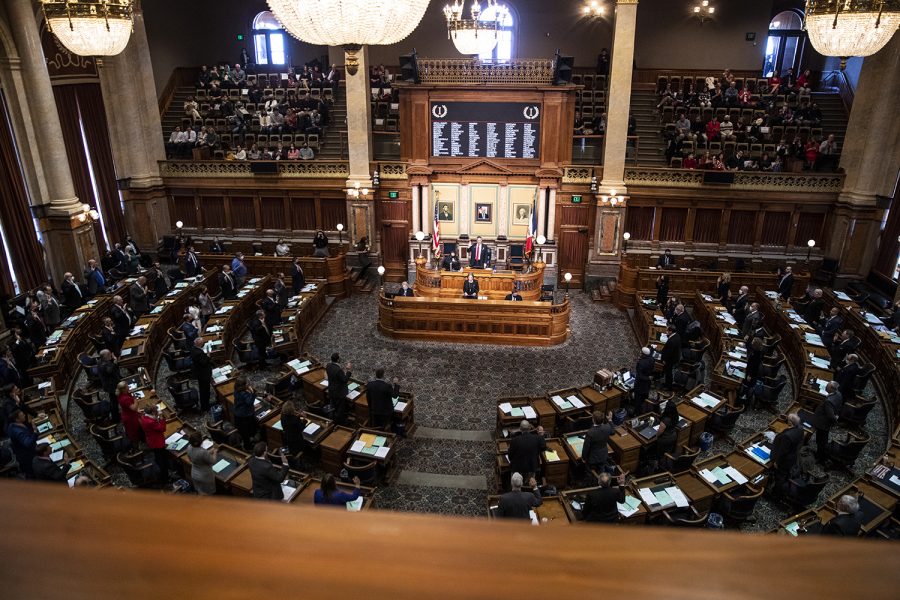 Members of the Iowa house of representatives take the oath of office during the opening of the 2021 legislative session on Monday, Jan. 11, 2021 at the Iowa State Capitol in Des Moines. Legislative goals for the session include further tax cuts, expanding in-person learning, and moving towards economic recovery from the COVID-19 pandemic.

Iowa lawmakers have recently pushed to bring back the death penalty, but execution has long been a problematic and cruel punishment that has no place in the Hawkeye State.

A bill introduced in the Legislature calls for a limited death penalty which would only apply to people convicted of kidnapping, sexually assaulting, and murdering a minor.

Although it would be a limited death penalty, there are already significant disparities between the incarceration rates for people of color and white people in Iowa. These disparities would most likely also be seen in death sentences.

Because of these disparities, Iowa should not push for a reintroduction of the death penalty —even if it is a limited one.

With the racial disparities already present in Iowa’s criminal justice system and the disparities with white versus Black people on death row, presumably, there would be a large imbalance between white and Black people sentenced to death in Iowa.

According to the ACLU, money is also a large factor that plays a part in death sentences. Many people being sentenced to death row don’t have the funds for skilled attorneys thus, they are more likely than those who can afford a skilled attorney to find themselves on death row.

There is also a history of people being sentenced to death and later being found to be innocent. One in 10 people are released for every death sentence carried out. Additionally, since the year 1963, 156 people from 26 states have been released from death row after being found innocent.

Outside of the moral and racial justice implications associated with the death penalty, a case involving the death penalty is on average more expensive than a non-death penalty case, according to analyses done of state Legislative documents by Amnesty International.

Many of the people opposed to the implementation of the death penalty stated how, as we are in the middle of a pandemic, there is not an abundance of resources to cover the cost of carrying out the death penalty.

In addition, although it may seem like it would, states with the death penalty are not found to have lower crime rates than states without.

The death penalty is already an often cruel and racially-charged punishment that our tax dollars do not need to be feeding into. Taking into account the current state of our country and our world, reintroducing the death penalty should not be on the to-do list for Iowa lawmakers.