Iowa swim and dive teams have impressive times in tri-meet

The men and the women had several strong individual performances against Penn State and Northwestern. 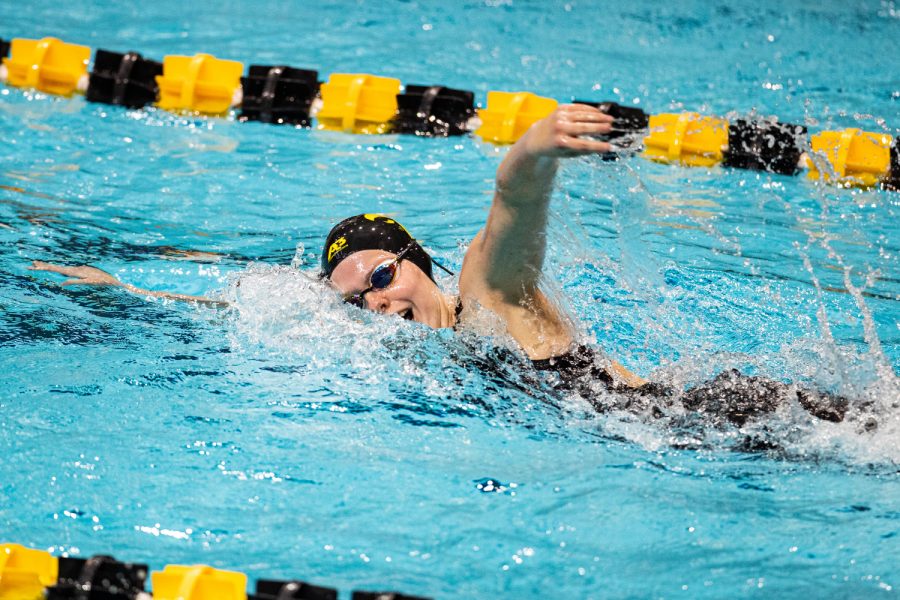 Iowa's Alyssa Graves competes in the women's 1000m freestyle during a swim meet at the Campus Recreation and Wellness Center on Saturday, Jan. 16, 2021. The women's team hosted Nebraska while the men's team had an intrasquad scrimmage.

The Iowa men’s and women’s swimming and diving teams made the trip to Evanston for a tri-meet against Penn State and Northwestern on Friday and Saturday.

The women’s team looked to build on the momentum from last week’s win over Nebraska, while the men’s team officially started its season after the cancellation of its opening meet against Wisconsin on Jan. 16.

Despite some strong individual performances, the women’s team went 0-2, falling to Northwestern, 225-75, and losing a tight one to Penn State, 153-146.

The first win of the meet for the women’s team came from freshman Alyssa Graves in the 1,000 freestyle, recording a time of 9:48.33 on Friday. She now holds the second and third fastest times in school history for the event after breaking her own second place record from Jan. 16. Graves also delivered second place finishes in the 200 butterfly and the 500 freestyle on Saturday.

Sophomore Julia Koluch had a strong showing in both the 100 and 200 backstroke. The Zelechow, Poland, native was the highest finishing Hawkeye in both events and finished second overall in the 100 backstroke. She plans to transfer to Houston after the season to continue her academic and athletic career.

The tri-meet for the women’s team ended with the 400 freestyle relay. Sophomores Kennedy Gilbertson and Macy Rink, junior Lauren McDougall, and senior Kelsey Drake put together a second-place finish with a time of 3:21.77.

On the men’s side, Saturday started with a first and second place finish in the 200 freestyle. Junior Mateusz Arndt won the race with a NCAA “B” cut time of 1:36.20, followed by fellow junior Andrew Fierke with a 1:36.80 time. Arndt and Fierke also took the top two spots in the 500 freestyle. Arndt recorded a time of 4:22.05 to win his second race of the meet.

Iowa’s junior class continued to impress throughout the day. Anze Fers Erzen took second place in both the 100 and 200 backstroke with times of 47.36 and 1:44.58, respectively. He finished the day with a victory in the 400 IM and a time of 3:47.95. Fers Erzen came out of all three individual races with a “B” cut time.

The women’s team will participate in another tri-meet on Feb. 5-6 against Nebraska and Minnesota in Minneapolis before the Big Ten and NCAA Championships.

The men’s team will have a dual against Minnesota in Minneapolis on Feb. 5-6 before the Big Ten and NCAA Championships conclude the season.