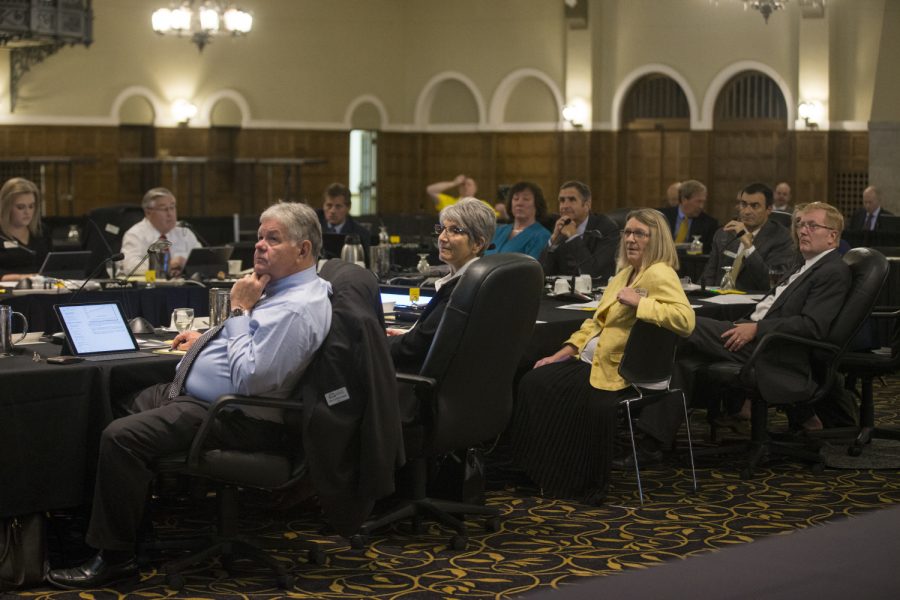 Board members listen during the Board of Regents meeting on September 12, 2018 in the IMU Main Lounge. Regents members discussed remodeling various buildings and sights across various Iowa campuses.

Representatives of the Iowa state Board of Regents proposed a 1 percent wage increase per year in its two-year contract negotiations with University of Iowa Hospital and Clinics caregivers, less than the 5 percent raise the union requested.

One week after UIHC’s chapter of the Service Employees International Union local 199 asked the board for a 5 percent raise per year, the regents responded with their proposal on Thursday afternoon.

Regents Chief Negotiator Michael Galloway, who is the spokesperson in collective bargaining negotiations, introduced the proposal and said the board’s proposal was a more “typical” proposal compared to the UIHC representatives’ proposal made on Jan. 13.

“We are proposing, obviously under the state statute, a two-year contract at a 1 percent general wage increase, each year,” he said. “I can say that we’ve had discussions and we appreciate the approach that SEIU took in that it appeared, from your presentation, the understanding that [there] really [are] things that need to be worked on between SEIU and UIHC. I want to strongly suggest that that is very important.”

Galloway said there are differences between the issues the SEIU representatives and union members have to deal with and the contract that the union negotiates with the board.

While issues like retention, recruitment, and work environment are important to UIHC employees, he said that is a conversation the union needs to have with UIHC administration.

As previously reported by The Daily Iowan, the only mandatory negotiation topic when it comes to collective bargaining is wages according to a 2017 law.

President of SEIU local 199 Cathy Glasson said in a message to the DI that the union’s biggest goal in collective bargaining conversations with the regents is to build a real partnership with the UIHC administration.

“Fair pay is just one part of our partnership proposal,” she said. “…All we want is to work with the employer to find solutions to all the challenges at UIHC. We’ll keep talking about this in the upcoming sessions because we want to put the slogan ‘We Stand Together’ into action.”

SEIU’s initial proposal was innovative, Glasson said, and the union’s representatives did not expect the regents to embrace it right away.

Dawn Shannahan, an educator in the Child Behavioral Health Unit at UIHC, said she was disappointed in the regents’ initial response to SEIU’s presentation.

“We understand your proposal,” she said. “But, we’re disappointed. We really would like to see this partnership continue and we appreciate that you’re pushing forward with management and whatnot, but we really do believe in the whole ‘We Stand Together’ slogan. We’re all in with that, so this is disappointing to us.”

Other SEIU representatives spoke up at the meeting and asked about specific parts of their presentation that weren’t responded to in the board’s proposal, including the safety of the UIHC work environment, losing quality nurses, and staffing issues.

Associate Counsel and Director of Human Resources and Merit Systems for the regents Kristin Bauer said she has been working with members of the regents to instigate conversations about the issues the UIHC caregivers discussed in their presentation.

“A lot of those things, as the board office, we are not going to be very helpful with,” she said. “As the administration at the hospital, they’re going to need a representative who’s going to be able to answer these questions you outlined in your presentation.”

SEIU and the board will continue to have conversations and contract negotiations in coming weeks, but dates have yet to be proposed or set for those future meetings.