Trailing by as much as six in the fourth quarter, head coach Lisa Bluder made a key defensive change that propelled the Hawkeyes to an 87-81 win over Purdue. 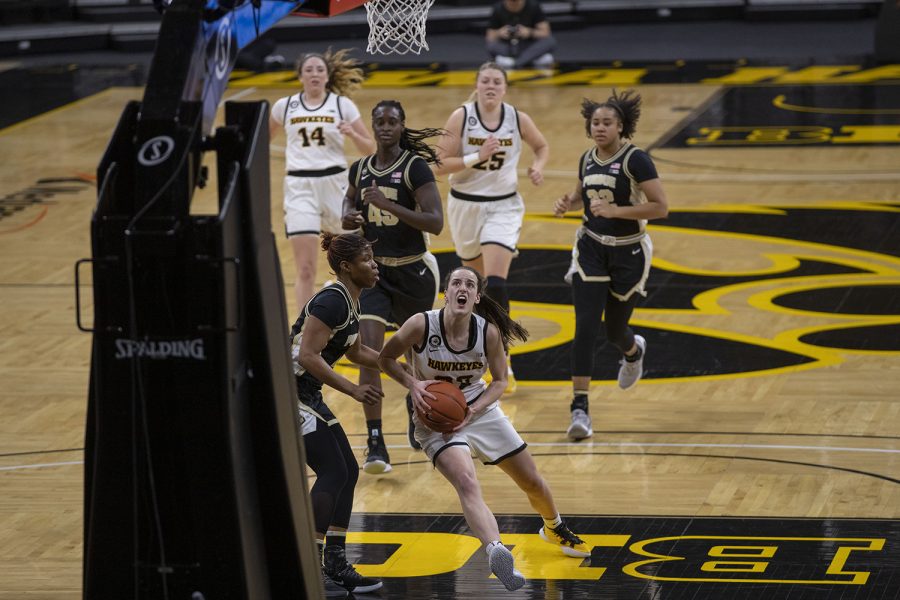 Iowa guard Caitlin Clark goes for a layup during a women's basketball game against Purdue on Monday, Jan. 18, 2021 at Carver Hawkeye Arena. The Hawkeyes defeated the Boilermakers 87-81.

Coming off a two-game losing streak, the Iowa women’s basketball team played from behind early in its matchup with Purdue Monday.

Unfortunately for head coach Lisa Bluder, her Hawkeyes also trailed by six points late in the fourth quarter. But, unlike Iowa’s last two games, Bluder’s bunch rallied from behind to win, 87-81.

In the final quarter, the Hawkeyes started off leading, 63-61, but then fell behind by six before coming back to take the lead on a 3-pointer from sophomore forward McKenna Warnock with 2:37 left in the game.

“[Junior center Monika Czinano] got some double-teams in the post because she has been doing really amazing, obviously, throughout the year and just found an open kickout and had a really good pass to me and just believed in me that I was going to make that shot,” Warnock said.

Warnock’s triple was a part of a 13-0 scoring run for the Hawkeyes that came after Bluder called timeout with under five minutes remaining in the game. Trailing 75-69, Bluder made some critical changes, especially on the defensive end of the floor.

“It wasn’t working what we were doing, basically,” Bluder said. “Go back to the play sheet and think of another defense that we can try because they really hurt our zone early and our play was working pretty well in the first half and then in the second half, they were eating that up pretty well.”

“We kind of went to a triangle-and-two defense and we flustered them with four-and-a-half minutes to go,” Clark said. “And credit to our defense, it was super good. We got stops and then we got easy shots around the rim.”

Clark said everything starts for the Hawkeyes on defense. She believes that, when the Hawkeyes are playing well on the defensive end of the floor, they’re a better team.

The Boilermakers had success from behind the 3-point line Monday, as they made 10 of their 24 attempts. Six of those made 3-pointers came from freshman guard Madison Layden, who only missed one attempt from that range.

“We had to do what we had to do to keep the ball out of her hands and slow the rest of them down,” Bluder said.

While 3-point shooting was a strength for the Boilermakers, the Hawkeyes found their success at the charity stripe. The free-throw line proved to be Iowa’s great equalizer, as the Hawkeyes converted on 25-of-31 foul shots, while Purdue made just 5-of-9 attempts from the foul line.

“We shoot free throws every single practice,” Clark said. “We’re in here working extra and free throws are easy points. They’re free for a reason. So, get to the line is what our focus is and always has been.”

The Hawkeyes return to the court on Thursday for a matchup with Maryland on the road at 4 p.m. The game will air on the Big Ten Network.