Iowa Republicans pledge to lower taxes ahead of legislative session

The Iowa Legislature opened their 2021 session Monday with Republican leadership describing what some of this session's priorities are and how the state hopes to recover from COVID-19. 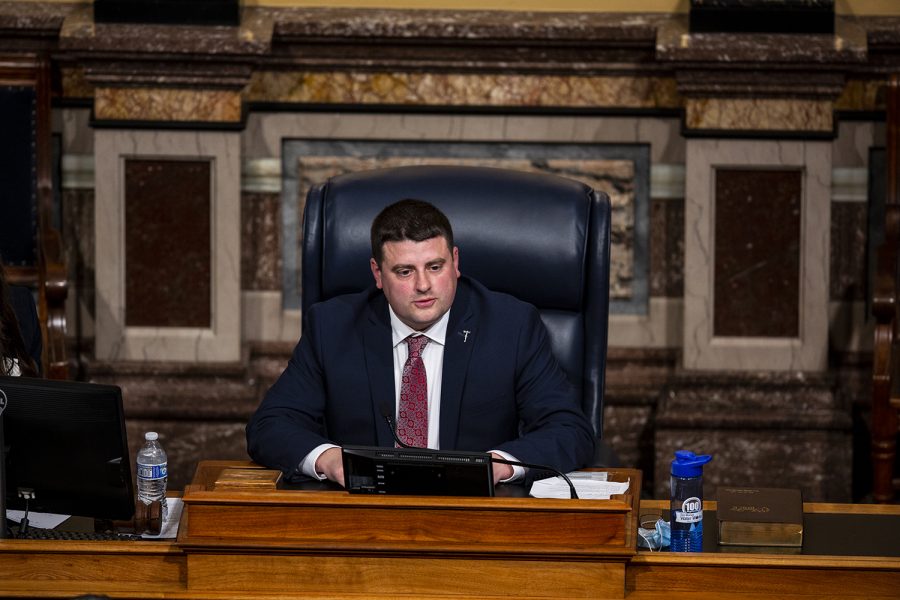 DES MOINES — As the Iowa Legislature convened on Monday for the beginning of its 2021 session, Republican leadership committed to lowering state taxes and not being quick to spend the state budget surplus.

House Speaker Pat Grassley said he wants to restore a sense of normalcy in the state after life was put on pause amid COVID-19. Getting Iowans access to affordable child care and getting children back into schools are other issues that the House hopes to find solutions for, along with lowering taxes.

“Iowans know that they can trust the same steady responsible leadership they have come to expect from House Republicans,” Grassley said.

This is Grassley’s second year as House Speaker. In his remarks last year, Grassley also highlighted lowering taxes as a top priority for Republicans, but that goal was pushed to the side once the pandemic set in. Iowa Gov. Kim Reynolds has said she’s pressed “pause” on her tax cuts legislation introduced last year that would have funneled money toward mental health and recreational services.

In his opening address, Grassley, a Republican from New Hartford, said that because of Iowa’s conservative fiscal measures, Iowa can bounce back more quickly than other states, and he hopes the state government can meet Iowan’s priorities and give back to taxpayers.

Iowa ended the 2020 budget year with a surplus of  $305 million, the third year the state has ended the fiscal year with extra dollars in the state’s coffers. Iowa’s reserve funds are also filled, totaling an estimated $770 million in September. Democratic lawmakers in Johnson County told The Daily Iowan in December 2019 that the surplus is a result of Republicans neglecting social services. In the 2019 budget year,  the state ended with a $289 million surplus. According to the December revenue estimating conference, the state’s general 2021 fund budget is expected to grow slightly — 0.5 percent — compared to the previous year and more — 4 percent — in fiscal 2022, the year lawmakers will be allocating funding for this session.

Senate Majority Leader Jack Whitver, a Republican from Ankeny, said in his opening remarks on the Senate floor that tax relief is always going to be a priority for his caucus, and that having a surplus doesn’t necessarily mean the Legislature should spend it.

Because of conservative spending, Whitver said, Iowa was ready and prepared for uncertain times.

“This does not mean we start raiding the surplus and recklessly spend what we have so carefully built up — it means we are prepared if revenues dip again and not enough money is available to keep the promises we made to public safety, health care, and education last year,” Whitver said.

Grassley said that while affordable childcare is an important issue to the Iowa House, they cannot just return to how things were before the pandemic because Iowans were unable to get affordable childcare even then. Instead they have to make new and improved strides toward offering assistance when it comes to childcare.

“Students remain trapped in situations that are not the best for them. It is critical to their mental health and wellbeing,” Grassley said.

House Minority Leader Todd Prichard, D-Charles City, said he wants to aid Iowans with long-term recovery through funding for schools, small businesses, and health care — not tax cuts. Seeing children get back to school means getting ahead of the pandemic, Prichard said.

“We would like to see support directly for workers and small businesses and see people that were not originally covered by the CARES Act receive support,” Prichard said.

To Prichard, the only way to recover from the pandemic and get life back to normal is to acknowledge that the virus is a serious danger to public health. The public needs to protect themselves and protect others, he said.

COVID-19 mitigation measures continue to be a divisive issue in the legislature, with Republicans opting to make masks a personal choice and Democrats advocating for stricter measures.

House Majority Leader Matt Windschitl, said that November’s election showed that Iowans want less government, more freedom, and for their tax dollars to work for rather than against them. President Trump won Iowa by nearly 10 percentage points. Sen. Joni Ernst was also reelected by a healthy margin and currently three of Iowa’s four Congressional representatives are Republicans.

“As we move forward this session, let us strive to advance policies and budgets that restores Iowans’ freedoms, and get the government off their backs,” Windschitl, a Republican from Missouri Valley, said on the House floor Monday.

Windschitl did not respond to The Daily Iowan’s request for further comment.

Senate Minority Leader Zach Wahls, a Democrat from Coralville, said that making a free vaccine available quickly and safely to Iowans should be the No. 1 priority for COVID-19 recovery. This is Wahls’ first year in the leadership position.

Wahls said that through the budget surplus and the economic emergency fund, there should be additional aid for health-care workers and small businesses. Food banks need additional help, he said, because more families are experiencing food insecurity.

“We need to make sure that we provide help to the people who need it,” Wahls said.”We need to get help to folks who are hurting: schools, communities, health care workers who can’t get a day off, we have a lot of work to do.”