Editorial | It’s everyone against fascism, and the fight isn’t over

This won’t end with a presidential removal or Inauguration Day. It’s up to the media, elected leaders, and all of us to create our antifascist America. 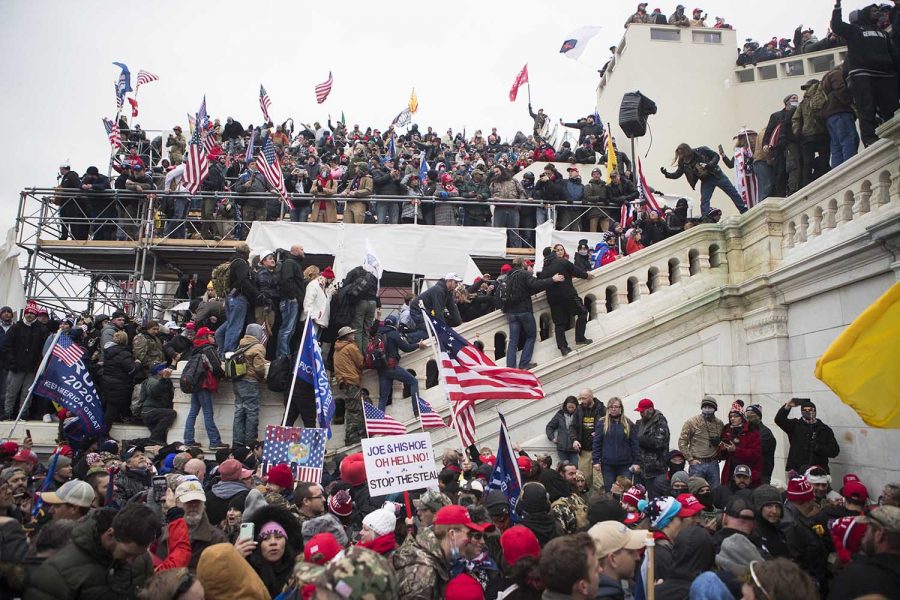 It isn’t really a question if the president should be immediately forced from office.

A wave of newspapers, politicians, constitutional experts, and citizens voiced their support for the president’s removal yesterday and today, and many more will follow. Whether it’s through a congressional impeachment process or Section IV of the 25th Amendment, he’s got to go.

We could go into detail about the case against the president — terrorism and insurrection are “high crimes” and his voraciously violent actions are the original definition of “misdemeanors.” Countless Americans, representing our nation’s vast spectrum of backgrounds and beliefs, have already made that argument.

The 12 and a half days left in the president’s term pose a real and permanent threat to American democracy, its republic, and its citizens. We can’t simply wait out the clock after our fascist commander-in-chief flailed with all his might to, somehow, be declared president. It needs to end now.

The rightful Acting President Michael Richard Pence has proven to be an inadequate bystander for nearly all of the past four years. He does not deserve anything that would be categorized as praise. But in Wednesday’s dark hours, the current vice president did his part to stop the siege on the U.S. Capitol. For 12 and a half days, he will suffice.

Both removal options offer advantages. Impeachment in the House and removal in the Senate would put every member of Congress on record — are presidents allowed to incite an insurrection, or are they not? Our federal lawmakers could accomplish the process over a day, but the presidential cabinet could execute the 25th Amendment within an hour.

Regardless of how — and many on Capitol Hill have articulated possibilities — we need a new head of government as fast as the law allows.

That’s the short answer, but the long questions remain. What do we do now?
What does the media do now?
We have to be antifascist.

From our aggrandized ideals of a free press to our very lives, the ideology of the president and his followers threatens us. We cannot morally tolerate or literally survive an authoritarian regime fueled by hateful ultranationalism and state-approved violence.

It is clear that the president made this happen. Without his rhetoric, the election certification would have continued as planned. Without his encouragement, the Capitol would have gone unbreached. Without his yearslong record of hate and violence, we would not be here trying to process treason on the eve of President-elect Joe Biden’s inauguration.

But without us, Donald Trump would have never become president.

We knew exactly what the millionaire stood for when first began his long-shot campaign in 2015. We knew his platform was nothing but an outlet for evil: anger toward immigrants, people of color, and anyone else who didn’t fit his narrow definition of a real American.

And we put him on the front page. And we put him on TV. And we wrote a bajillion columns and tweets and news alerts. Whatever good we thought we were doing — shining a light on darkness (perhaps) or just rushing to the most outrageous thing (more likely) — it was the wrong choice to make.

The media is a participant in politics as much as it is an observer. We all strive to seek truth and report it, and that takes many forms from breaking news and feature reporting to fact-based commentary and analysis. And now, we must recalibrate for this moment.

We can’t continue like we have. Journalism has never been infallible, and we must evolve to meet this new era.

If what we publish results in an insurrectionist mob — whose grievances are not only hostile, but entirely baseless — we haven’t done our job. Yes, there’s purposefully bad actors. And yes, a lot of the chaos is outside our control.

But the then-candidate showed us who he was, and we kept him in the race all the way to the White House.

To paraphrase a 76-year-old Woody Guthrie lyric, the president told the world around he would tear our union down. And, as the folk singer pleaded, “Good people, what are we waiting on?”
What does fascism do now?
The battle against fascism isn’t over; we have not yet begun to fight. The vileness will remain in our culture for the rest of this decade and beyond.

Even after the president released a video that condemned the violence and asserted Biden will be sworn in, the stain is set and it’s not going away.

Tens of millions of our fellow citizens believe and will continue to believe that November’s election was somehow “fraudulent” or “rigged” or “stolen” from them. That’s enough of a chronic problem even without the harm wrought by authoritarian governance.

A YouGov poll showed 45 percent of Republicans at least somewhat supported yesterday’s violence. We have to reckon with the fact that this kind of extremism isn’t just dangerous, it’s mainstream.

We also need to note that the Capitol Police facilitated the attack in Washington, and that the chaos would have continued without the belated National Guard response.

The police removed literal barriers to entry and stood by while the mob ransacked the congressional building. In contrast, federal structures were heavily fortified this summer during Black Lives Matter demonstrations. James Baldwin had it right in 1964:

“[When] any white man in the world says ‘give me liberty or give me death,’ the entire white world applauds. When a Black man says exactly the same thing, word for word, he is judged a criminal and treated like one.”

Others, including Biden, have made similar remarks. The insurrection happened because the state allowed it to happen. Our antifascist future can’t include this behavior. The Capitol Police Chief — who undermanned and underprepared the force — said he will resign, and many more must follow him.

America must be for all its people, and its people must be willing to defend it.
What do we all do now?
Perhaps “defend” isn’t the correct word. “Rebuild” might be more apt. Or better yet — “create.” We must create an America for all Americans.

It starts with recognizing our country for what it is, not what we wish it was. “This is not who we are” is the wrong conclusion when it’s what we’ve already done.

We are violent. We are reckless. We are emotional. We are loud. We are hopeful. We are still here.

There is a lot to change in America, and we have to create that change. We won’t simply legislate our way out of it. Some rote rules in news coverage won’t be a magic solution. Condemning the actions of traitors won’t change their minds.

There are no easy answers to these hard questions. To pretend otherwise is to be self-deluded at best and dishonest at worst. But aspiring to a new creation can be our first step.

Beyond our paragraphs of platitudes, Angela Davis said it better in 1997 when speaking on the legacy of the Civil Rights Movement:

“Institutional transformations happened directly as a result of the movements that people, unnamed people, organized and gave their lives.”

We need everyone against fascism, not just presidents and pundits, to create our future.

At this moment, leaders in Washington deliberate the immediate paths forward. The House is reportedly prepared to impeach if the 25th Amendment is not invoked. Some senators have also called for the president’s removal.

That is the right thing. It is the needed thing. And we at The Daily Iowan echo the call that millions of Americans have already made: End this presidency — now.