In a series of ten listening forums, students, faculty and staff shared what qualities are important for the next head Hawkeye to have. 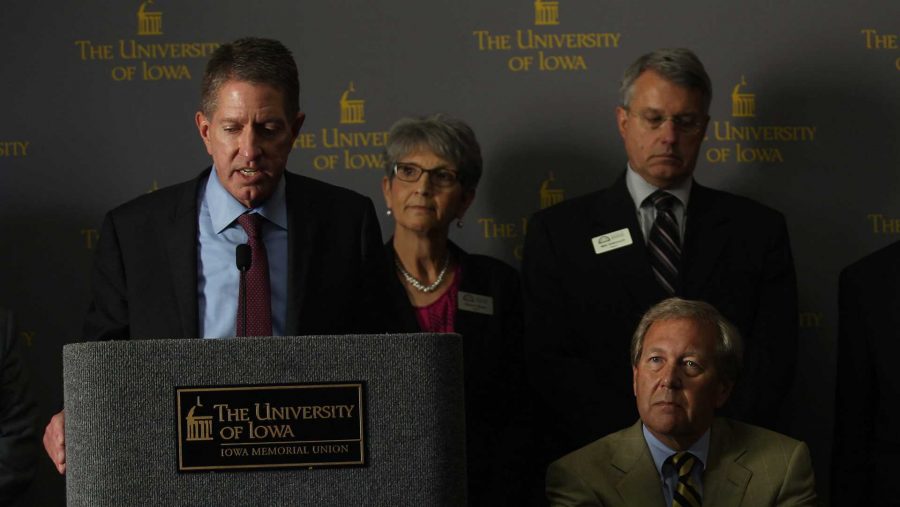 Former state Board of Regents President Bruce Rastetter announces the appointment of Bruce Harreld as the new UI president during a meeting in the IMU on Sept. 3, 2015. Harreld is the 21st president of the UI.

University of Iowa students, faculty and staff are hoping the next head of the Hawkeye community will come from an academic background.

Current president Bruce Harreld, who had no academic administration experience prior to coming to the UI, announced his retirement on Oct.1.

At a series of 10 virtual listening sessions held for UI students, faculty and staff, many expressed their thoughts on what qualities the next university president should have – several said the next president should have significant academic experience, as well as a strong commitment to diversity, equity and inclusion.

The forums were led by staff from AGB search, the Washington, D.C., based firm contracted to search for the president. Members of the Presidential Search Committee listened in.

Many speakers over the 10 forums attended by *The Daily Iowan* advocated for the next university president to come from an academic background and are familiar with student experiences.

“I believe the person should have a terminal degree in their field, so that they can really speak to the challenges our researchers face here at an R1 research institution. Having experience in research is very important – just understanding the challenges we face in that research in general on a national scale,” Assistant to the Vice President for Research Michael Weaver said.

When Harreld was appointed in 2015, many expressed disdain for his background in business and skepticism that a business leader could effectively lead an academic institution. Harreld held positions at Boston Market, Kraft foods and IBM before coming to the UI, but had no academic administrative experience.

Muhammad Hammmad Mazhar, a computer-science graduate student, said that the next president should be familiar with the academic process.

“Somebody who has not gone through that process and had just gone through pure administrative work or is pure business-minded, I don’t feel that I would be confident in their skills in leading a research university.”

A 21-member search committee, selected in November, is tasked with bringing finalists to campus. According to a tentative timeline, the next UI president will be selected by April, quicker than previous searches.

Angela Lamb, assistant director of academic support and retention for University College said she there was limited representation of employees on the search committee who worked directly with students outside of teaching and research positions.

“For students in general, there are large groups of students who don’t feel that they are being supported by administration. They don’t feel like they belong at the university, they don’t feel like they are being heard. To start the search process off in this way, it’s very concerning to me,” she said. “It would be very important to me that we look for someone who is familiar with best practices in the area of student success, values the scholarship in that area, and is willing and able to meet with students and to hear students.”

Many in the forums also expressed that the next leader should have a serious commitment to furthering diversity, equity and inclusion initiatives at the university.

“We would want a president who is committed to diversity, and not just token initiatives that are seen in DEI programs around the U.S where real change is often not pushed ahead, it’s often that concerns pushed by people affected by these initiatives are not taken into account,” he said.

Affordability was also a concern for students.

David Gerhard-Keffala, director of student services for Undergraduate Student Government, said the next president should be willing to connect to students and understand the financial burden students face.

“I think a person who can relate to the struggles of current-day students, someone who is able to understand the financial restraint of a lot of our student population, now I think is really important, because that relatability builds connection and community,” he said.

The meetings, held via Zoom, were only open to individuals with a HawkID, a personal identification number for UI students, faculty, and staff, Board of Regents spokesman Josh Lehman said.

“A HawkID was required to ensure only members of the campus community were able to participate. Everyone is able to provide feedback on presidential attributes and the search process via the university website,” Lehman wrote in an email to The Daily Iowan.

The next meeting of the Presidential Search Committee will take place on Dec. 30, where the committee will discuss presidential attributes and a potential description for the position.