Division I freshmen have a long list of obstacles to deal with, making it harder to dominate out of the gate. 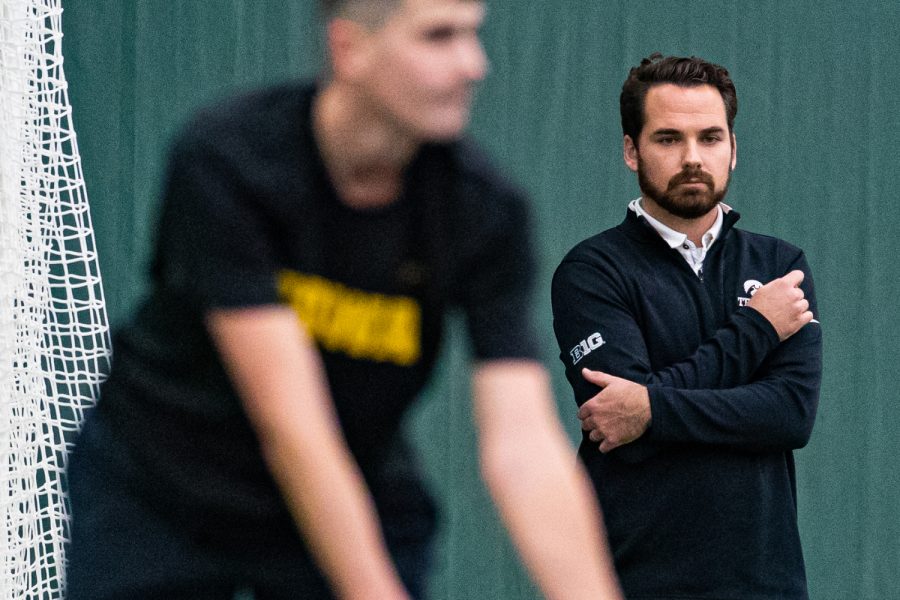 Iowa head coach Ross Wilson watches his team during a men's tennis match between Iowa and Texas Tech at the HTRC on Thursday, Jan. 16, 2020. The Red Raiders defeated the Hawkeyes, 4-3.

The transition from junior to Division I tennis has, historically, been difficult, and the Iowa men’s and women’s tennis teams will feature five fresh faces making that transition this spring.

Unlike some other Division I sports, it is very rare to see a freshman tennis player come to college and dominate out of the gate in a top-three spot in the lineup.

“College tennis, unlike a lot of other sports in college, is a worldwide sport,” head men’s tennis coach Ross Wilson said. “When you come to the U.S. and you play Division I college tennis, you are playing the best 18 to 23-year-olds in the world and not just in your country.”

Many of the top recruited junior players with résumés full of wins against the best competition at the junior level still come into college with habits that coaches look to break in order for the players to succeed at the next level.

Younger players tend to rely on their strengths and have not needed to work on switching their game plans mid-match.

“When you get to college tennis, everyone is good, so you can’t just rely on talent,” head women’s tennis coach Sasha Schmid said. “You need to be mature — you need to think through strategies, and you need to solve the puzzle that each match presents to you.”

Out of the 21 players on the Hawkeye men’s and women’s tennis teams, 12 of them are international students. International junior tennis differs from the system in the U.S. in terms of playstyle and travel, which can make it harder for international players to adapt in their first college season.

“In the U.S., it is a lot of first-strike tennis with big serves and big forehands,” Wilson said. “If you are coming from places like Germany, France, and a lot of places around Europe, they grew up playing on red clay, so they are playing a little bit further behind the baseline and are trying to have good height on their balls, be athletic, and make the points long and grueling.”

Wilson said that Iowa’s men’s team purposefully does a lot of recruiting in the United Kingdom as the juniors there play more indoor tennis and have a playstyle that works well in The Big Ten.

International freshmen also have to deal with the obstacles of adapting to an entirely new culture and education system on top of playing for a team rather than as an individual.

“When you come to college tennis you start to have this awareness of how your actions affect others on the team,” Schmid said. “Especially when you are playing a team dual, there is a certain amount of energy that is contagious.”

Freshmen coming to play for the UI are typically graduating high school as state champions or have spent much of their career as the best players in their area. The adversity they face when playing at a higher level of competition for the first time is something that many of them have never had to deal with before.

“When the guys get here in the fall, they usually stumble in the first tournament or two, and I think that gets their attention,” Wilson said. “Usually by November guys understand that it doesn’t matter if you are playing the No. 6 guy from Western Michigan or the No. 3 guy from Ohio State, everyone is going to come in and compete hard and every match is going to be tough.”