The University of Iowa Undergraduate Student Government advocated for a pass/no pass grading option this fall, with administrators ultimately deciding against it. 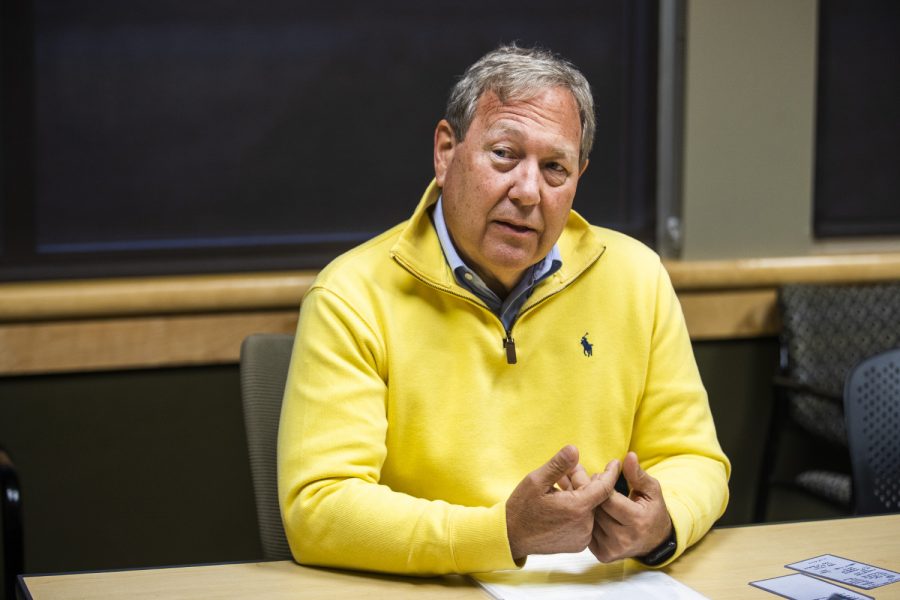 UI President Bruce Harreld answers questions during an interview with The Daily Iowan in the Adler Journalism Building on Monday, December 9, 2019.

University of Iowa President Bruce Harreld cited a negative impact to the academic future of students as the reason behind his lack of support for a pass/no pass option for the fall 2020 semester.

A pass/no pass grading option can negatively affect students as they apply for graduate and professional programs, Harreld said in an interview with The Daily Iowan on Dec. 11.

“My real concern is — do we understand the long-term consequences?” Harreld said. “Have the students really thought about how important grades might be in applications to something downstream?”

Harreld said he has previously served on a graduate and professional school admissions committee. When determining which students get into the program, he said, ranking is often important and a student’s grades help determine that ranking.

“There were some institutions and individuals that took a lot of pass/fail courses, and you couldn’t rank them relative to others, and we actually put them over in another pile,” Harreld said. “So, we’ll come back to them after we fill up the class, and I think that’s a dangerous zone for some people to be in.”

Harreld said he doesn’t make the decision whether a pass/no pass grading system is offered. That’s up to the provost, faculty members, Faculty Senate, and accreditation agencies.

A campus-wide email sent on Dec. 2 reminded students that the university would not offer a pass/no pass grading option but would extend the last day to drop or withdraw from a course to Dec. 18 and would add a notation to fall 2020 transcripts acknowledging that COVID-19 may have impacted a student’s grades.

UI Undergraduate Student Government members have advocated for the university to offer a pass/no pass system since the beginning of the summer. A survey conducted by USG — completed by one-third of the undergraduate student population — found that 82 percent of those surveyed would “definitely or probably” use a pass/no pass grading option for the fall semester, The DI previously reported.

USG President Connor Wooff told The DI that he and other members of student government considered and understood the caution behind not offering pass/no pass because of the negative impact it could have on students getting into post-undergraduate programs.

Wooff said the USG survey showed that students cited mental health, family challenges, personal health, and virtual classes that they’re not used to as some of the reasons they would want a pass/no pass grading option.

“We get that there’s a desire for students to have the grades that they’re getting in their class, but we also know that this is an extremely abnormal semester where I don’t think, for a long time, any admissions boards for graduate programs will be forgetting what happened in 2020,” Wooff said.