The decision is one of several Harreld is offering to leave to the next president — which a presidential search committee is expecting to select by April 30. 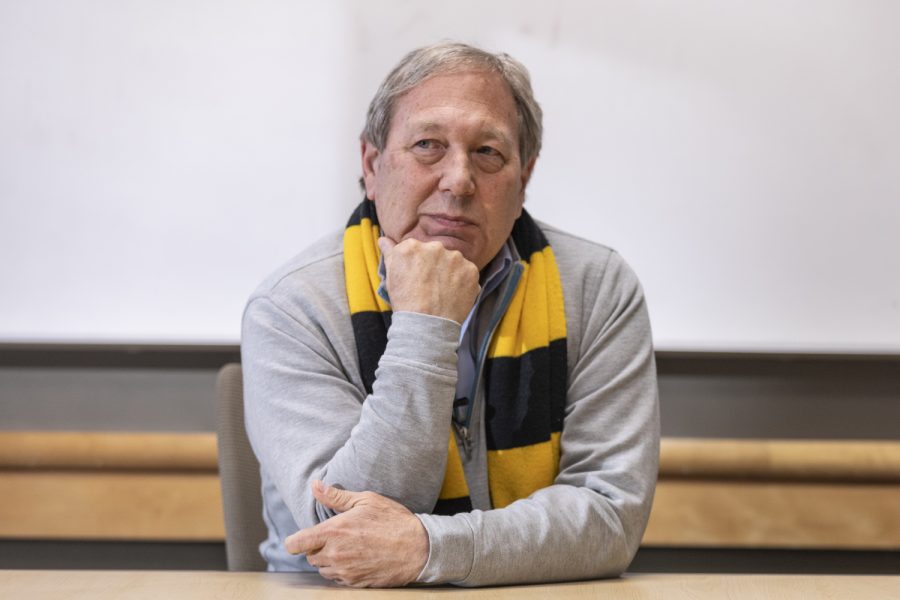 University of Iowa President Bruce Harreld said he recommends that the next associate vice president of diversity, equity, and inclusion selected should report to the president, but that  Harreld’s successor has the right to make the final decision.

After the announcement of Harreld’s early retirement in October, candidates for associate vice president for DEI withdrew, and the search committee disbanded.

Initially, Harreld and the search committee did not change the reporting structure citing that the change would delay the search for a new leader in that position. Members of the disbanded committee then recommended that the next head diversity, equity, and inclusion officer, which leads the three campus units of the Division of Diversity, Equity, and Inclusion, report to the president. The recommendations, outlined in an Oct. 22 letter called for the next person in that role to have “necessary authority, resources, job security, and regular access to senior leadership to catalyze DEI‐related change.”

“Now that we’ve canceled the search and it has to start all over, it’s going to take as much time,” Harreld told The Daily Iowan in a Dec. 11 interview. “I would actually recommend that it does report to the president, but I will tell you the number of other organizations that do not have [the DEI position] reporting to the president.”

In a 2019 DI review of the UI’s peer universities’ organizational charts — which spells out the reporting structure of administrators — roles similar to the UI’s associate vice president for diversity, equity, and inclusion in seven of the 10 schools reported to the president instead of the provost or a vice chancellor.

But ultimately, he said, that’s a decision he will leave to the next president.

If the UI and the Board of Regents follow the tentative timeline set out by the search committee,  the next UI president will be selected by April 30. Harreld said the search process is faster than other searches he has seen and heard about at different institutions. Whatever direction the next head Hawkeye chooses to lead the UI, he said, he will agree and help them make it happen.

Harreld said after the next president is selected, he plans to stick around as long as they want him in order to show them the ropes. He added he doesn’t want the search committee to feel rushed.

“I want them to take their time to find the next great leader for the institution,” Harreld said. “I will help that individual transition into the role, and that could take a week — that could take a month. It’s up to them.”

Initially, the search committee for the position recommended to Harreld that changing the reporting structure to the president would trigger a new search, delaying the naming of a new leader of diversity, equity, and inclusion on campus.

“The search committee said, we do not want to restart the search. We have great candidates. And we think we will be able to get a top notch long term leader to campus. I said ‘fine,’ I then a few weeks later started my retirement… The search firm said something that I still struggle with, which is even though it’s reporting to the provost, few candidates will be interested in pursuing the University of Iowa until they know who the next president is. Hmm, OK. Why didn’t you say that to me earlier?”

The UI began the search for a new leader in its diversity, equity, inclusion efforts after Tajuan Wilson resigned in August 2019, after six weeks in the position. Before his brief tenure, two interim officers filled the role after Georgina Dodge stepped down in 2017.

After Wilson’s departure, the three leaders of the division — the Center for Diversity and Enrichment, Diversity Resources, and the Office of Equal Opportunity and Diversity — began to report to the Provost’s Office. Dodge, who held the same role under the chief diversity officer title until the summer of 2017, reported directly to the president.

Harreld said at other organizations he’s worked for in the past, the highest-ranking DEI officer is a critical component of a human resources team to work on recruitment and retention.

For the rest of his tenure moving forward, Harreld says he hopes to support Tovar in her leadership efforts.

“She’s fully invested. She’s doing a great job, I get great reports of the broad membership of the community. And I think very importantly, when I talk with her, she’s not viewing just as a little piece of time, or just as an interim. She’s really, really making a difference and doing it for the long term.”

Russell Ganim, the co-chair of the disbanded search committee, reiterated the letter’s points and said that the person assuming the DEI leadership position at the UI must have the necessary authority, resources, job security, and regular access to senior leadership to catalyze DEI-related change and help create an anti-racist campus and community.

He said he would only change the reporting system if there was something that could not get done without his leadership.

“I talk to Liz [Tovar] on a frequent basis and I have no concerns,” Harreld said. “She’s got my number, and calls direct, we meet frequently. So, I don’t know what that solves other than optics. I want to leave it to the next president to do what she or he thinks is appropriate. And I think if I move it now, it’s kind of jumping it, which may not be fair.”

As previously reported by the DI, two professors of color voiced their frustration with the UI’s response to Black Lives Matter protests in June after a Faculty Senate meeting on Dec. 8. The Faculty Senate proposed to approve two measures related to DEI at the meeting.

Assistant Professor of Sociology and African American Studies Jessica Paige, who also serves on the Faculty Senate, told the DI that when it comes to diversity at the UI, it feels like “we are on a plane with no one flying it” because of poor recruitment and retention numbers.

“I’m glad they spoke up. It’s interesting that I haven’t gotten an email from them to sit down and talk,” Harreld said. “Having said that, we have a big table and everyone is welcome to it.”

Harreld said there has been a fair amount of surveying, town meetings, and a DEI action plan, spearheaded by former Vice President for Student Life Melissa Shivers in 2018 and updated each year since, to constitute broad community input.

The UI College of Liberal Arts and Sciences 2020 DEI annual report released this week shows 3.2 percent of staff identified as members of an underrepresented minority. From 2015 to 2020, the percentage of faculty within the college that identify as members of an underrepresented minority rose from 8.1 percent to 9.2 percent, according to the report.