An independent review released to the Iowa Democratic Party State Central Committee found that the last-minute implementation of a new app was responsible for delayed results on caucus night. 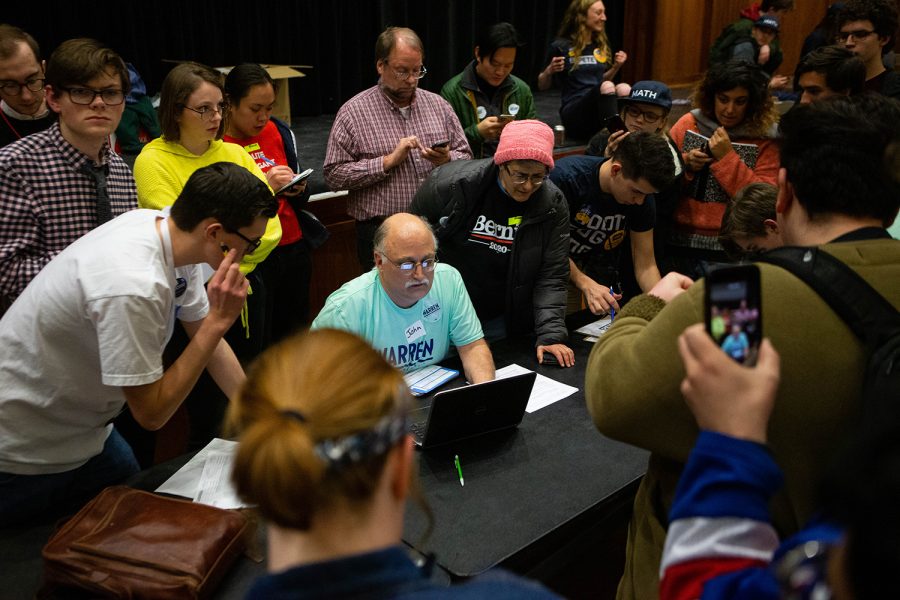 John Deeth, volunteer from Johnson County Democrats, recounts before assigning delegates during the caucus at the Iowa Memorial Union on Monday February 3, 2020.

The Iowa Democratic Party State Central Committee received the findings of an independent, internal review of the 2020 caucus reporting delays, concluding that last-minute pressure from the Democratic National Committee and sloppy implementation by the IDP were responsible for delayed results.

“There are moments when the stars are not in alignment and we experienced one of those,” Campbell said at a Saturday press conference.

In response to pressure from the Democratic National Committee, the Iowa Democratic Party set out to develop a virtual reporting system for caucus night while trying to implement additional measures from the DNC.

The IDP implemented a reporting app created by company Shadow, and human errors in the reporting app on the night of Feb. 3 caused caucus results to be delayed by almost a week while precinct chairs hand counted Iowans’ preference cards.

The chaotic night drew national attention, leading to the resignation of former IDP Chair Troy Price and many questioning the caucuses’ effectiveness.

Former South Bend, Indiana Mayor Pete Buttigieg was eventually declared the winner of the caucuses by the party, but the confusion and mistrust in the process led the Associated Press to not declare a winner.

The IDP experienced delays in the procurement of the app early on while trying to meet the DNC’s requirements.
The IDP started development of the app too late and did not have the right tools and infrastructure in place on caucus night.
There was a lack of training on how to use the reporting, no training on app installation, and users had to navigate the process on their own without adequate support.
The development delays are not all attributed to the IDP, but the DNC, because the DNC withheld their decision on a technology proposal for many months.
The coding error can be attributed to IDP’s Shadow database coding flaw.
The reporting app performed as intended and was not hacked.
People on the ground had issues using the technology, including not being able to access the web tool for volunteers to insert data and a high influx of calls.
The initial cause of delayed results was the faulty database conversion tool the IDP directed Shadow to create, which was also approved last minute by the DNC.
The DNC required access to raw reporting data and notified the state parties just a few weeks before caucus night.
The IDP failed to manage expectations with the media, as it was a clear expectation by the media that they would receive results on caucus night.

Klinefeldt and Campbell said they spoke with presidential campaigns, the company Shadow, county and precinct chairs, and IDP employees. Klinefeldt said the DNC would not respond to requests for interviews and did not give a reason why.

She said their mission was not to save the Iowa caucuses, but to collect information that will help the IDP correct its errors for the next caucus night.