The committee plans to hold input forums in the coming weeks and ultimately select a University of Iowa president by April 30, according to a rough timeline presented Friday. 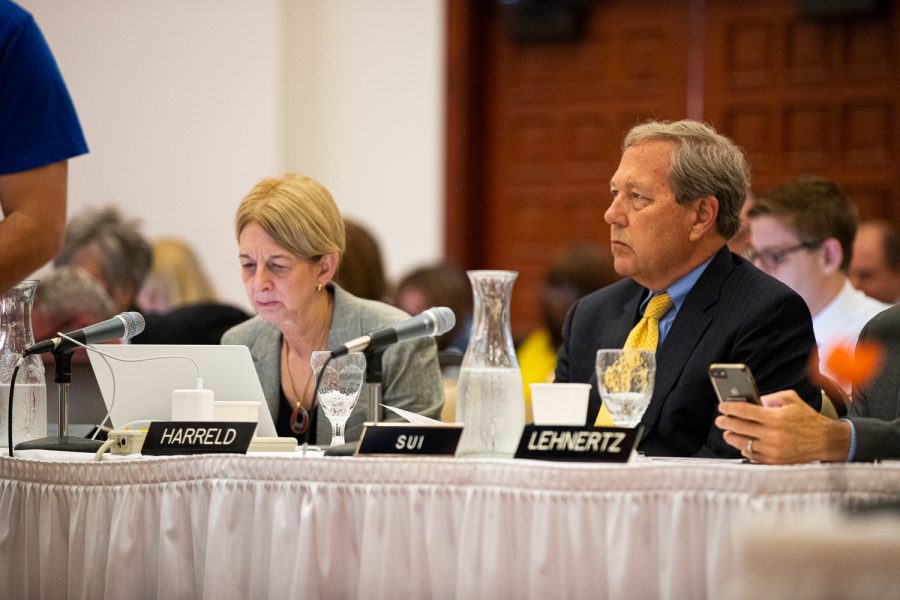 University of Iowa President Bruce Harreld and Interim Provost Sue Curry listen to a presentation during an Iowa Board of Regents meeting at the Iowa State Alumni Center in Ames, Iowa, on Thursday, June 6, 2019. The Regents voted in favor of a four percent tuition increase starting in the fall semester of 2019.

The search for the next University of Iowa president could wrap up as soon as April 30, according to a draft timeline of the search process for the next head Hawkeye that was released Friday.

From offices and homes, the UI’s Presidential Search Committee completed its first meeting via Zoom on Friday morning, setting its timeline and operations for the search for the university’s next president.

The timeline draft for the search presented at the meeting said that the search committee will report to the regents and executive director to interview the finalists and ultimately make the selection of the new UI president on April 30.

Listening sessions with the UI campus community are set tentatively for Dec. 7-20. Applications for the position are due March 15 and finalists would be identified in early April, according to the timeline. State Board of Regents Executive Director Mark Braun said the committee’s agenda guidelines can change throughout the course of the search to ensure the search is successful.

“The board wants the committee to bring quality candidates. If the timeline needs to change in order to accomplish that goal, the timeline can change,” Braun said.

The 21-member committee was introduced to how the search will proceed, two months after the state Board of Regents formally approved UI President Bruce Harreld’s plan for retirement.

Harreld told the DI in October he announced his retirement nearly two years early to set in motion the search process and give the regents ample time to select a successor. He said he would stay through the end of 2023 — when his contract ends — and longer if necessary.

“Then COVID-19 came around,” Harreld said in an October interview. “And I started talking to other people in the industry, saying ‘What’s happening with searches at the presidential level?’ And most people said it was taking a lot longer.”

The regents appointed Harreld president in September 2015, nine months after previous President Sally Mason announced she would retire in January of that year. The current draft timeline would select a new president about six months after Harreld’s retirement announcement.

Committee co-chairs Sandra Daack-Hirsch and John Keller introduced the process and a rough timeline for the committee to bring in candidates.

Daack-Hirsch said the committee will hold forums in the coming weeks and encourage members of the UI and the Iowa City community to participate in the process. The focus of the forums and listening sessions, she said, will be to receive input from people outside of the search committee about what they are looking for in the next top Hawkeye.

“We’re going to try to take advantage of meetings that are already existing,” she said. “For example, for the president’s cabinet and the dean’s council.”

The co-chairs will attend every forum, Daack-Hirsch said, but two or more general members of the committee are expected to sign up and attend listening sessions, as well.

The committee members also met the search firm representatives that will be assisting with the search, Washington, D.C.-based AGB Search. The members of the search firm who attended the meeting were involved in several Midwestern, public universities’ presidential searches in past years.

Since COVID-19 required the search to move virtual, the committee ran into a few roadblocks during the meeting, with people talking over one another and some suffering computer malfunctions. Daack-Hirsch said they plan to continue to use all of the features of a virtual format to ensure everyone on the committee is heard and not spoken over.

At the two hour meeting, members of the committee suggested what they’re looking for in candidates for the 22nd university president.

UI Professor of Pharmaceutical Sciences Aliasger “Ali” Salem encouraged the committee and the search firm to find someone with a variety of experiences that will drive their tenure at the UI.

Salem also suggested the committee looks for individuals who are committed to furthering the structure of shared governance, student academic freedoms, and faculty tenure.

Considering the pandemic, committee member Sue Beckwith said the UI needs a president with sufficient skill and experience to manage a crisis. Beckwith also called for candidates to have the communication skills necessary to effectively communicate with potential campus partners, the public, and the media.

“I would like to see some documented DEI competency,” she said. “Certainly some activity in the area, but action that’s effective [as well]…I think it’s necessary.”

Daack-Hirsch and Keller plan to continue updating the search committee’s website on the committee’s plans and proceedings. They said most meetings will be held on Fridays since it is the easiest way to work around students and faculty members’ schedules.

The committee has not announced when they will be meeting next.