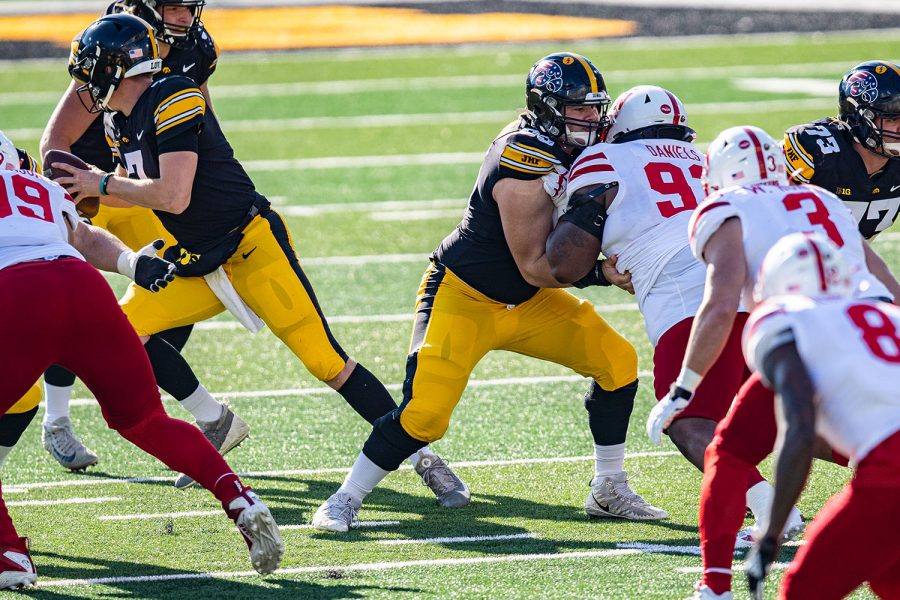 Iowa center Tyler Linderbaum throws a block during a football game between Iowa and Nebraska at Kinnick Stadium on Friday, Nov. 27, 2020. The Hawkeyes defeated the Cornhuskers, 26-20.

Once a defensive lineman and now an elite center, players like Tyler Linderbaum are ‘few and far between’

Kirk Ferentz call centers the MVPs of an offense, and luckily for Iowa, it has one of the best in the nation.

Tyler Linderbaum has only been Iowa’s starting center for 19 games but is already one of the best players — if not the best — at his position in the nation. The characteristics necessary to attain that level of success were apparent in Linderbaum from an early age.

Mark Sovers, who was Linderbaum’s elementary physical education teacher in Solon, saw an energetic child who had high expectations for himself. Years later, when Sovers was one of Linderbaum’s coaches for football and track and field at Solon High School, he saw something else in Linderbaum.

“The one thing I noticed when he came to high school was the impact he had on his peers and just the relationships he was able to build with them,” Sovers said. “And I think that really helped him really be successful as he went along. He just valued those relationships with his peers and brought them to the same level that he expected out of himself.”

Linderbaum, a defensive tackle recruit who now suits up as Iowa’s center, is rated as the best at his position in the Big Ten and in the nation, according to Pro Football Focus. After his performance against Michigan State this season, Pro Football Focus ranked him as the top performer for prospects heading into the 2021 NFL Draft, though Linderbaum doesn’t know what he’ll do after the 2020 season quite yet.

The redshirt sophomore is too focused on dominating the line of scrimmage this season.

Linderbaum, one of Iowa’s two team captains on the offensive side of the ball, allows his starting quarterback, Spencer Petras, time to throw, and the Hawkeye running game to excel. He rarely doesn’t execute an assignment to perfection.

That’s something Kevin Miller, his high school football coach, saw. Miller said he can count on one hand the plays Linderbaum took off in high school.

In Linderbaum’s second season as Iowa’s starting center, the 6-foot-3, 289-pound offensive lineman has helped make the Hawkeye front five one of the best in college football in recent weeks.

Iowa totaled 405 yards of total offense, including 226 rushing yards, in a 49-7 win in Week 3. Linderbaum made a key block on a 71-yard run by Tyler Goodson. As Goodson got past the line of scrimmage, Linderbaum blocked a linebacker, steering him away as Goodson broke free.

The Hawkeyes tallied 235 more rushing yards in the following week in a 35-7 win at Minnesota.

The consistency continued in Iowa’s 41-21 win over Penn State, when the Hawkeyes scored four rushing touchdowns. Goodson scored a 10-yard touchdown against the Nittany Lions. When he stopped running, Linderbaum was the first to congratulate him.

“That’s kind of our mentality, we got to get the ground game going,” Linderbaum said. “It starts up front, it starts with us five and the tight ends and the running backs hitting the holes.”

The running game is succeeding despite two starters from the beginning of the season — right guard Kyler Schott and right tackle Coy Cronk — missing time with injuries this season.

Cody Ince and Mark Kallenberger, the latter of which is now injured himself, have had to replace those players, and Ince has lined up right next to Linderbaum.

“It makes things on the field a little bit easier and he’s a great communicator on the field,” said Ince, who plays guard. “Definitely helps out with having your first opportunity in the game as a starter, kind of calm your nerves a little bit, and kind of guide the unit in a positive direction.”

Even with his clear competitiveness, Linderbaum is known to be a funny guy around his teammates, and is a chill guy, Petras said. During their first year at Iowa, Linderbaum played the video game Call of Duty with Petras and receiver Nico Ragaini.

Linderbaum showed them how good he was at that game, catching Petras’ and Ragaini’s attention.

“[He] had like a 50-game kill streak with only one death,” Petras said. “It was crazy good. At that point, we were like, ‘Whoa, this guy’s pretty good.’ We both see the world pretty similarly. We both love football, both on the same page there. He’s just a great guy to be around.”

Petras, the first year starting quarterback, also appreciates having Linderbaum as the anchor of his team’s offensive line. Iowa’s offensive identity includes quarterback sneaks, and Linderbaum helps Petras succeed on those plays by getting low on his man and driving him as far back as he can.

The starting quarterback is one of Linderbaum’s roommates.

“He never likes to watch highlights or anything like that,” Petras said. “Any kind of praise I give him he’s like try to beat me up after, he’ll make me like one of those d-linemen whenever I try and give him any props or anything.”

It shouldn’t be surprising that Linderbaum is all over the field when executing a great block week after week.

Miller said in high school, Linderbaum played scout team receiver from time to time, though he was an offensive and defensive lineman on game days.

“He could have played at almost any position,” Miller said.

“He had a lot of the natural athletic ability that you’re looking for,” Sovers said. “He had that explosiveness and that quickness. In fact, when he came to us from junior high, one of his goals was to play quarterback when he came in as a freshman because he had a really strong arm and he could throw it a long ways. He just wanted to use that athletic ability. You could see it come through in everything he did because he never did anything that wasn’t full speed or at 100 percent.”

That explosiveness and quickness is useful to Linderbaum in the Big Ten, as he uses those skills for reach blocks and to get great leverage on his man.

As his track and field coach, Sovers saw Linderbaum as a thrower. Linderbaum qualified for the Drake Relays with a personal best of 54 feet in the shot put his junior year, showing how he could use his body in multiple ways.

“Track and field is interesting because people approach it differently,” Sovers said. “Some people may approach it for other activities that might be down the line a little bit. Some do it to keep them in shape, but Tyler did it because he loved to compete. So, you always saw that every time he went out there and stepped into the ring that he just competed at the highest level possible and never backed down to anyone. That’s what I admired about him.”

Iowa head coach Kirk Ferentz admired Linderbaum in 2018 when he was a defensive lineman as a freshman.

But then Ferentz’s staff thought he had a chance of being a really good center for them toward the end of the 2018 season, which is why Linderbaum was the second-string center for the Outback Bowl that year.

Ferentz said his adeptness showed in the move, and in the end, it was a seamless transition that was kind of amazing in itself. If the Hawkeyes had five Linderbaums, they would all be starting.

“He’s just got a great attitude,” Ferentz said. “He loves football, he loves his teammates, and he works at it. He really studies things. He and Petras are in constant communication, so that’s a big thing too, that combo. He’s just a really good football player. And we have had a few of them come through here and he’s certainly in that category.”

Linderbaum already had experience on the other side of the ball prior to flipping to center. In high school, he was forced to play on both sides of the ball because he was too good of a player to stay off the field, plus Solon had a small roster.

Even before Iowa considered making him a center, someone familiar with the Hawkeyes saw some potential for Linderbaum to make big waves.

Former Iowa linebacker James Morris, also a Solon alum, helped the Solon offensive line one summer. During that time, he said if Linderbaum played center at Iowa, he’d be an All-Big Ten player.

Linderbaum’s leadership and communication skills are what Ferentz wants in a center in his system. Ferentz said he always thought that the center has the toughest job on the field because of their need of communication with the quarterback and then having to block. He also said there are certain blocks in Iowa’s offense that aren’t easy to execute.

“Centers are the MVPs,” Ferentz said. “Quarterbacks think they are big shots, but if they don’t get the ball, they are going nowhere. You can’t play a game without a center, so it’s just a really important position.”

Linderbaum is considered a top NFL draft prospect should he choose to leave after the season.

“We just take every day as it goes,” Todd Linderbaum, Tyler’s father, said. “We’re not really ahead looking at those things. Every day is a different day, you get up, you go to practice, you work hard. I think those NFL aspirations and things will take care of themselves if they do happen, you know what I mean. I’ll be honest, we really haven’t discussed it as a family.”

Linderbaum recently changed his degree from enterprise leadership to elementary education. His dad’s side of the family is full of teachers — Todd Linderbaum is a physical education and health teacher at Mark Twain Elementary School in Iowa City. Linderbaum also wants to get into high school coaching.

That’s in the future. Linderbaum is focused on the present and continuing to improve upon his already high level of play. And Iowa is focused on making the most out of its defensive lineman turned (potential) All-American center.

“On the offensive line everything is going to start at the center position,” offensive coordinator Brian Ferentz said. “The guy is going to be your tone setter, going to be your tempo setter, and he’s going to be your bell cow… He has all those measurables that you’re looking for, but the level he’s competing at, his desire to compete and to line up and beat the person across from him, it’s as high as I’ve been around.”

“If we can steal some more guys like that from the defense, we’d certainly love to do it. Guys like him are few and far between.” 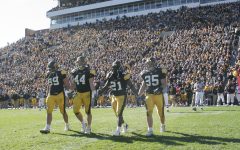 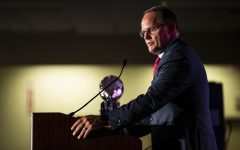 Around the Big Ten Week 7: Where to watch the Iowa-Illinois football game 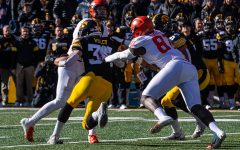