On the Line: Week 7 game picks

The DI football staffs picks the Iowa-Illinois game and other matchups ahead this weekend. 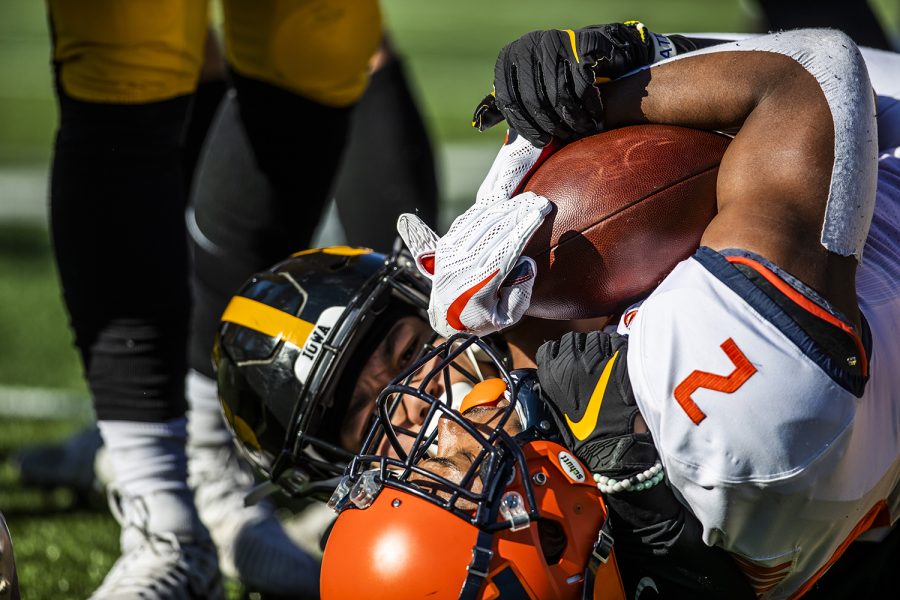 Illinois running back Reggie Corbin catches a pass during the football game against Illinois on Saturday, November 23, 2019. The Hawkeyes defeated the Fighting Illini 19-10. Corbin rushed 38 yards throughout the game.

Kade Overton, DITV Sports Director (15-14): Iowa — Is it too late to redo the first two games?

Jason Brummond, Publisher (21-8): Iowa —  All it takes to stop an offense is clapping. Who knew?

No. 12 Indiana vs. No. 16 Wisconsin
Read: Wisconsin — Really wish Penix Jr. was healthy.

Hanson: Wisconsin — No quarterback vs. nothing to play for.

Goffin: Wisconsin — The Badgers didn’t enjoy another week off.

Brummond: Wisconsin — Indiana is good, but not good enough without its starting QB.

Nebraska vs. Purdue
Read: Nebraska — Maybe Nebraska has a reason to clap this game.

Werner: Purdue — Gotta get those mustaches right before I can pick you.

Overton: Purdue — Purdue is going to do a lot of clapping.

Pinski: Purdue — Big Red has been pretty small this season.

Maryland vs. Michigan
Read: Maryland — I’ve picked Michigan too many times this season.

Goffin: Maryland — There’s a job for Jim Harbaugh in Detroit.

Overton: Michigan — Is Harbaugh coaching for his job? Win.

Bohnenkamp: Maryland — Claps will echo through the Big House.

Brummond: Maryland — Harbaugh increasing his odds of getting that promotion to the NFL.

Pinski: Michigan — Wolverines will have a shell of a time against Maryland.

No. 5 Texas A&M vs. Auburn
Read: Texas A&M — Didn’t work out very well for either of these teams against Alabama.

Goffin: Auburn — Ask me about the time I saw Auburn play.

Overton: Auburn — I just want a reason to cheer for Bo Nix.

Bohnenkamp: Texas A&M — Aggies may clap their way into the CFP.