Although Undergraduate Student Government has advocated for a pass/not pass option, the university plans to stick with standard grading. 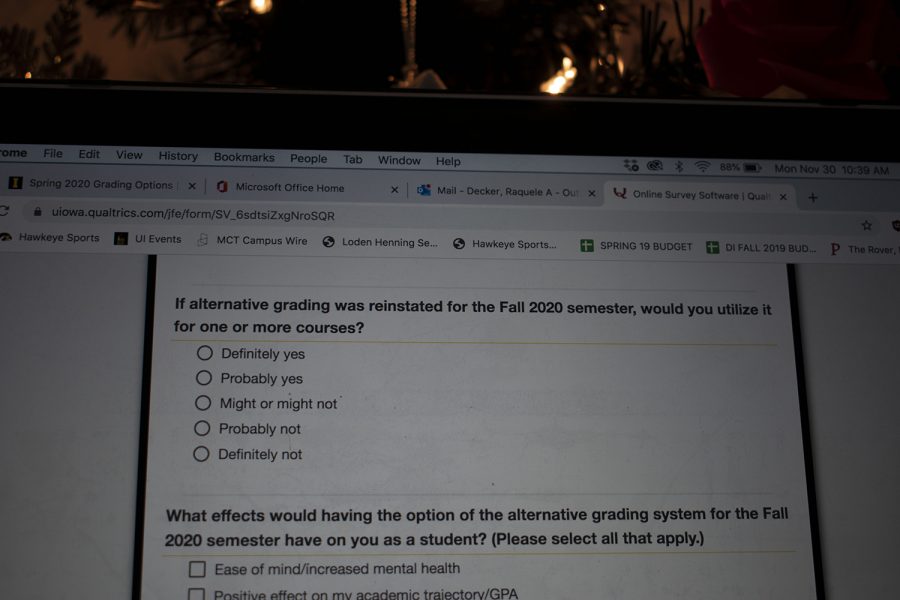 Members of the University of Iowa’s Undergraduate Student Government have been advocating for the university to implement a pass/fail grading option for the fall semester similar what the UI offered in the spring, but the university is not planning to offer alternative grading options this semester.

In a campus-wide email sent Wednesday, the UI reminded students that the university would not offer a pass/fail grading option during the fall semester similar to the spring when the UI closed residence halls and sent classes all online.

As previously reported by The Daily Iowan, during the 2020 spring semester, the UI offered students a pass/not pass grading option. If students opted in, they would receive a passing credit for the class instead of a letter grade if they passed, the criteria of which varies between colleges.

The UI did extend the deadline for class withdrawals and drops until Dec. 18 for the fall semester.

Director of Media Relations Anne Bassett wrote in an email to the DI that although the UI has reached a decision, they appreciate hearing from students.

Bassett wrote the UI will add a notation to transcripts explaining the impact of the pandemic on the semester.

“Over the course of the past weeks and months, we have heard directly from students about the overwhelming struggles and challenges they face this academic year,” USG President Connor Wooff wrote in an email to The Daily Iowan following the UI’s email. “An abnormal semester requires abnormal flexibility, and USG remains committed to working with administration in providing that support to students at every opportunity.”

USG’s Director of Academic Affairs Regan Smock and Wooff have been advocating for the university to implement a pass/fail grading option since June.

“I would consider it to be the most challenging semester college students have ever faced,” Wooff said. “It makes sense that if our classes are not being offered in the way that the university predicts, then our grading system should reflect that.”

Smock and Wooff compiled data from a USG survey about student’s opinions on the fall semester. In a report of the survey results Smock shared with the DI nearly a third of the undergraduate population completed the survey. Of the surveyed students, 82 percent responded they would “definitely or probably” use a pass/fail grading option if it were available.

“As long as this virus is wreaking havoc on people’s lives and the mental health of people from 18 to 24 is the lowest it has ever been, there has to be some grace in the grading system,” Smock said.

Students could submit personal testimonies in the survey describing how alternative grading would benefit them and how COVID-19 has impacted their lives during the fall semester.

Wooff said that although the data from the survey questions was telling, he found the personal testimony to be most heartbreaking.

“I have experienced family death as a result from COVID-19 and had to balance arranging a funeral while trying to stay on top of my courses,” a testimonial in the report reads. “I have experienced some of the worst feelings of anxiety, guilt, rage, and sadness this year. I only hope that the University of Iowa will recognize the hardship many students are facing behind closed doors.”