The sophomore made a crucial play against Nebraska on Friday when he recovered a fumble in the fourth quarter. 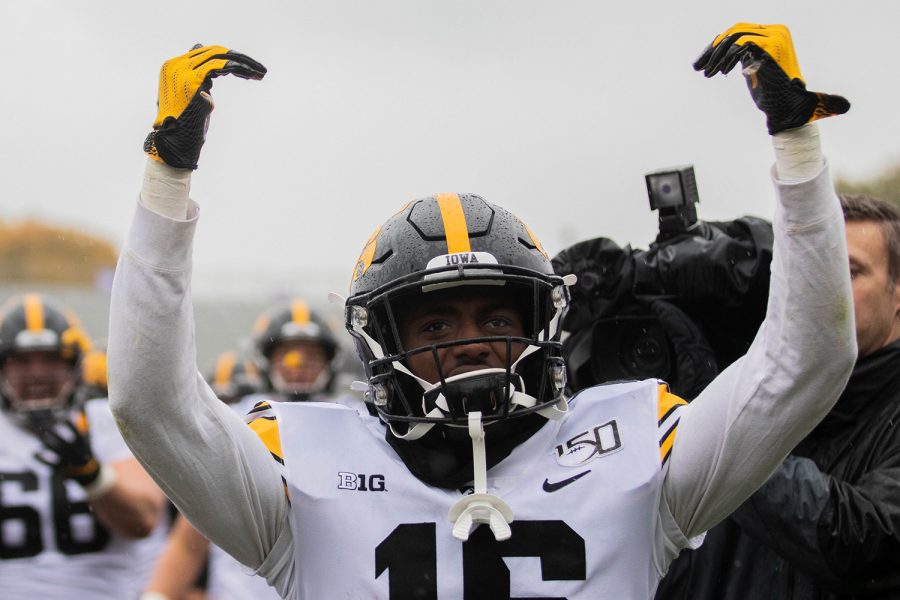 Iowa defensive back Terry Roberts celebrate the win after a game against Northwestern at Ryan Field on Saturday, October 26, 2019. The Hawkeyes defeated the Wildcats 20-0.

In the fourth quarter of the Iowa-Nebraska game, Iowa’s Terry Roberts was in the right place at the right time. But the special-team ace didn’t do that by accident.

After the Hawkeyes went three-and-out on offense, Tory Taylor punted the ball from his own 19-yard line. Unsurprisingly, the punt went 46 yards. But what was surprising was Nebraska’s Cam Taylor-Britt let the ball graze off his hands, causing a fumble.

The ball bounced multiple times, and as the ball moved about three yards toward the Nebraska end zone, Roberts – a gunner on the punt unit – came off his block and fell on the football. Keith Duncan would kick a field goal on the ensuing drive to extend Iowa’s lead to 26-20, which ended up being the final score of the Hawkeye victory.

“I told Tory before we went out there, ‘Get a good ball and we’ll go down there and cover,’” Roberts said postgame on Black Friday. “And I looked at the returner, I was seeing him, and I looked where the ball was, and he dropped the ball. See ball, get ball.”

Roberts said special-teams coordinator LeVar Woods told the punt unit earlier in the week that, at some point, Nebraska was going to fumble.

The Cornhuskers did just that, and the Hawkeyes cashed in on the blunder.

It wasn’t Roberts’ first time making a significant play on special teams in 2020. Against Northwestern, Taylor had a 50-yard punt early in the first quarter that was muffed by Kyric McGowan. As the ball slid behind McGowan and toward the sideline, Roberts dove and recovered the ball before it went out of bounds.

With the ball then inside the Northwestern 10-yard line, Spencer Petras completed a touchdown pass to Brandon Smith on the next play.

Roberts helped make one of the most memorable plays of the season in 2019. Against Iowa State, the Hawkeyes were up by one point and punted the ball with under two minutes to go in the fourth quarter.

As the punt came down, Roberts made contact with the player who tried to block him, and that Cyclone proceeded to run into his own man – the punt returner – as the ball went off his back. The ball was immediately recovered by the Hawkeyes for the Iowa victory.

“My job is to just go down, force a turnover on special teams,” Roberts said. “The faster you get down there, the harder it is for the punt returner to focus on the ball. He’s more worried about getting hit then focusing on the ball, so it’s kind of easy.”

RELATED: Rushing game picks up in second half of Hawkeye victory

Roberts is a sophomore defensive back, but he gets limited playing time on defense, so special teams is the one place where he knows he’ll have the opportunities to shine.

“Going back to pre-season, he was really humming on special teams,” Ferentz said. “You could tell it was important to him. He was committed to it. Boy, he plays with a lot of energy and toughness out there. It elevates the whole group. I think we all really appreciate what he’s doing. He takes a lot of pride in it.

“My prediction is at some point it’s going to show up with him being an every-down player as well. It’s all the same. Got to learn a little bit more about playing corner. It’s hard to give a player that kind of energy and determination. It’s been fun to watch him grow and develop.”