The Hawkeyes win their third game in a row and improve to 3-2 on the season. 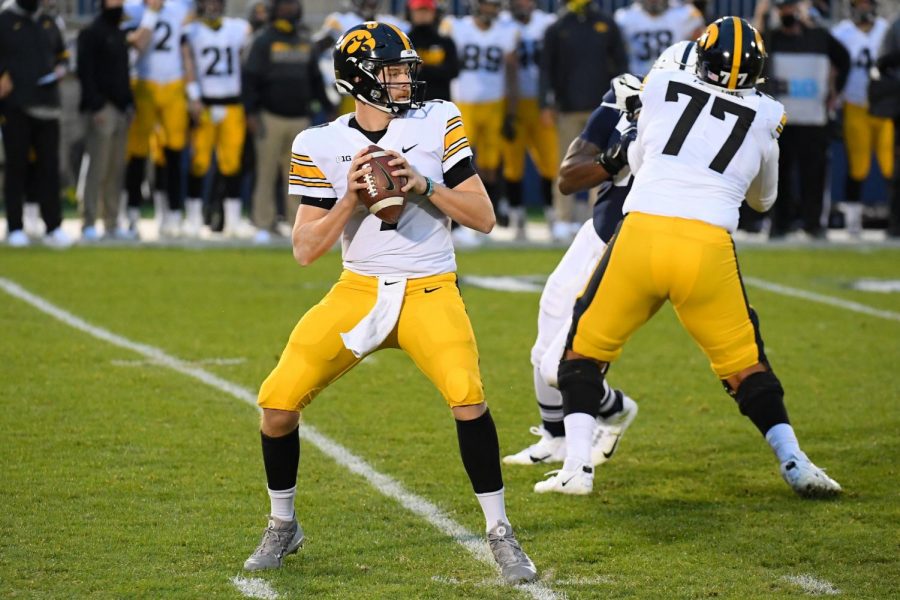 STATE COLLEGE, Pa. — The Iowa football team defeated Penn State 41-21 Saturday at Beaver Stadium to improve to 3-2 on the season. The victory is head coach Kirk Ferentz’s 100th against a Big Ten opponent.

Keith Duncan hit a 40-yard field goal on Iowa’s opening drive to put the Hawkeyes up early. Penn State scored a touchdown on its next drive, but then Iowa responded with one of its own. Hawkeye running back Tyler Goodson capped a 75-yard drive with a 10-yard rushing touchdown.

It was one of three scores on the ground for Iowa in the first half. Running back Mekhi Sargent scored two from one-yard out to put Iowa up 24-7 at halftime.

A three-yard quarterback sneak for a score by Spencer Petras with 6:45 remaining in the third quarter extended Iowa’s lead to 31-7. Penn State responded with a pair of Sean Clifford touchdowns. Clifford replaced starter Will Levis and threw two touchdowns on his first two passes of the game.

But it was too late for Penn State. Iowa tacked on a field goal halfway through the fourth quarter and defensive tackle Daviyon Nixon clinched a 41-21 Hawkeye victory with a 74-yard interception return for a score with only minutes left in the game.

Sargent ran for 101 yards and two touchdowns on the day. Goodson added 78 yards and a score on the ground as well.

Iowa’s next game is against Nebraska at Kinnick Stadium on Black Friday.