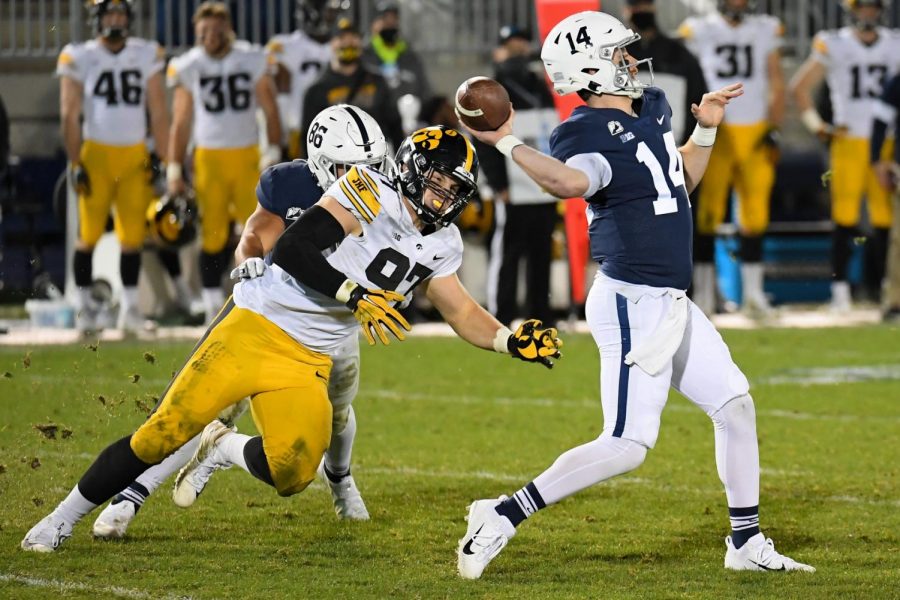 Daviyon Nixon has had a decorated football career, but there was one thing he had yet to accomplish on the gridiron: scoring a touchdown.

That changed in Iowa’s 41-21 victory over Penn State on Saturday.

With just over two minutes left in the fourth quarter, Nixon, a 6-foot-3, 305-pound defensive tackle, intercepted a pass by Penn State quarterback Sean Clifford just inside the Iowa 30-yard line and returned it 71 yards for the first touchdown of his football career.

Nixon went untouched and really only had one would-be tackler in his path: Clifford.

“It’s an amazing feeling,” Nixon said. “My first mindset was to run through the quarterback, but I saw that the right tackle was close enough to me so I’m like, ‘I gotta go score.’ If I get the ball in my hands, I want to put it in the end zone, so that’s what I did.”

At the Penn State 45-yard line, the Nittany Lions’ quarterback closed in on Nixon but the Detroit, Michigan, native juked Clifford out using a euro-step of sorts, something usually only reserved for the hardwood. Nixon sidestepped from his left to his right while switching the ball from his left hand to his right over Clifford’s head. Nixon then rumbled the rest of the way without anybody in his path.

Quarterback Spencer Petras had a view of the play from the sideline, and as Nixon neared the end zone, he couldn’t believe what he had just seen.

“At first I was yelling, ‘Get down, get down,’” Petras said. “And then I saw him running down the sideline, saw him euro-step or whatever it was. At that point my jaw dropped. I was in awe.”

Although Nixon’s pick six sealed the game for Iowa, he wasn’t the first Hawkeye defensive lineman to tally an interception on Saturday.

Earlier in the fourth quarter, Nixon got his hands on another Clifford pass. But this time, the tipped ball ended up in Chauncey Golston’s hands.

Golston’s interception came on the first Penn State possession after Clifford, who relieved starting quarterback Will Levis, had thrown two long touchdowns on his first two plays under center.

The interception stopped a second-half surge from Penn State that was all too familiar for the Hawkeyes, a team that held leads in both of their losses this season, only to have them erased.

“You started wondering, ‘OK, is this going to be one of those stories, right,’” Ferentz said. “Guy comes off the bench, a guy who’s won a lot of games and had a lot of success here. Is it going to be one of those things… But our guys kept playing and that’s what you gotta do. It doesn’t always go your way. That is football. The team has to respond, somebody’s gotta find a way to get something done, and our guys came up big.”

Iowa also totaled 10 tackles for loss and five sacks on the day. Saturday’s game illustrated growth for the defensive line since its play at the beginning of the season.

“We were less than impressive three weeks ago,” Ferentz said. “I’m pleased with the progress and I hope we’ve got a lot more left in us.”