Junior Center Monika Czinano is passing her knowledge down after learning from her own mentor, Megan Gustafson. 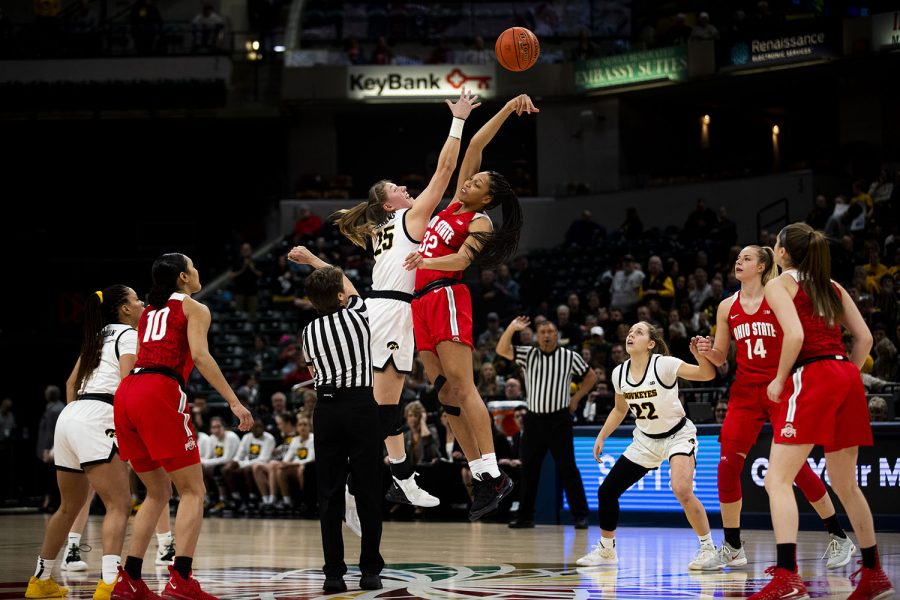 Monika Czinano spent her first season on the women’s basketball team learning the ropes from two-time Big Ten Player of the Year Megan Gustafson. This season, the junior center/forward is passing down her wisdom to freshman center Sharon Goodman.

At women’s basketball media days on Thursday, Czinano said it’s still an adjustment to think of herself as an upperclassman.

“Understanding that I’m a veteran now is kind of something that I’ve still had to wrap my head around,” Czinano said. “But it’s been a really eye-opening experience [to mentor Goodman], like I’ve never had to do it kind of vice versa with what Megan did for me. But I know during the summer when we were allowed to, we would come in and work out a whole bunch together, and I remember over quarantine we were shooting buddies… she’s been picking up on everything so beautifully and doing so well.”

Czinano also noted how exciting it was for her to see Goodman doing something well.

“I never really understood this when it was Megan doing it to me, but it’s nice, like you kind of just get a little ‘oh my gosh she’s doing so well’ in practice,” Czinano said.

In practice, Goodman said Czinano’s mentorship so far this season has been uplifting.

“Me and Monika, I feel like we already have a great relationship,” Goodman said. “There’s such a legacy here for post players, so her accepting me into that too has been really nice and encouraging.”

Czinano had a breakout sophomore season in 2019-20 with a 67.9 percent shooting percentage, earning her All-Big Ten honors and a preseason selection to the All-Big Ten First Team for the 2020-21 season.

Despite her shooting percentage leading the Big Ten and being second in the nation last season, Czinano said she is still working on it.

“I’m trying to improve it, honestly,” Czinano said. “Make it better than it was last year.”

Throughout her years in high school, Goodman said, she was never able to practice with someone her own size. This year, she said she’s excited to be practicing against Czinano.

“It’s a whole new experience for me to be competing against people my size every day in practice,” Goodman said. “But I’m just here to compete with her and push her to be better too.”

The team ran into problems last year when it did not have a solid backup for Czinano, who often ran into foul trouble. This year, if Czinano gets into foul trouble or needs a break, Goodman will be ready to step in.

“Definitely, staying out of foul trouble is something that is constantly a goal for me and it’s something that resets every game,” Czinano said. “But it’s huge having Sharon here, just in case – I mean, obviously there are going to be times [foul trouble] happens, there is for every basketball player, so having her to step in is going to be really great.”

A schedule for the 2020-21 women’s basketball season has not been released yet, but on Sept. 16 the NCAA approved a Nov. 25 start to the season.