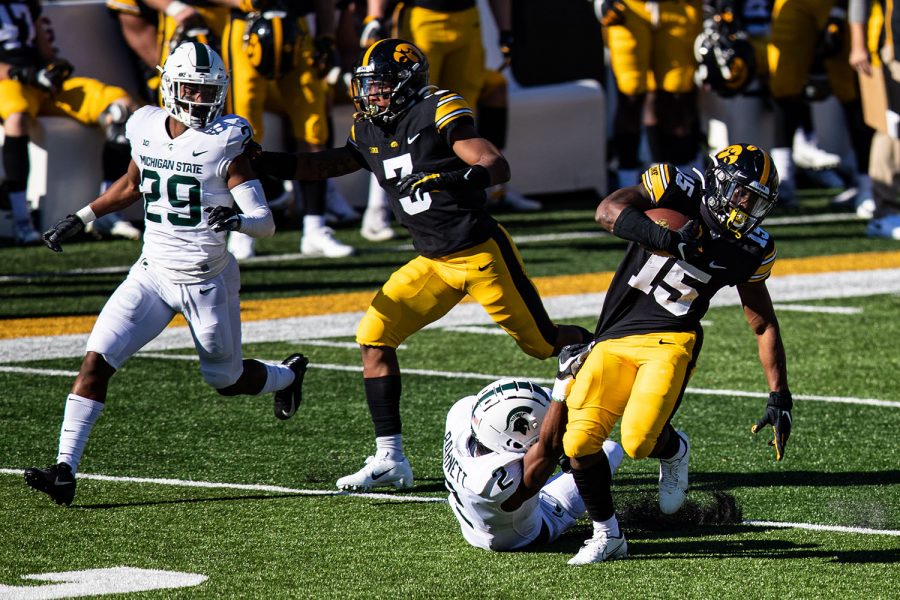 Iowa running back Tyler Goodson carries the ball during a football game between Iowa and Michigan State in Kinnick Stadium on Saturday, Nov. 7, 2020. The Hawkeyes dominated the Spartans, 49-7.

Tyler Goodson, a Suwanee, Georgia, native, is not a player the Hawkeyes are supposed to have on paper.

Named Georgia Player of the Year his senior year of high school, it would make perfect logical sense for him to be at an SEC school.

Instead, Goodson came up to the Big Ten and Iowa to become one of the best running backs in the conference. He has had an incredible impact in the Hawkeyes’ two victories this season, both of which came when the Hawkeyes made the running game the main part of their offense.

Against Michigan State, he had two touchdowns and 113 yards. Perhaps his most memorable play wasn’t a touchdown, as he ran 71-yards toward the beginning of the third quarter.

Goodson showed what he could do again at Minnesota. He rattled off 142 yards and scored another two touchdowns.

Even when the offense was inconsistent in the first two games, Goodson still made a positive impact. He ran for 77 yards and had 59 receiving yards at Purdue, and he did score a touchdown against Northwestern.

With his commanding performance in 2020, Goodson is the Hawkeyes’ mid-season MVP.