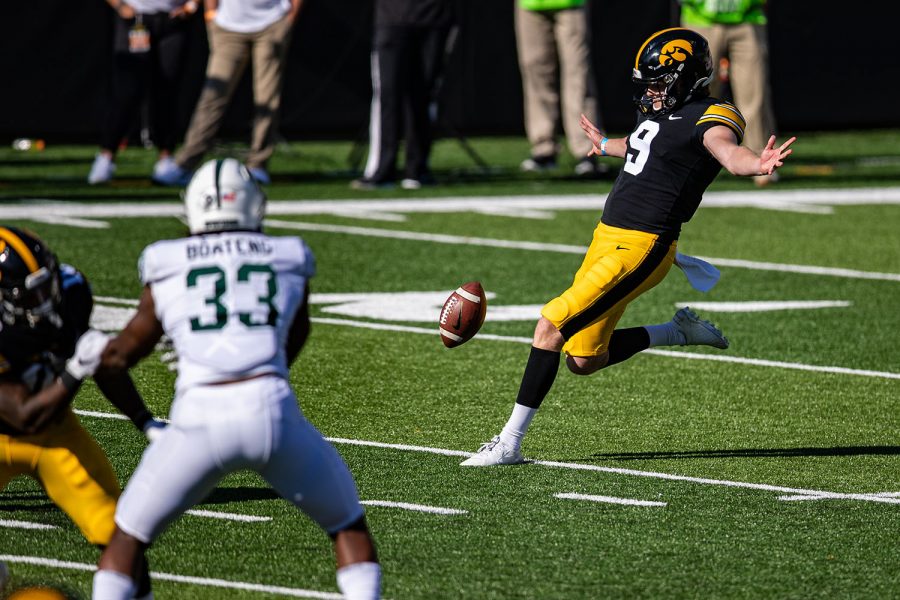 Iowa punter Tory Taylor kicks the ball during a football game between Iowa and Michigan State in Kinnick Stadium on Saturday, Nov. 7, 2020. The Hawkeyes dominated the Spartans, 49-7.

Through four games this season, Iowa’s most valuable player is its punter. Yes, you don’t need to read that sentence again.

Tory Taylor and his right leg have taken the Big Ten and the country by storm this season. The 23-year-old freshman from Melbourne, Australia, is leading all FBS schools in net punting average at 46.15 yards per punt. Taylor has also allowed the Hawkeye punt coverage to get down the field and make plays as Iowa has allowed all of negative eight punt return yards this season.

As for pure punting distance ­­– not taking into account the opponent’s return yards – Taylor is 13th in FBS at 45.80 yards a boot. He is the best freshman in the country in that stat.

Of his 20 punts on the year, Taylor has pinned Iowa’s opponents at or inside their own 20 yard-line 15 times, the 10 yard-line seven times, and the five yard-line three times.

Taylor has punted so well that only two of his kicks have been returned this season and he hasn’t kicked a touchback yet.

Whenever Iowa is in a fourth and medium or longer near midfield, Kirk Ferentz will call on Taylor to flip the field for his defense. So far, the Iowa punter has done that better than anyone in the U.S.

He also has a cool accent, so he’s got that going for him.