Opinion | What do we do with the right?

In the wake of Donald Trump’s loss in the election, we now have to deal with the vast number of radicalized people who followed him in this country. 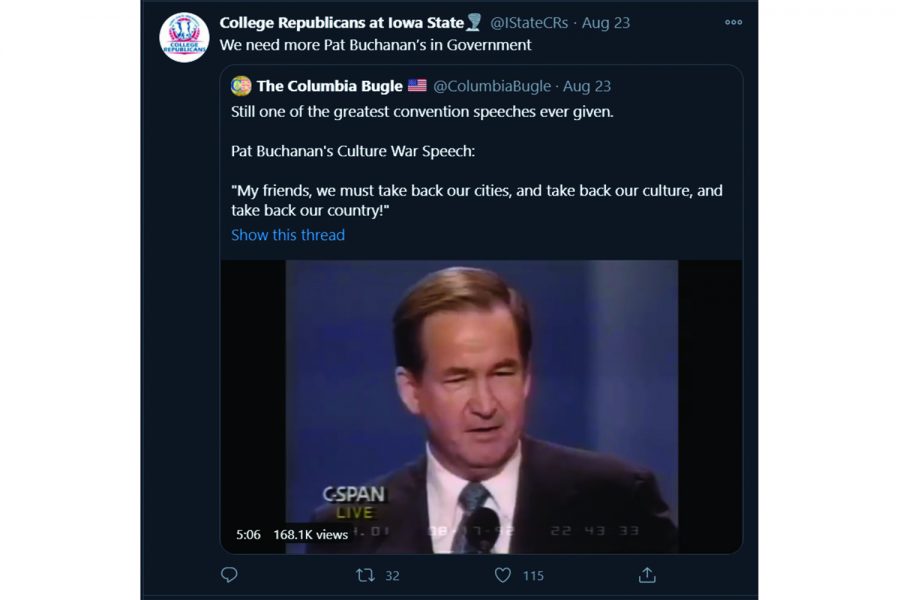 There’s not much to say to introduce this beyond, ‘hey, white nationalists are a problem in America.’ And they’re not just a mild, ‘ignore it for now and we’ll get to it later’ sort of problem. It’s something that needs to be dealt with now.

Currently, at the #MillionMAGAMarch, a massive number of white nationalists are making themselves distinctly present. We have video after video of speakers attacking the Jewish community, displaying swastikas, having prominent nazis such as Nick Fuentes give speeches, attacking protestors, etc.

These people exist, and they are dangerous. The rise of far-right terrorism is well-recorded and present. And it’s not some vague threat off on the coasts either.

The College Republicans at Iowa State are, without a doubt, a white nationalist group posing as mainstream Republicans.

A collection of tweets from their group was gathered, showing their disdain for anyone to the left of Pinochet.

They call themselves “traditional nationalist conservatives,” call trans people mentally ill that deserve to be locked in mental asylums, claim that the election was stolen, are “ready to fight” in a war with the White House, fans of Pat Buchanen (who we will return to), attack journalist institutions, want to free alleged killer Kyle Rittenhouse, and many other things.

But what really brought attention to them was their post calling for individuals to “arm up” as “the elites want revenge on us.”

The main conspiracy theory that the far-right peddles is that the government is run by a jewish cabal of globalist economists plotting to use capitalism to control white people and breed them out of existence via miscegenation.

But you can’t outright say that — because beyond being incredibly stupid — it’s an optics nightmare. But they slip up.

Remember Pat Buchanan? He was one of the originators of the white replacement/immigration invasion theory — the one the Southern Poverty Law Center says is a centerpoint of far-right, white supremacist belief. Not only do the College Republicans at Iowa State like him — so does Nick Fuentes! The man who rails against globalists and Jews and transgenderism and whatever else he thinks is disgusting. 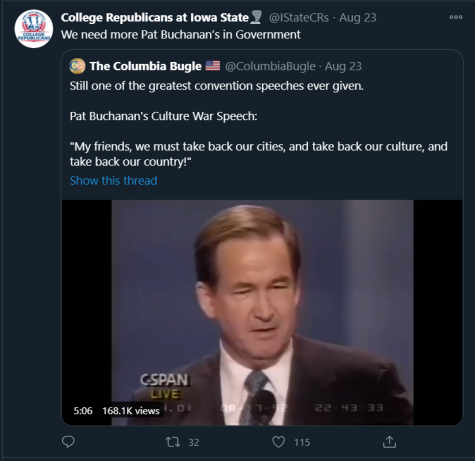 And you’ll never guess who invited Nick Fuentes to speak at their college! That’s right, the CRIS! While they claim to disavow Fuentes and state they never invited him, Fuentes is adamant in that they’re simply playing to optics.

When your group’s twitter feed is full of anti-immigration, anti-LGBTQ, anti-progressive, and every other belief that falls in line with modern Nazi ideology, the disavowal falls flat. 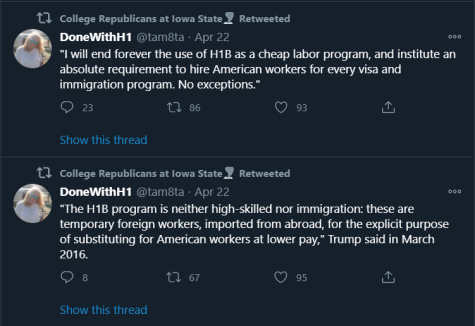 And it’s not just those of us on the left who think this either.

“You can’t shine enough light on them for as dangerous as that mentality is,” said Andy Nilsson, convener of the National Republicans, a NeverTrump group dedicated to maintaining the Reagan-Bush legacy of the Republicans.

I spoke with Nilsson for some time about the state of the Republican party and what his group has noticed about what’s been going on in the right.

“I mean, as a percentage, 20% of the republican [college club] chapters around the country fall in that category of what we would describe as an extremist fringe,” said Nilsson.

These types of people don’t just have “alternative beliefs.” They’re not quirky political ideals — they are genocidal idealists who want people who aren’t like them to drop dead.

And while the Iowa Federation of College Republicans deserve to be applauded for defederating the Iowa State chapter due to their abhorrent behavior, Iowa State has decided to not pursue any form of punishment toward the club.

This kind of rhetoric makes the Dylan Roofs of the world — everything is just words and insults until someone decides to take it a step further and ‘do something’ about the ‘mass-immigration’ and ‘mentally ill transexuals’ in America.

If we are to stop the spread of white nationalism, then we need to look at the roots of where it grows and address it. And right now, one of those roots is clubs like the College Republicans at Iowa State.