The boxes will buffer bicyclists from traffic and allow for easier lane positioning to prevent conflicts between bikers and motorists. 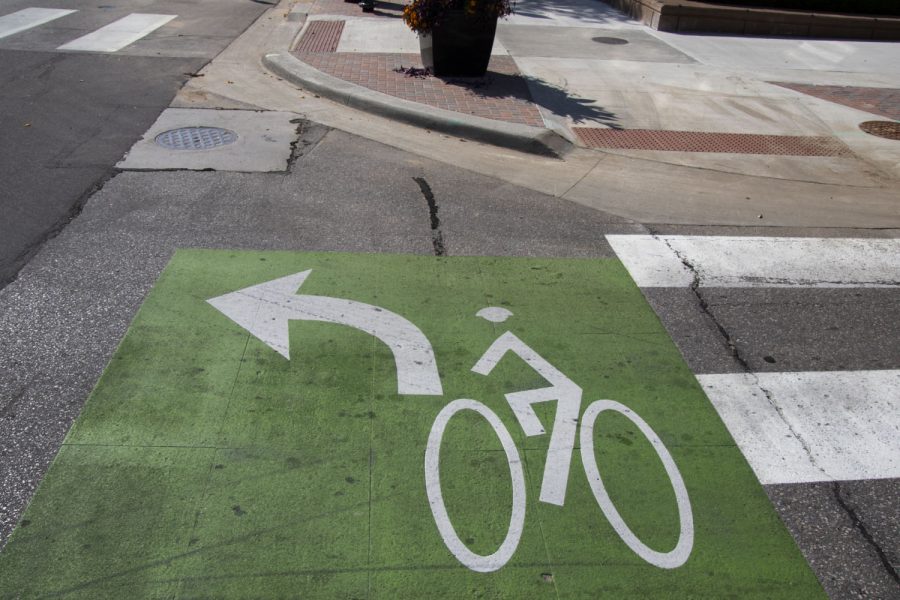 Left turn squares for bicycles are seen on Sunday, Oct. 11, 2020 in Cedar Rapids.

The bike turn boxes, painted on Jefferson and Market Streets last week, are designed to prevent conflicts between motorists and bicycles at busy intersections.

“Let’s say you want to go left on Madison and you’re not comfortable riding in traffic,” Assistant Transportation Planner Sarah Walz said. “What you would do is just continue through the light. And then there’s a green box where you can stop and wait… but you’re protected by the curb. Then you would just wait for the light to go green on Madison, and then you’re out ahead of traffic and you can cross the street and get into [a bike lane].”

Iowa City adopted the Bicycle Master Plan in 2017, which is a document that guides city planners in fostering safe and equitable infrastructure for cyclists.

“Riding on the sidewalk makes bicyclists more prone to crashes with vehicles at conflict points like intersections and driveways because motorists are often not looking for or expecting to come across a bicyclist on the sidewalk,” Hamann said. “Bike lanes and bike boxes help keep cyclists safe on the road because they give the rider designated space.”

Avid Iowa City cyclists Michael Chamberlain and Asa Crowe expressed skepticism in the effectiveness of these painted-on infrastructure improvements without other education efforts.

“I don’t think the bike lanes or boxes alone will necessarily make it safer for cyclists because they add more to perceived safety while actually giving cyclists less room for error,” Crowe said.

Crowe, who works at local bike shop The Broken Spoke, added they grew up biking in rural Iowa on two-lane highways and gravel roads and shoulders — a much more dangerous setting compared to Iowa City’s roads.

Chamberlain, Broken Spoke owner, said he has a love-hate relationship with bike lanes.

He said bikers can easily maintain the posted speed limit of 25 mph going down the hill, but that a bike lane actually forces bikers into a narrower space that features two curves and is commonly obscured with debris.

Both Chamberlain and Crowe said they agree the city needs to increase education for motorists to ensure safety for everyone.

“The more education for motorists to understand that the right to use the road belongs to the individual and not the vehicle is paramount,” Chamberlain said.

Crowe said bikes may use full lane signs like on Mormon Trek, which he said is better.

One of the six overarching goals of the Bicycle Master Plan includes providing educational opportunities for both motorists and bicyclists.

Harmann said continuing to implement the plan, including increasing education, will have impacts beyond just roadway safety.

“I think it is also important to continue to educate drivers on how to adapt to the new infrastructure changes and just get more people on bikes — which has benefits beyond safety, including benefits to our environment and health,” Harmann said.

Walz acknowledged the need for more education, and said the city is working with many local organizations, including the bike library, local schools, and various bike clubs, to teach both bicyclists and motorists how to share the road.

“Transit drivers are now trained in understanding bicyclists and how to share the road with them,” Walz said. “And we’ll be doing some more education with that with the Johnson County seats program and then we’re hoping to take that out more broadly.”

Morgan Ungs contributed to this article.