Walter Wallace’s death shouldn’t be turned into a partisan issue — everyone should be in favor of reforming mental health responses from police. 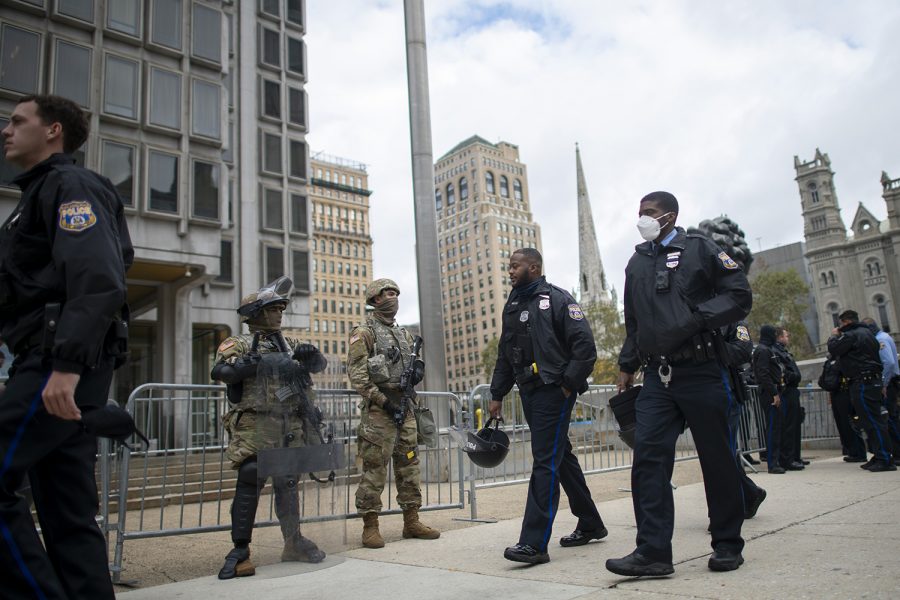 Police officers walk past as National Guard members monitor activity surrounding Philadelphia City Hall on October 30, 2020 in Philadelphia, Pennsylvania. In response to widespread unrest in the aftermath of Walter Wallace Jr.'s death, the National Guard arrived this afternoon to various locations throughout the city. The 27-year-old Walter Wallace Jr, a father of nine children, who Philadelphia police officers claimed was armed with a knife, was fatally shot by at least 14 total rounds.

The oversight of mental health is, once again, leading to the politicization of an issue that should not be politicized.

Walter Wallace, an African American with bipolar disorder, was shot by a police officer after pointing a knife in the middle of a mental-health crisis. Police asked Wallace to put the knife down before pulling the trigger.

Police officers have the right to defend themselves and others. It is likely how their department taught them to respond to these situations. Law enforcement shouldn’t be demonized for handling impossible situations, such as this one, according to their training.

However, any loss of life is tragic. My heart breaks for both Wallace and his family. The lives of people of color and those with mental-health issues matter. The police officer had options to respond in a way which would not have resulted in Wallace’s death while also keeping everyone safe — such as a taser.

The department, specifically where the officer was from, needs reform. Police Commissioner Danielle Outlaw of the officer’s department said her department lacks a mental-health unit and coordination of police calls with specialists.

Mental-health units and psychologists who could join officers when someone with a mental illness is committing a crime could give law enforcement better solutions for these situations.

There are also other solutions in the wake of reform discussions. Iowa City is currently considering a proposal to give cards to people with disabilities to help identify themselves to police.

Making it so people with mental illness receive treatment before hurting anybody, while easier said than done, is both a logical and emphatic solution. It is also, unfortunately, not happening right now. The National Institute of Mental Health estimates 40 percent of people with schizophrenia and 51 percent with bipolar disorder do not receive treatment in a one-year period.

According to a study by Mental Health America, the percentage of uninsured adults with mental illness is the highest it has been since the Affordable Care Act. More people with mental illnesses would be able to afford help if this issue gets solved.

In 2019, 73.7 percent of uninsured Americans said this was due to the cost. If the cost of healthcare decreased, more people who need it, including those with psychiatric illnesses, would be able to afford it. Funding for mental-health treatment and research has been declining for years.

Increased funding would improve and increase access to treatment. If there were annual mental-health screenings, more people who need it would find out they need services.  Both would help people who need it receive services before the need for law enforcement to get involved occurs.

Another solution is to make sure people who are at risk for mental illness get screened and services, if needed. Primary care doctors can flag patients who need further evaluation by mental health care providers. Collaborative care demonstrates better mental-health outcomes than standard management.

It’s not right Wallace got to the point of pointing knives at others before receiving help. It’s not right the officer had to choose between his and Wallace’s life. Let’s benefit both groups by fixing the American mental health care system.