Collaborating with the City of Iowa City, the Iowa City Downtown District has released a $25,000 grant program available to eligible downtown restaurants and businesses looking to upgrade their patio and outdoor dining spaces. 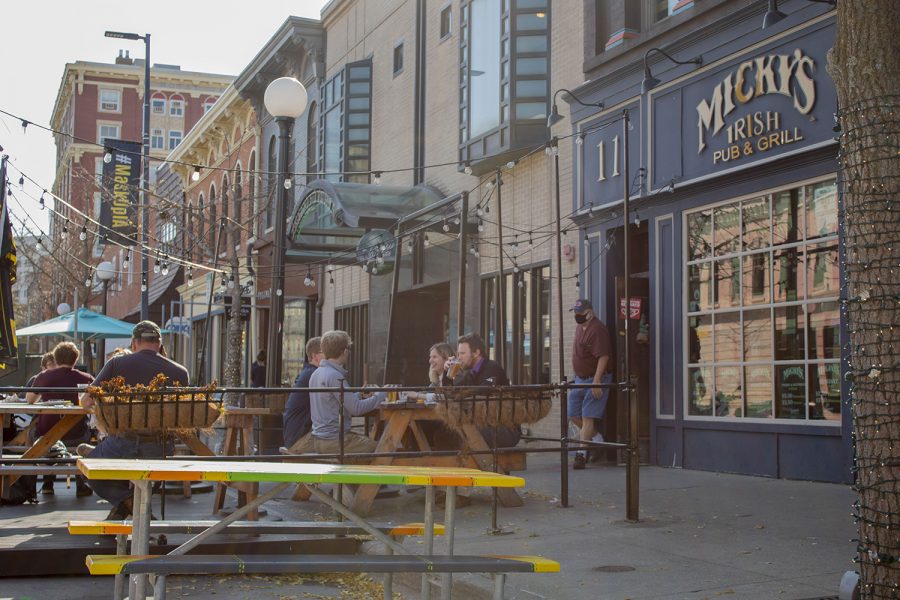 Micky’s Irish Pub in Iowa City is seen on Nov. 5, 2020. ICCD has created a winterization program to award restaurants with grant money to purchase patio equipment including heaters, extra lighting, and wind blocking tents. This equipment will allow restaurants to be equipped for a larger amount of people as winter temperatures approach, while still practicing COVID-19 social distancing guidelines.

With temperatures beginning to fluctuate and early signs of winter becoming present, the Iowa City Downtown District has partnered with the City of Iowa City to introduce a grant program and patio winterization guide for downtown district member restaurants and businesses looking to better equip their patio spaces for winter weather.

“We’ve always had in our strategic plan goals of making sure that downtown city is a four-season center so that there’s always something happening in the winter,” Bird said. “We want to strike that over time. We’re trying to support continued social distancing and healthy environments for those who want to continue to come downtown and for the restaurants this year. It’s becoming increasingly hard to do that and we want to make sure that we can help them.”

Bird said restaurants looking to apply for this grant must first propose their renovation plans to the City of Iowa City, and if those plans are approved, they are able to apply for the grant and access the financial and community resources associated with it.

Bird said the grant program is made up of a pool of $25,000, with each business receiving a maximum of $1,750. Bird said this funding is entirely from the downtown district– they had hoped to receive additional funding, but Bird said that didn’t come to fruition – so they decided to use their own funding instead.

Applications for the grant will be accepted until Nov. 30, unless all of the money has been awarded by that date — a likely scenario Bird said.

Bird said she thinks restaurants will see continued patio usage and customer flow if they are able to implement additional elements to their spaces that provide comfort in the cooler temperatures.

“The intent is really to encourage people to continue to come down and utilize either,” Bird said. “The picnic tables that are out there, they want to sit down and eat out, or to go to the patios as a source of as a place to pick up or sit down and eat your meal.”

Bird said the grant program provides downtown restaurants with an opportunity to prevent a sharp decrease in revenue over the winter months.

“It’s another tool for restaurants to help them remain open,” Bird said. “It can support sales over the course of a month or two and recognizing that the sooner you get something up and established, you can continue sales.”

Bird said the downtown district would like to follow along with restaurants that apply for and receive the grant, as this program is a pilot of sorts for future years and extending the patio season, and they would like feedback on how to improve this initiative as well as plans for recovery in 2021.

City of Iowa City Fire Marshal Brian Greer has been involved in the program, as he said he has been providing safety guidelines to restaurants looking to implement additional heating devices or architectural structures.

Greer said he is primarily working as a liaison between the restaurants and the City of Iowa City, as he will receive restaurants’ renovation plan submissions and coordinate with them regarding building materials and the feasibility of their plan.

“I’ll get [their proposed renovation drawings] sent around to whoever I need on our site to come up with an answer whether ‘yes, this will work or no, we can’t use those materials in this instance, but, you know, here’s some other stuff you can use,’” Greer said.

Mammita’s Coffee Shop owner Jacqueline Milian recently applied for and was awarded funding from the grant program. Milian said Bird approached her and recommended that she apply for the grant program as she had heard Milian was looking to renovate the patio space at her shop.

“So, she had heard that I was trying to make the patio last longer obviously for the weather that we have here in Iowa,” Milian said. “We just did a lot of work ourselves, which I think she really liked, and a lot of people liked that as well.”

Milian said with the grant money, she’s added additional furniture, an outdoor television, large heaters, fire pits, awnings to help block wind, as well as different elements of decor to attract customers to the space. On the first football game of the season, she opened the airy back porch for game-watchers.

“We’re very happy with the space and I’m very, very grateful to downtown Iowa City and Nancy for coming to check it out, she had heard that we were doing this and she was like, ‘this is awesome,’ and we applied for the loan and we got it so I’m so, so happy,” Milian said.

Milian said she is hopeful that with this grant money and the opportunity to upgrade their patio space, Mammita’s will gain back customers and revenue that were lost in the past year due to COVID-19.

“Before COVID, everybody was just sitting here and it was super, super busy,” Milian said. “Everybody always told me what a great vibe this place was, and that’s what my hope is, to gain kind of back what I lost with COVID and be able to give it to the people of Iowa City on the outside, not just on the inside.”