After a few years of discussing the project, the University of Iowa’s Undergraduate Student Government implemented the Green Bandana Project this fall to teach students about suicide prevention. 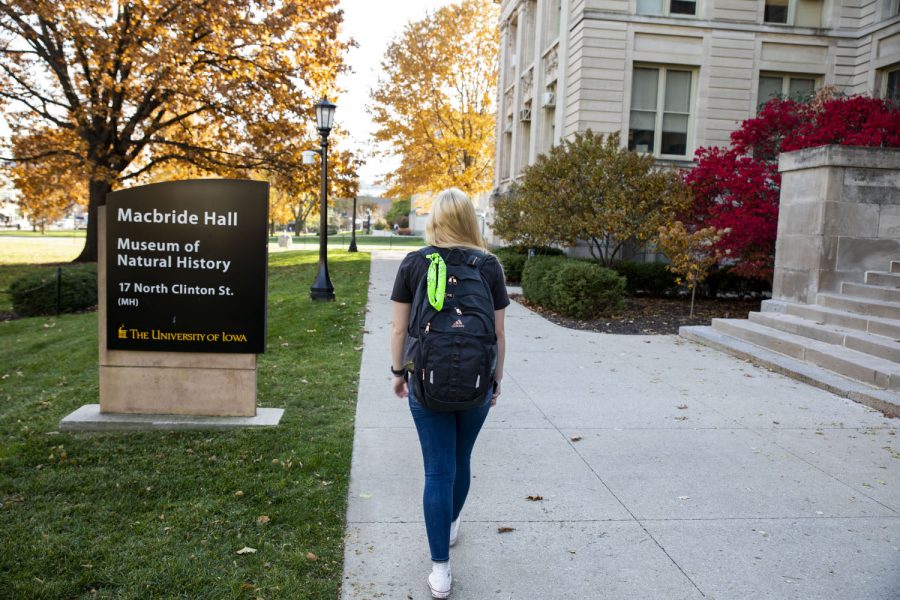 The University of Iowa Undergraduate Student Government implemented the Green Bandana Project earlier this month to ensure students understand campus resources and to help with mental health and suicide-prevention awareness.

The Green Bandana Project originated at the University of Wisconsin-Madison in 2016. The project has been considered at the UI for the past few years, said USG Health and Safety Committee Chair Verona Victoria, who began her position in spring 2020.

Victoria said USG knew this project needed to come out in 2020 because of the impact of the COVID-19 pandemic on individuals’ mental health.

“We just happen to be in a global pandemic right now where a lot of students and people in general are feeling more isolated, less connected with their peers and family members,” she said. “People are feeling more depressed in terms of functioning academically and socially. Those are now risk factors rather than protective factors since students cannot connect the same way.”

The Green Bandana Project at the UI requires students to complete the Kognito program, an interactive suicide-prevention program, and sign a pledge to support and empower those struggling with mental illness. First and second-year students, Victoria said, have already taken the Kognito training through Success at Iowa, a class required for first-year students.

USG consulted with the University Counseling Service to make this project possible, said Barry Schreier, the director of UCS. He said this project needs to be on campus to ensure students have an outlet for help if they need one, regardless of COVID-19.

The UI and USG are not the only schools or organizations in the area that are focusing on suicide prevention through the Green Bandana Project, said Jennifer MacCormick, coordinator of the Foundation 2 Crisis Center in Cedar Rapids.

Foundation 2 helps several high schools in eastern Iowa facilitate a Green Bandana Project and has for three years, MacCormick said. She said the project is critical in both high school and college to ensure students know how to help one another.

“College is one of the hardest transitions people go through in life,” she said. “We get a lot of calls with people struggling, especially freshmen and sophomores. That extra support and knowing what to look for and knowing what to do, it’s crucial. I don’t care how old you are, I think we need to teach everyone about what to do with such sensitive information.”

MacCormick said that understanding mental illness and suicide prevention are life skills that everyone needs, and she was glad the UI has instigated the project this fall.

This fall, however, is particularly difficult for the project, because USG has had to move the program online — something the project wasn’t made for, Victoria said. The main way to bring awareness to the project, Victoria said, has been through social-media promotion and a mass email to students, which isn’t optimal.

“I find it to be a little disappointing that that’s the primary way we’re able to spread the message because, realistically, if I didn’t know about the project, I would scroll right past it,” she said. “I’d rather be talking to students on T. Anne Cleary and engage with them on an individual basis, rather than just sharing the information online.”

Even though it is taking a different form than originally anticipated, Victoria said she knows this program is important and will have an impact on students.

Schreier said he is glad the UI will now have this program, regardless of its format. He said he has looked at programs at Ohio State University and the University of Wisconsin-Madison to ensure the UI’s will be as successful as theirs.

Schreier said he is ready to get this project off the ground to help students continue to be aware of how they can help their peers.

“This project is from the student community, for the student community,” he said. “… We all have a hand in suicide prevention. The Green Bandana Project helps you train yourself to know what to look for and the protective factors. You educating yourself to have a hand in the culture of suicide prevention on campus simply makes the culture stronger.”