A high-stakes election for University of Iowa students

Students are grappling with the realities of how a contentious election mirrors society's perception of their identities. 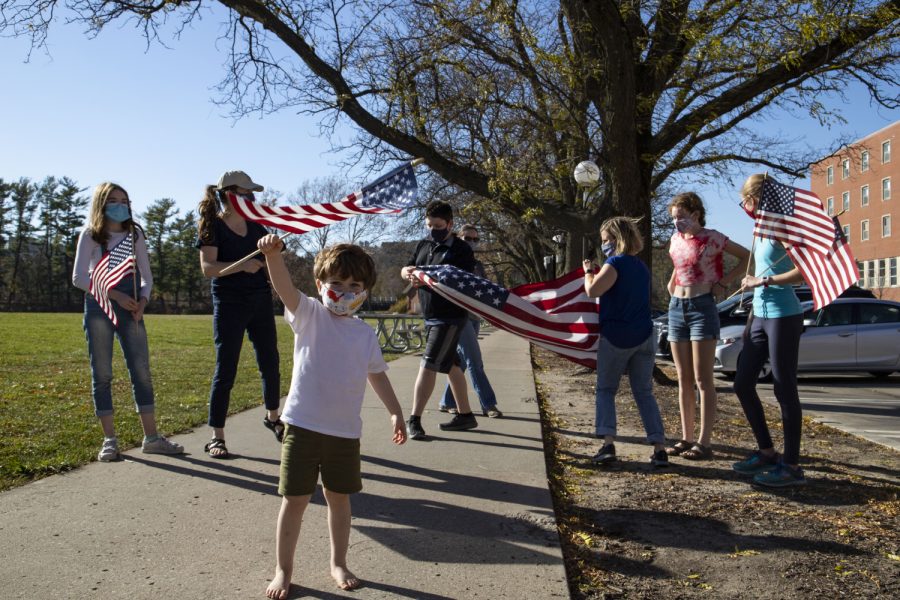 William waves an American flag as members of an impromptu celebratory car parade gather for a portrait outside of the IMU on Saturday, Nov. 11, 2020. After hearing the announcement that Joe Biden won the presidential election on CNN, Iowa City resident Nora Boerner and a group of friends decided to stop by a hardware store to pick up flags and drive them around downtown Iowa City. “Someone yelled, ‘What’s the point?’ and I said celebrating!” Boerner said. In addition to celebrating, Boerner said the group’s intention was to reclaim the American flag. “I haven’t felt like flying it for a while,” she said. The Associated Press declared Former Vice President Joe Biden the winner of the 2020 election after calling a Democratic victory in Pennsylvania at 10:25 a.m. CST.

For many University of Iowa students, the 2020 presidential election and president-elect Joe Biden’s victory was personal. Battle lines were drawn, sides were taken, and a record number of people voted for a candidate in an election cycle that has been brewing since 2016.

This year, the post-election scene looked dramatically different in Iowa City, frequently recognized as the state’s liberal bubble. In 2016 after Donald Trump was announced the 45th U.S. president, protests shut down Interstate 80 and international students contacted campus resources asking about the effect of the results on their legal immigration status and personal safety. This year, on the morning of Nov. 7, just before the Joe Biden-Kamala Harris ticket clinched 270 electoral votes, about 20 people attended an Iowa City Catholic Worker House-lead prayer vigil for a peaceful transition of power. That afternoon, honking horns mingled with cheers of “Go Hawks”  in downtown Iowa City where Democrats outnumber Republicans two-to-one.   The following afternoon, about 50 community members participated in a ‘Riding with Biden,’ celebration organized by Johnson County elected officials.

Across the nation, Democrats celebrated the win on social media as well as attending in-person gatherings, both organized and impromptu.

And for some students, the win was personal sigh of relief.

Some students worried that four more years of Trump would restrict their abilities to exist freely in the U.S. Although Biden was not seen as the progressive savior many liberal Iowa Democratic caucusgoers had hoped for, some student Democrats said his policy views and rhetoric toward marginalized communities proved more promising than the alternative.

“I think it’s been interesting that there has been this mood shift not really of negative or positive but just overwhelming uncertainty,” UI Undergraduate Student Government LGBT+  Constituency Senator Joseph Haggerty said. “Everybody is constantly thinking of something else at all times. And even if it isn’t something that is causing you a lot of anxiety, you know that for other people in class it’s going to lead to some change.”

This election — at the forefront of a pandemic that has continued to seep into every facet of campus life — was unlike any other. Associate Professor in the UI Higher Education and Student Affairs Program Cassie Barnhardt said the traditional elements of elections on campus have been muted because of the pandemic, but still exist.

Bardnhardt said it’s hard to disaggregate the campus mood down to one thing. With so many overlapping and intersecting influences, the election adds to a host of other stressors, she said.

This is part of the reason why University Counseling Services and other programs created support systems for students grappling with stress and anxiety. The UI multicultural centers partnered with UCS to implement spaces to help students process post-election realities.

In the four years since Trump was elected, the president has enforced a child-separation policy, proposed tighter rules restricting the mobility of international students including a summer proposal to end international student visas if classes were all online, and this fall appointed a controversial Supreme Court justice who referred to sexual orientation as a preference.

The White House has also moved to limit diversity, equity, and inclusion efforts across institutions. Trump himself refused to denounce white supremacy in an October presidential debate.

The level of bliss felt amid Biden’s win however, was not universal. As allegations over a rigged election circulate throughout Trump and Republican rhetoric, the Iowa State College Republicans encouraged people to “arm up” after results were announced.

Haggerty said being in so many queer spaces around campus has been reassuring, but the reality of so many people voting for a party that is so vehemently opposed to LGBTQ+ reform has changed the way he sees politics in the U.S.

Haggerty said one good thing he thinks came from the election and social media, however, is people’s political awareness. He called engaging with and sharing social media posts  that encourage people to avoid talking about politics as a way to prevent fractured personal relationships an oppressive behavior.

“If you make it so that it’s taboo to talk about, or you don’t want to talk about things because it will upset people in the natural order of things, that definitely comes from a place of privilege,” Haggerty said. “But just the very idea of not wanting to talk about politics, because it could obscure the system, proves that the systems are trying to hurt people––oppressed populations .”

Barnhardt said college campuses are typically places of contention when election season arrives, and these conversations are crucial to a student’s education.

“Students come to college, in part, to develop their minds, but to develop their civic consciousness and to connect what they’re learning with how they want the world to be,” Barnhardt said. “Being in the moment, and engaging in sort of intellectual discourse, or personal conversations and meaningful dialogues with people who are different from them, that’s going to create some tension.”

UI senior Dulce Escorcia, an organizer for Iowa Student Action, said it is easy to overlook who someone else voted for when you are not scared of your neighbors and don’t have to worry about whether they are racist.

Escorcia said regardless of identity, the stakes were high, especially for young people, people of color, and those who identify as queer.

“I feel like, for me, it’s not so much like a fight and win necessarily, but a win for, for all the young people, the young organizers, for people of color that put in so much work to push for him (Biden),” Escoria said. “Because the alternative was just that scary and that life threatening.”

UI second-year student Myles Evangelista said they were woken up by receiving the news of Biden winning the election this morning, which they said was rather exciting.

“I was on a call with my girlfriend and she got a text from one of her friends and immediately relayed the news to me, and I was about to fall back asleep but that woke me up right away,” Evangelista said.

Evangelista said they voted for the first time this election, causing them to be more politically involved than in previous years as well as invested in the election outcome.

“I’m a first-time voter so this is probably the most involved with politics I’ve ever been,” Evangelista said. “I’ve had to make some tough calls with people I was once friends with and have some disagreements and all that, but this is probably the most involved I have been. I don’t know – it’s all very new, but very rewarding to see everything play out.”

Evangelista said the election results didn’t surprise them as Biden steadily pulled ahead in the final days after Nov. 3, but they were relieved to finally have a confirmed winner as election “night” dragged on for days.

“I was just nice to finally get the confirmation after like days,” Evangelista said. “I was thrilled with the results.”

For Royceann Porter, the first Black woman elected to the Johnson County Board of Supervisors, the election win was a relief, and a show that a woman of color could break the vice presidential glass ceiling. She organized a cookout at Mercer Park, where about 50 people attended.

“After that wonderful win yesterday, it was a big relief and I needed to do something to celebrate,” said Porter, who is a Democrat. “So, this is the way, what I knew to bring people together.”

UI junior Nicolett Fodor, who is a member of the UI College Republicans, previously told The Daily Iowan that the group is proud of the GOP candidates who were elected or reelected Tuesday night.

Fodor is also the president of Hawkeyes for Joni, a student organization at the UI dedicated to reelecting Republican Sen. Joni Ernst.

“UIowa College Republicans and Hawks for Joni put in a lot of effort to support our candidates and get them re-elected,” she said. “We are incredibly proud of Joni Ernst, Ashley Hinson, Mariannette Miller-Meeks, and Donald Trump for winning Iowa.”