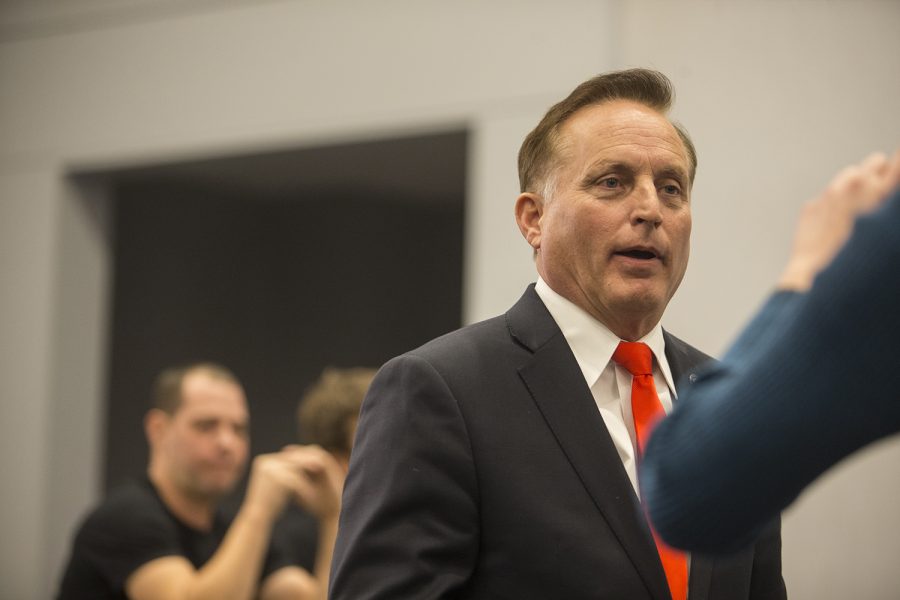 Secretary of State Paul Pate addresses members of the media at the Kim Reynolds watch party at the Hilton in Des Moines on Tuesday Nov. 6, 2018.

After Jasper County corrected a human error in election reporting, Democratic Candidate Rita Hart is ahead in the race for Iowa’s 2nd Congressional District. Hart’s Republican opponent Mariannette Miller-Meeks was ahead by just 282 votes shortly after midnight on election night. Now that the numbers have been updated on the Secretary of State’s website, Hart leads with an even narrower margin of 162 votes.

Iowa’s Secretary of State Paul Pate called for a hand audit of unofficial election results in the Clear Creek-Poweshiek precinct, after the Jasper County Auditor’s office detected a discrepancy in their election results on Nov. 5, around 4:30 p.m. There will also be a county-wide recount in Jasper to verify that the updated numbers are correct.

As previously reported by The Daily Iowan, there were still thousands of outstanding absentee ballots in Iowa’s 2nd Congressional District on Wednesday morning, which also have the potential to change who wins this seat. Ballots postmarked Nov. 2 have until Nov. 9 to arrive at County auditors’ offices.

In Jasper County, the number of votes for Miller-Meeks dropped by 373.

Miller-Meeks’ campaign shared a statement in response to the news from Jasper County saying the campaign doesn’t think there has been enough transparency in resolving the vote discrepancy.

“We do not agree with the Jasper County Auditor and the Secretary of State’s Office that there has been sufficient transparency concerning the machine irregularities and the auditor’s own claims that human error in the tabulation process arose after results were reported,” the statement read.

Jasper County Auditor Dennis Parrott told reporters the numbers did not change because of technical issues, but rather human error when entering numbers.

RELATED: Iowa’s 2nd District race is uncalled and separated by less than 300 votes, what happens next?

“We have demanded additional information because those unexplained discrepancies have the potential to alter the election outcome,” Miller Meeks’ campaign added.

Zach Meunier, the campaign manager for Rita Hart, said in a prepared statement the county auditors should ensure all votes are accurate in a statement on Friday.

“We understand that the county auditor of Jasper County is undertaking an administrative review to ensure that the vote totals from that county — which have been verified by Iowa’s Republican Secretary of State Paul Pate and the Jasper County auditor and which show Rita Hart leading by 162 votes — are accurate,” he said. “We are confident by the end of this process that Rita Hart will be the next congresswoman from Iowa’s Second District.”

Pate and Parrott held a press conference in Newton on Friday to discuss the unofficial election results in the county.

“This discrepancy impacted candidates in both political parties, nonpartisan candidates, judges, and statewide public measures,” Pate told reporters. “The major race that was impacted here is the 2nd Congressional race. The integrity of Iowa’s election is my top priority as state commissioner of elections, which is why I’m ordering an immediate audit of the impacted precinct, additionally I’m requesting that a county-wide recount be conducted of all votes cast of Jasper County.”

Parrott said the mistake, which resulted in some candidates getting “more votes than other candidates that they shouldn’t have” was the result of human error, not a technical problem. The error affected the Clear Creek-Poweshiek precinct, where 561 votes were cast. He also assured reporters it was an honest mistake.

“Any question of impropriety is way out of base and I want to make that very plain right now,” Parrott said. “My staff and the people working for us part time did nothing illegal, nothing wrong. We followed everything by the book, step by step, and it’s too bad in our country that question has to be asked.”

Both Pate and Parrott drove home the point that Iowa’s electoral systems were working properly, and that elected officials are following the rules to get accurate results. Pate said he understood emotions were running high in this situation because of the narrow 2nd Congressional District race. Parrott said in almost every election there are minor errors that the system catches.

“It’s a very technical job. It’s a job that’s got steps, it’s got code sections, it’s got administrative rules. We follow all of those as do all of the auditors,” Parrott said. “It’s a process that works. I will tell you this, in almost every election there’s a minor issue. We can’t find a ballot [or] we don’t have one of the affidavits … We correct things all the time, this just happened to be a correction in the middle of a very very tight race, and it’s consequential.”

Parrott said ballots are currently held in voting machines in sealed plastic bags, and that a team of Republicans and Democrats will run them through the machines beginning on Saturday for the recount.