While the rest of the country waits for a winner, President Trump once again won the Hawkeye State. 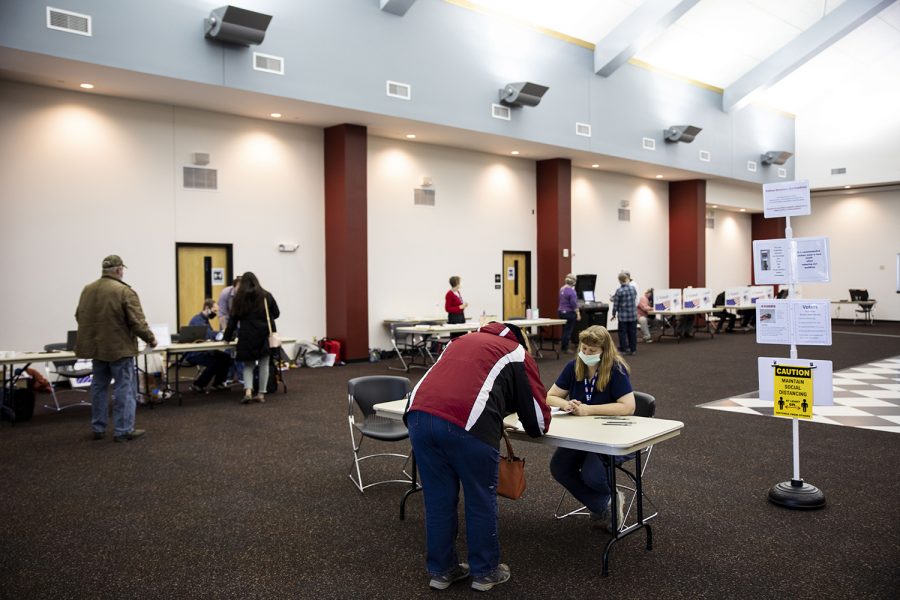 Signing in, As seen on Nov.3,2020. Voters must sign in and show id’s to vote at the Wilton Community Center Poll Place, 1215 Cypress St.

Amid a pandemic, record voter turnout, and social unrest, Iowa prevailed on election night when it came to delivering election results by midnight while other parts of the country still counted ballots and the nation waited on who won the presidency.

Donald Trump was winning Iowa at 11:30 p.m. with 52 percent of the vote, when the Associated Press called the state for him over his Democratic challenger, Joe Biden.

“My biggest issue is you know just taxes, you know, making sure that you know I can make the most of my money, so that was a big issue,” said Phil Scheets, 29, of Iowa City. A contractor for a painting and construction company. Scheets said he voted for Trump.

The coronavirus pandemic set the stage for an unconventional presidential election, leaving battleground states Georgia, Wisconsin, Michigan, and Pennsylvania up in the air by the end of the night on Nov. 3 because of the influx in mail-in ballots.

A third of all Iowans voted by mail, and county auditors in the state began opening ballots on Saturday because of a provision approved by the Iowa Secretary of State’s office. Many swing states, like Pennsylvania and Michigan, could not start opening ballots until Nov. 3.

Voters across Iowa who voted early and on Election Day showed up wearing masks, and in some parts of the state, like Des Moines, voters stood six feet apart in lines that stretched down sidewalks.

Shannon Williams, 38, a registered Democrat and Des Moines resident, said she voted for Biden because, as a Black woman, she thinks Biden has her interests in mind. Along with a pandemic, this election comes during a movement for racial justice after a police officer killed George Floyd in Minneapolis.

“I don’t think Donald Trump is for the Black culture at all,” Williams said. “I think he is going to incite a race riot eventually, and it’s going to get worse if he gets back in again, and I don’t want that. Biden wants peace, he wants to help us — help the people, not just us — the people.”

Black Lives Matter protests popped up across the country over the summer and have continued on throughout the year. Since then, Trump has made comments about BLM, saying it’s “bad for Black people, it’s bad for everybody.”

Protests in some U.S. cities led to the destruction of buildings and storefronts. In preparation of Election Day, businesses boarded up their windows in case of post-election protests.

Peyton Steva, a University of Northern Iowa student voted in her hometown of Iowa City, said she voted for Biden. “I have a lot of African American friends and I’m bisexual myself so I have a lot of LGBTQ plus friends and they don’t feel safe and it just makes me makes me sad,” Steva, 19, said.

North Liberty resident Gary McDowell, 53, is a registered Republican but said he voted for Democrats down the ballot. McDowell works at MidAmerican Energy and took the day off of work to ensure he could cast his vote in time.

Nationally, there is a trend of Republicans voting against Trump. Former Iowa Congressman Jim Leach is among  600 prominent Republicans who publicly endorsed Biden.

Trump, Biden, and their campaign surrogates made swings through the state in the days and weeks leading up to the election to bid for Iowa’s six electoral votes. It was Biden’s first visit to Iowa since the state’s presidential precinct caucuses, which launched the campaign in February.

Trump’s rallies faced scrutiny from Democrats and public-health experts for the lack of social-distancing guidelines with thousands of people packed together on airport tarmacs, many without masks.

University of Iowa student Jaelynn Hauschild, 19, a registered Democrat, said she voted for Trump in Iowa City because she doesn’t think Biden would handle COVID-19 the way she would like. She said she disagrees with imposing more regulations.

“The main thing I’m voting for is COVID,” said Hauschild, of Cedar Rapids. “A lot of his [Trump’s] other stances I don’t believe in, but I think COVID-19 has affected me the most and that’s what’s important to me right now.”