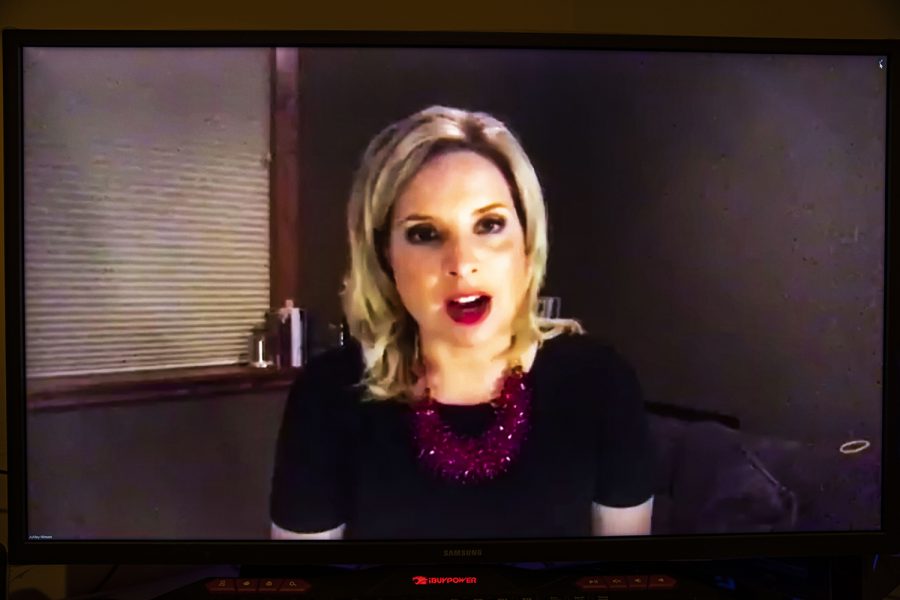 Acceptance speech. As seen on Nov. 4, 2020. Republican Ashley Hinson gives her acceptance speech and thanks all her supporters in the race for US House District 1. Hinson also thanked members of her team. This was a virtual event.

Hinson claimed 51.25 percent of votes to win the election, while Abby Finkenauer won 48.65 percent of the votes, according to unofficial results. Those results will be certified by county on either Monday or Tuesday following Election Day.

“Tonight we sent a very clear message that the voters of Iowa are tired of the chaos and disfunction in Washington D.C. and they are ready for a change,” Hinson said in a press conference after results were announced.

Finkenaur unseated incumbent Republican Rod Blum in the 2018 election, making 2020 her first chance at reelection to her seat.

On Wednesday, Finkenauer released a statement conceding to Hinson, after the campaign initially stated it would be waiting to review the results on Tuesday night.

“Today I called Rep. Hinson to offer my congratulations and concession in the race for Iowa’s First Congressional District.” The statement said. “While it’s important to review all available election data and ensure every vote is counted, I respect our democratic process and the will of the voters.”

Finkenauer said it has been an honor to serve the 1st District and she will keep working tirelessly to finish out her term and transition.

“I love our state and our country, and I still believe in the promise of a democracy that represents and serves the interests of its constituents.” the release stated.  “We must never give up hope that we can be an Iowa and a country defined by compassion, empathy, grit and determination to get things done.”

Hinson is a state senator representing Iowa’s 67th District in Linn County. In 2016, Hinson defeated  Democrat Mark Seidl, 62.5 percent to 37.5 percent and was reelected in 2018.

Prior to her time in the Iowa Statehouse, Hinson was a news reporter at KCRG-TV in Cedar Rapids. She has since called herself  a “recovering journalist.”

A major platform of Hinson’s campaign is creating jobs for Iowa’s economy and permanent tax cuts for middle-income homes. On her campaign website, Hinson said that she wants to “help American taxpayers keep more of their own money.”

“I want to make the tax cuts passed by Republicans permanent. And I also want to hold China accountable, and those are things that I pledged to work on right away,” Hinson said.

A Dubuque County native, Finkenauer previously served in the Iowa House of Representatives after graduating from Drake University. Since being elected to Congress, Finkenhauer has served on the Transportation & Infrastructure Committee as vice-chair of the Highways and Transit Subcommittee and Water Resources and Environment Subcommittee.

Finkenauer also chairs the Rural Development, Agriculture, Trade, and Entrepreneurship Subcommittee for the Small Business Committee while also serving as Assistant Whip for the House Majority.

“Given tonight’s historic turnout and the record number of votes cast early and by mail, Finkenauer for Congress will continue to review election returns and data on outstanding ballots,” Finkenaur campaign manager Ned Miller said in a statement. “Our team will conduct that review as quickly as possible and provide an update on Wednesday. Under Iowa law, ballots received as late as Nov. 9 may be counted.”

Owner and manager of Blue Diamond Farming Company in Jesup Benjamin Riensche voted for Hinson. Riensche, 59, has been a farmer for 28 years in Iowa. Riensche was called up by Hinson a year and a half ago and she asked him what was important for farmers in Iowa.

“She just heard me out and listened to my opinions…When you send somebody to Washington I mean, all the rhetoric aside, the most you can hope for is, they’re going to represent their constituency,” Riensche said.

Riensche is a registered Republican and voted more conservatively this election, but said he splits his ticket depending on the positions of each candidate. He said he is scared about taxation because he has a lot of assets in his business that he wants to protect.

“There’s a tendency from people from urban situations to want to govern. They’re used to the government doing everything for them, you know,” Riensche said.  “I just want to keep those assets in place so I can give it to my children, and I fear that the other side just will tax them away from me,” he said.

Hinson opposes a Medicare For All bill and endorses patient-centered health and accessible healthcare for rural Iowa communities.

On Sept. 7 during Hinson and Finkenauer’s first and only debate of the election, Hinson and Finkenauer disagreed on COVID-19 economic relief and a requirement for vaccinations. Hinson said that the use of President Trump’s executive order for COVID-19 relief to target money at employees and families that were struggling was the correct response.

Hinson, a native of Des Moines, was called a “true supporter of our #MAGA Agenda” by President Trump on Twitter when he endorsed her in mid-October.

In August, Hinson was caught up in a scandal when one of her campaign staffers plagiarized multiple speeches written for Hinson. Hinson’s staff plagiarized over a dozen times by taking verbatim passages from articles in the Des Moines Register, The Hill, the New York Times, and CNBC.

The speeches also took phrases from opponent Finkenauer’s platform on veteran issues. Hinson apologized on Twitter on July 20, tweeting “I was unaware of the plagiarism when I reviewed drafts presented to me by staff. As a journalist I take this extremely seriously and am deeply sorry for the mistake. The staff responsible will be held accountable,” she said.

Hinson cut ties with the FP1 Strategies consulting firm that was responsible for the plagiarism in her campaign speeches, and terminated the member of her staff who approved the speeches.