With no fans allowed in the stadiums, students gathered at bars and restaurants to watch the Hawkeyes play. 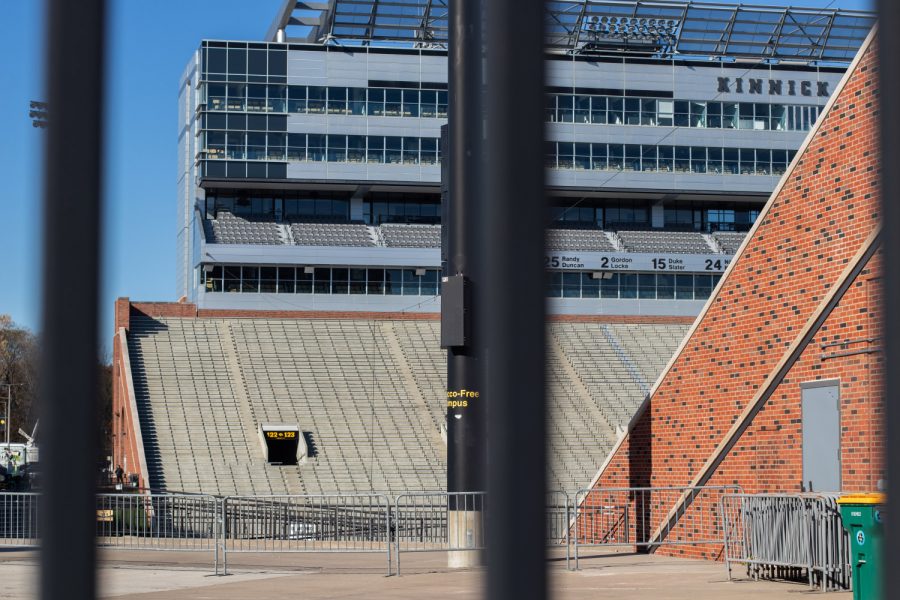 Kinnick Stadium, home to the University of Iowa Hawkeyes, is seen on a sunny Saturday, game day afternoon. Tailgating has looked a lot different recently in the light of COVID-19, as both the streets and the stands remain empty. The Hawks are playing Northwestern.

Iowa football hosted its first home game of the 2020 season on Halloween, which ended in a tight loss against Northwestern. Though students were not allowed to watch the game in Kinnick Stadium or tailgate outside of it, that did not stop large gatherings of students watching the game from forming.

Downtown Iowa City was filled by students wearing black and gold and heading to bars and tailgates to watch the Hawkeyes on television.

Summit, Brothers, Sports Column, and The Airliner were among the many bars that had lines of students and Hawkeye fans waiting to get in.

“It is going to be crowded downtown today,” said Ryan Prowhig, a senior studying engineering. “Especially with it being Halloween and stuff like that, it is going to be a plain mess.”

The University of Iowa has been promoting game-day safety over the last two weeks, sending emails to students and setting up street signs indicating that parking lots won’t be available for RV or tailgate parking.

While students are no longer allowed to tailgate around Kinnick Stadium, that has not stopped them from gathering at houses or other areas unrestricted by the UI, in order to continue game-day traditions.

“We will watch it wherever we can, we will try to still have some people over,” Prowhig said. “Tailgate, have some fun, and try to watch it with some people.”

With so many students gathering in large numbers, fears of further spread of COVID-19 are increased.

While bars and restaurants have protocols in place like mandatory mask-wearing, staying at a table, and only allowing in under 50 percent capacity, house parties and outdoor tailgates do not have such measures.

“It is half and half because I think some people are just over [the pandemic],” said Megan Gillenwater, a senior studying psychology. “Then there are people who are still like protective and are careful.”

As seniors, this was the last year that Gillenwater and Prowhig would have been able to go to the games as UI students. Both said they were disappointed that they couldn’t buy season tickets for this year’s games like they have in the past.

“I usually do [buy season tickets] because the school gives you a good discount on them, so why not?” Prowhig said. “It was so sad, especially with this being my last year because I was like ‘Yes, final time.’”

Bars and restaurants in downtown Iowa City look to be the main attraction for students looking to find a good atmosphere to watch the Hawkeyes this season. The big question will be whether or not COVID-19 cases rise after these large gameday gatherings.

Iowa will take on Michigan State at home on Nov. 7 before a matchup on the following Friday at Minnesota. The Hawkeyes are still searching for their first win this year, and fans are hoping that the team can turn things around.