Theresa Greenfield spoke with a small group of Iowans about the need for affordable college, childcare, and housing. 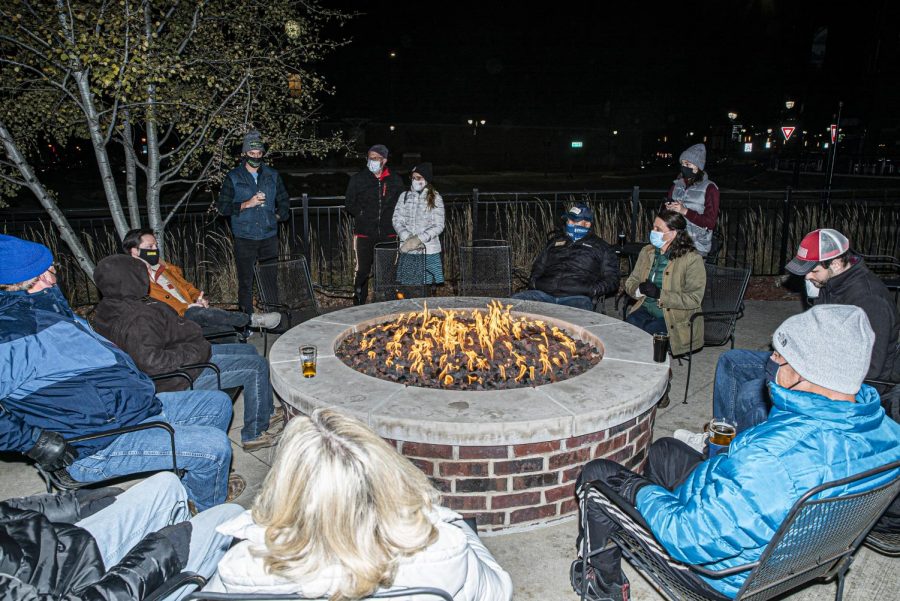 Senate candidate Theresa Greenfield enjoys a beer with a small number of supports at Backpocket Brewery in Coralville on Sunday, November 1st, 2020. Greenfield and her campaign team felt tit was important to hold events in a limited and safe capacity. (Tate Hildyard/The Daily Iowan)

On Sunday night, Democratic candidate for U.S. Senate Theresa Greenfield held an intimate event at Backpocket Brewery in Coralville where she asked attendees what political issues matter to them most.

The event was one of three stops in Greenfield’s “Jobs That Need to Get Done” Tour where she also stopped in Clinton, Scott, and Muscatine Counties before her stop in Johnson County. This tour stop had about 20 people gathered in winter coats around a fire.

Greenfield said she likes having events in small, intimate settings because she wants to invite people to their stories and what their priorities are.

Important issues that came up in conversation today and in previous discussions, Greenfield said, are making things like college, childcare, and housing more affordable.

“Iowa used to be very progressive when it came to investing in school. I had about 75 percent of my schooling funded, so I had no debt when I came out of school and it really helped me get started,” Greenfield said.

If given the chance to vote for cabinet positions, Greenfield said she would vote to confirm a Secretary of Education that has experience with public education, a trait that Betsy Devos, who currently fills that office, does not have. She also vowed to vote in favor of the John Lewis Voting Act, a bill that would restore portions of the 1965 Voting Rights Act that were invalidated in 2013, which is currently in the Senate.

This election, Greenfield said, there are about 200 less polling locations open in Iowa than previous years due to the coronavirus and a lack of volunteers.

“There was talk of communicating with voters who may be going to their old voting location and redirecting them to where their new polling place is,” Greenfield said.

Greenfield called this race one of the closest in the country as she spoke with her supporters.

The poll of 814 likely voters was conducted by Selzer & Co., and has a margin of error of plus or minus 3.4 percentage points.

“When you see the changes over time, just radical changes, in the first district especially, it just doesn’t make any sense and I don’t think they should have reported it, quite honestly,” Loebsack said.

The second half of Greenfield’s tour will continue Monday where she will stop through several more Iowa counties.

“This race has been close since the day we launched and I think it will be a toss-up until the very last vote is counted,” Greenfield said.