The Hawkeyes were not on the field when the anthem was played in West Lafayette in Week 1. 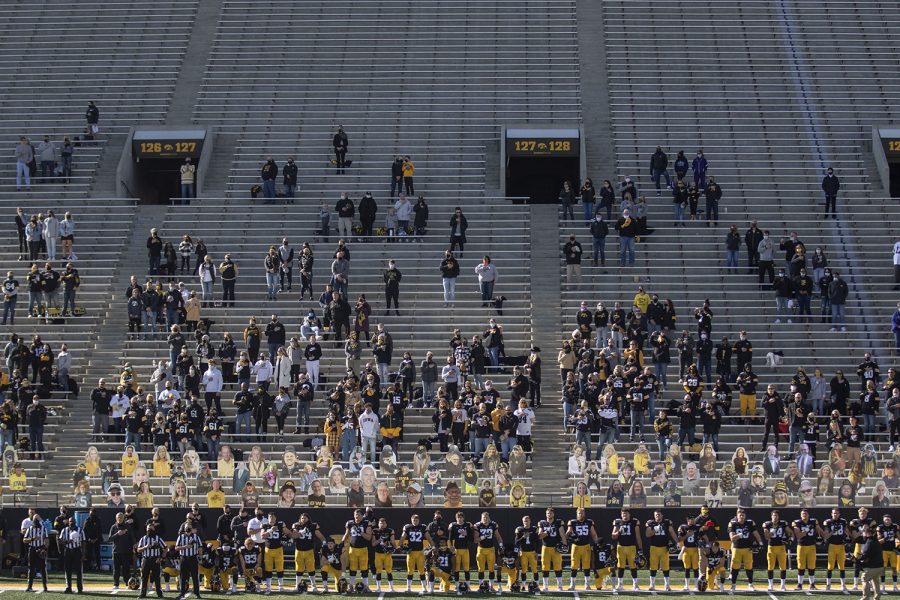 Players kneel and stand for the national anthem before the Iowa v Northwestern football game at Kinnick Stadium on Saturday, Oct. 31, 2020. Head Coach Kirk Ferentz did not kneel for the anthem. Iowa is leading Northwestern with a score of 20-14 at the half. (Katie Goodale/The Daily Iowan)

More than two dozen Iowa football players knelt during the playing of the national anthem before Saturday’s game against Northwestern at Kinnick Stadium.

Following George Floyd’s death while in the custody of Minneapolis police officers, and the allegations of racism made by former players against the Iowa football program, safety Kaevon Merriweather tweeted in June that he and other members of the team were going to use their platform and kneel for the anthem.

Iowa was not on the field last week in West Lafayette for the national anthem, so this weekend’s game was the team’s first opportunity to kneel.

A number of Iowa players took a knee during the National Anthem Saturday: pic.twitter.com/VfDONq2WwF

“If you can not support us right now with this movement and with our team taking a knee during the national anthem, do not support us during the football season,” Merriweather tweeted June 8. “Do not watch our games on TV. Do not come up to us when you want photos. Do not ask us to give your kids autographs. Don’t come to us expecting us to do for you when you can’t support the Black athletes on this team and the decisions we make as a team.

Iowa wide receiver Tyrone Tracy confirmed on Oct. 20 that he would kneel during the national anthem. Tracy said that head coach Kirk Ferentz gave members of the team the option to kneel or stand during the anthem.

“I know how African Americans are treated in the United States, so me taking a knee is to let everyone know what I stand for and what I believe in,” Tracy said Oct. 20. “I do think there are a lot of different things going on in the world that need some change. I think here in the organization we are going in the right direction. We’ve taken steps to provide change.

“If they want to kneel, they’ll kneel. If they want to stand, they’ll stand… I’m almost positive everyone is not going to do the exact same thing. But at the same time, we are still a team. We’re still going to go out there and look unified.”

Ferentz stood during the anthem with his hand on the shoulder of running back Leshon Williams, who was kneeling.

United as one family. #Hawkeyes pic.twitter.com/5kjLciL4Pa

“I’m convinced right now that we’ll see a variety of stances taken by our team,” Ferentz said Oct. 20. “But I can also tell you, based on what I heard in three separate meetings, is everybody’s very respectful of each other. Nobody is judging each other or taking roll or any of that kind of stuff. They’re being a good team. Acting like a team should. I’m extremely impressed with how the guys have handled it.”

Northwestern’s players all stood during the anthem.