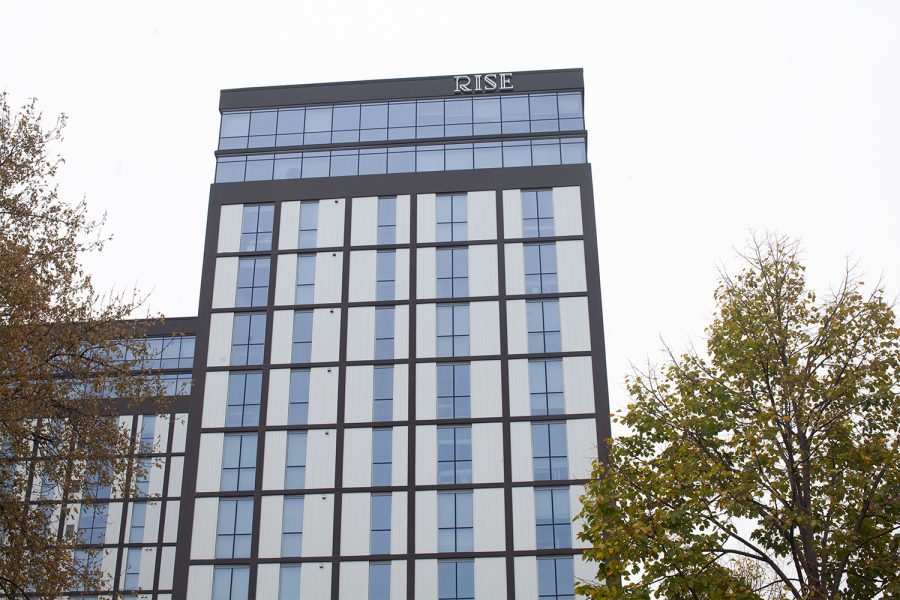 RISE at Riverfront Crossing on Linn St is seen on October 26 2020.

The Iowa City City Council approved a height extension request from the developer in its Oct. 20 meeting.

The building, which will sit near the intersection of S. Gilbert Street and E. Prentiss Street, will have 211 units, three floors of parking, study spaces, a fitness room, and an 1,800 square-foot courtyard.

City Councilor Pauline Taylor said she was happy with the direction of the project and felt good about supporting the request for increased height, but said she felt it was important not to forget the development of cost-effective housing.

“My only problem, which I mentioned in the meeting, was that it is going to be geared toward the student population,” Taylor said. “Which is fine, but we all keep stressing that we need affordable housing for all persons, especially families and lower income folks. But it’ll be fine for students too because of the location.”

Taylor said the development of the building would also bring improvements to the surrounding area that she said hasn’t received much attention in the past.

“We really were pleased with the project,” Taylor said. “Since it’s right off of Ralston Creek they’re also agreeing to clean that area too and kind of make it a pleasant area to walk and sit … the creek has been ignored for quite a while so that was a good proposal on their part, there’s a lot of good things about it.”

Iowa City has seen construction of several apartment complexes marketed toward students in recent years, which include a host of amenities and modern design, at the expense of a high price tag.

One of the most prominent of these, partly because of its 15-story height, is Rise at Riverfront Crossing.

UI junior Justin Wilk said he currently lives with a roommate in Rise apartment complex on S. Linn Street, which is just a few blocks away from this new proposed building.

He said he wasn’t convinced the cost of living there was justified, but that he was happy with his situation regardless.

“You pay a lot of money and some people have extremely, extremely small rooms and some people have bigger rooms. It’s just kind of uneven,” Wilk said. “But I like my situation, my room’s awesome. I don’t know if it’s truly $1,000 per-person worth for the size that it is, but it is for sure nice.”

Unlike Rise, the new housing project will not include some of the luxury amenities of other apartment complexes, such as swimming pools and game rooms.

UI junior Sam Sommerfeld lives in Whistler apartments on Iowa Avenue, a significantly smaller complex compared to Rise. He said he was mostly indifferent to the development of new student-centric apartments, but that he thought too much development could compromise the feel of the town.

“Rise I think varies between $800 and $1,600 per month,” Sommerfeld said. “For me, personally living at Whistler, I wanted somewhere new or on the nicer side, study rooms, a rooftop — amenities that appealed to me. I do think there should be a limit on how many new buildings should be built … I think if there are too many places built it waters down the character of Iowa City.”