Email thread within the College of Dentistry community sparks debate

On Oct. 16, the College of Dentistry wrote a statement condemning an Executive Order from President Trump. Immediately after, chaos ensued, as College of Dentistry students, faculty, and staff members questioned the university’s response in emails sent to more than 1,000 members of the college. 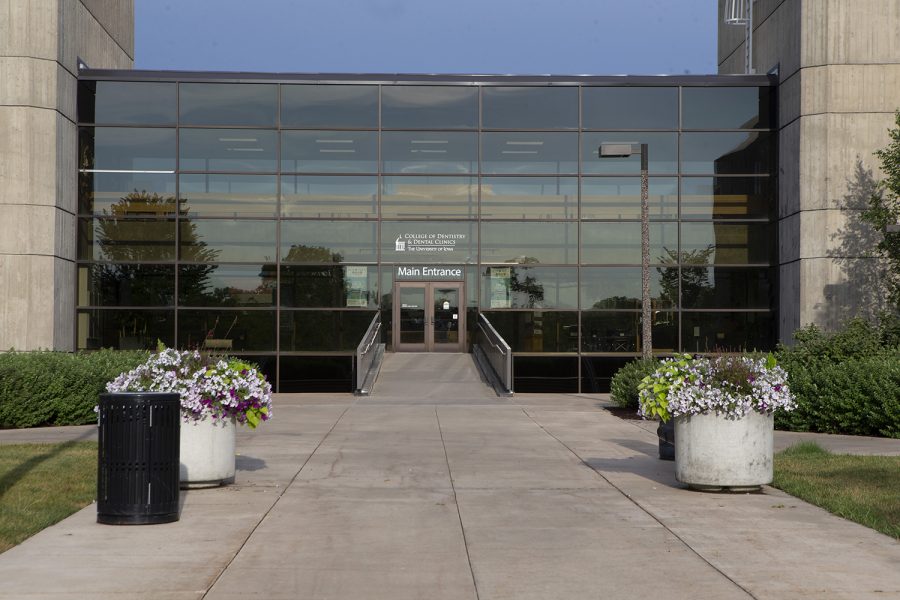 The UI College of Dentistry and Dental Clinics building is seen on July 17, 2019.

About 1,200 people in the University of Iowa College of Dentistry received a thread of emails on Oct. 16, where professors and students debated the purpose of an Executive Order from President Trump that aims to “combat offensive and anti-American race and sex stereotyping and scapegoating.”

After the UI’s College of Dentistry put out a letter to faculty, students, staff, and residents condemning an Executive Order from President Trump, one student hit reply-all questioning the college’s response, triggering the responses that came after.

In the college’s campus-wide email list service, several of the college’s members weighed in on an email thread after the college stated that UI College of Dentistry leadership strongly condemned Executive Order 13950, saying the order “prohibits trainings that are crucial to progressing toward a more equitable and just society.”

Approximately 18 emails were sent within two threads discussing the college’s memo. One faculty member wrote, “I for one can not support Black Lives Matter,” prompting a call from a student group for more diversity, equity, and inclusion training within the college and a statement from the dean reaffirming the college’s position.

Of the emails that were obtained by The Daily Iowan, four students and four faculty and staff members responded, some with multiple responses. The conversation sparked a debate among students and professors on the content of the White House order.

As previously reported in the DI, Trump’s Executive Order signed Sept. 22 aims to “combat offensive and anti-American race and sex stereotyping and scapegoating.” The order was roundly condemned by university administrators, who called the intention and language behind the order “deeply disappointing,” and student government, faculty, and students for its racist undertones.

After an email was sent on Oct. 2 by Interim Associate Vice President for Diversity, Equity, and Inclusion Liz Tovar, the UI paused diversity, equity, and inclusion training provided by federal contractors and federal grantees. On Oct. 22, the UI Training Review Committee lifted the campus-wide pause.

One UI student within the college, Michael Brase, was the first to respond to the college’s initial email, stating that he required further clarifications, asking, “By condemning Executive Order 13950, does the COD support using federal funds to promote trainings that include race/sex stereotyping and/or race/sex scapegoating?”

Brase confirmed with the DI that the responses sent to the entire college were from him. Some within the college chose to send a message of support with the college’s decision to condemn the Executive Order. Others weighed in supporting Brase and his concerns.

“Do exactly what the EO encourages,” Brase said in a follow-up within the email thread. “Continue to provide training that encourages respect and equality for all races/sexes. Why should the trainings we give have to condemn any given race/sex? How does that promote unity and equity? How does that engender feelings of compassion, forgiveness, and charity? Simply do the trainings without intentionally race/sex scapegoating people in those trainings. That shouldn’t be that hard.”

Among those that weighed in, Assistant in Instruction in the Department of Periodontics Nancy Slach replied showing her support for the Executive Order. Slach stated in her response that all individuals in the country are created equal and should be allowed an equal opportunity under the law to prosper based on individual merit.

She ended her email within the thread stating that “…as a Conservative Christian, I feel my point of view is underrepresented at the University of Iowa. It is difficult to express differing points of view in such a liberal environment.”

“Until this time, it has been difficult, if not impossible to speak out about the training and ‘education’ we are receiving that I believe is not beneficial,” Slach said. “I think much of the information produced by the University is subtle and trying to have us conform to the liberal viewpoint. I for one cannot support Black Lives Matter. I do not think this organization is what many think it is.”

Slach did not respond to the DI’s requests for further comment.

A few students chose to respond within the thread by simply stating they “supported the condemnation of the Executive Order.”

The Executive Order says that some DEI trainings “resurrect the discredited notions of the nineteenth century’s apologists for slavery” who said America “was made on the white basis.” It goes on to read that these teachings are “designed to divide us and prevent us from uniting as one people.”

Soon after the thread, the dentistry college’s student advisory board, a group of students led by the Director of Dental Counseling and Wellness Support Services, weighed in on the email thread with the full support to condemn Executive Order 13950.

“The tension and dialogue expressed in response to the condemnation of the Executive Order highlights the need for implicit bias training and open discussions rooted in diversity, equity, and inclusion,” the statement read. “In order to continue with the College of Dentistry’s DEI strategic action plan that includes training for students, faculty, and staff, which was supported by a majority of the D2, D3, and D4 classes, the Executive Order must be condemned.”

The College of Dentistry’s diversity, equity, and inclusion strategic plan includes goals related to improving recruitment and graduation rates of underrepresented groups and provides support for DEI-related programming and training.

Dean of the College of Dentistry and Dental Clinics David Johnsen replied to the thread the following day and said he stood by his signature on the original memo that condemned the order.

“The right of a university to engage its people to think and reflect on our history, culture, DEI programs, science, etc. faces restriction,” Johnsen wrote in the email. “The issues raised in the Executive Order follow or are related to violence against Black Americans, free speech, and basic respect for each other…We are beginning to discuss attempts after the election to bring some healing with the divisions we now face. I welcome personal discussion on any of the issues raised.”

As for the email thread, a few members within the thread had requested to be removed from the LISTSERV after the emails that had been delivered. According to the Information Technology Services website, subscribers can be from the university community or the general public.

It is unclear whether the emails sent by faculty and staff would violate university policy.

According to the UI’s Chapter 19 Operations Manual on Acceptable Uses of Information Technology Resources, individual responsibilities include refraining from prohibited personal uses. Information technology resources, including the university’s electronic address (e-mail, web), shall not be used for personal commercial gain, for charitable solicitations unless these are authorized by the appropriate university officer, for personal political activities such as campaigning for candidates for public office, or for lobbying of public officials.

The Office of the Executive Vice President and Provost outline particular guidelines of political activity by faculty at the UI. According to the guidelines, the UI policy on Professional Ethics and Academic Responsibility states that every faculty member has “the rights and obligations of any citizen… [including] the right to organize and join political or other associations, convene and conduct public meetings and publicize his or her opinion on political and social issues.”

The guidelines also lay out how faculty members may use their university title for identification purposes as long as the use of the title does not imply the individual is speaking or acting on behalf of the university.

“University policy further provides that “[o]n controversial issues within the scope of the course a reasonable range of opinion should be presented. When the faculty member presents his or her own views on such issues, they should always be identified as such. Moreover, every student is entitled to the same intellectual freedom which the faculty member enjoys. The faculty member must respect that freedom. Restraints must not be imposed upon the student’s search for or consideration of diverse or contrary opinion,” the guidelines state.

In sum, the guidelines state that all faculty members are entitled to their own opinions and beliefs, but must not allow it to conflict with their work.

President of the American Association of University Professors Loren Glass said that all faculty have freedom of speech guaranteed by the first amendment, but are not allowed to speak for the university.

“We are not allowed to endorse political opinions in our capacity as leaders of the university,” Glass said. “…All I can say is that I try to be careful in what email I use and in what voice I speak when I express my opinions.”

Staff members of the UI are “fully supported” in their constitutional right to express their personal opinions regarding political candidates and issues that do not affect their university employment.

In an email to The Daily Iowan on Monday, Johnsen stated that the college had been in discussions with departments and individuals to discuss concerns.

“What we have shared is that we want every member of our collegiate family to feel welcome, safe, and valued,” Johnsen said in the statement. “I am sorry that an email intended to show our support for diversity, equity, and inclusion training and the latitude to be able to talk about DEI and other subjects lead to an exchange that left some members of our college feeling hurt and anxious. We encourage anyone who needs assistance or wants to meet with me or a member of my team to contact my office. My door is open.”

As for Brase who initiated the thread, he said his initial email was sent to seek an understanding as to why the school condemned the Executive Order, calling it a strong political statement.

“The school administration has done well at being responsive to potential concerns regarding this issue,” Brase said in an email to the DI. “They have provided upcoming opportunities for students to meet with administration members to discuss an inclusive, equitable, and safe environment for all members of the College of Dentistry. I, along with other students at the College of Dentistry, look forward to continued collaboration with administration members as we all seek to constantly improve as individuals and as a community.”