The third-year player has dealt with injury troubles and tough challenges throughout her Iowa career so far. 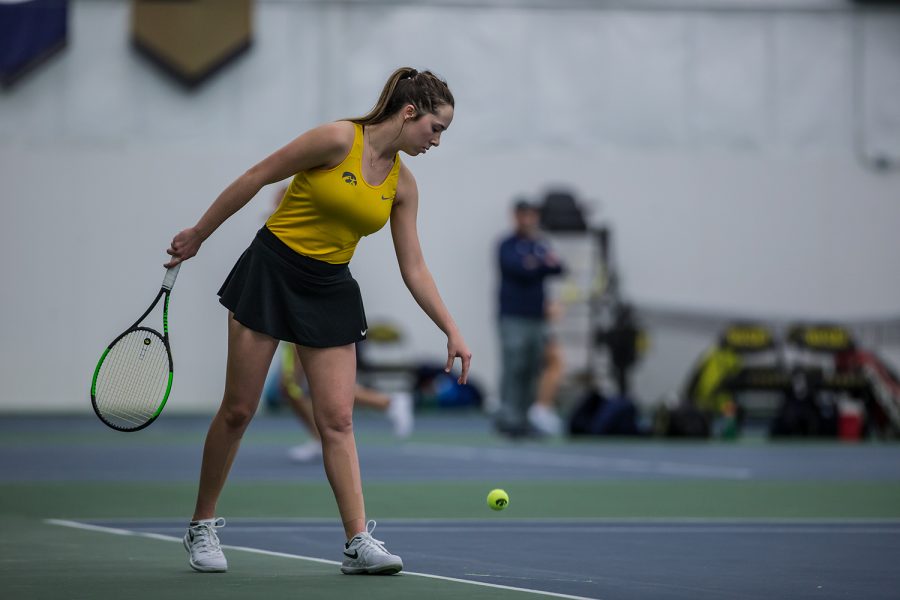 Iowa's Samantha Mannix prepares to serve during a women's tennis match between Iowa and Xavier at the Hawkeye Tennis and Recreation Center on Friday, January 18, 2019. The Hawkeyes swept the Muskateers, 7-0.

A loaded roster will be on full display for the Iowa women’s tennis team this spring. With the return of Intercollegiate Tennis Association Central Region Player of the Year Elise van Heuvelen Treadwell and the addition of a highly anticipated group of freshmen, this year’s team is hoping to erase the 6-6 record of 2020.

Samantha Mannix, a 6-foot junior who has flown under the radar for the Hawkeyes the past two years, is looking to have a breakout season this spring.

“Now being an upperclassman, I have the experience that I didn’t have coming in my freshman year or even my sophomore year,” Mannix said. “I just want to be able to play my best every single match and compete.”

The injury bug has not been kind, as a lingering ankle injury suffered in practice after the 2019 Intercollegiate Tennis Association All-American Championships kept her sidelined for most of the offseason before the spring.

“I was out pretty much until January from October,” Mannix said. “I had to work my way back really quickly because the season was coming up so soon, and it kind of affected my game because I really had to get back on the horse quickly and make sure my feet were where they needed to be.”

At 6 feet tall, Mannix is the tallest player on the Iowa roster. Movement and footwork are typically harder for taller players, which makes a severe ankle injury an even tougher task to overcome.

“Sam is tall, so movement is something that she has to always work on because she doesn’t have that low center of gravity in general,” head coach Sasha Schmid said. “When you have an ankle injury and you lose the reps on the movement and the efficiency with your footwork, you kind of have a little bit of a steep comeback to climb up.”

With her health now at 100 percent, Schmid said the key for Mannix is to keep improving her movement and use her big serve and heavy forehand to put opponents away.

The Elkhorn, Nebraska, native is coming into the year with a lot of experience under her belt having played the toughest competition in the top three spots in the lineup her first two seasons.

RELATED: Bacalla hopes to give Iowa women’s tennis a boost in 2020

“To start out at the one and two spots was definitely something I was excited about,” Mannix said. “I think as the past few seasons have gone by it has just been an amazing experience to be able to experience such high-level tennis on a regular basis.”

Mannix said that she expects herself and the team to put it all out on the line this year and utilize all six spots in the lineup to play the best tennis they can.