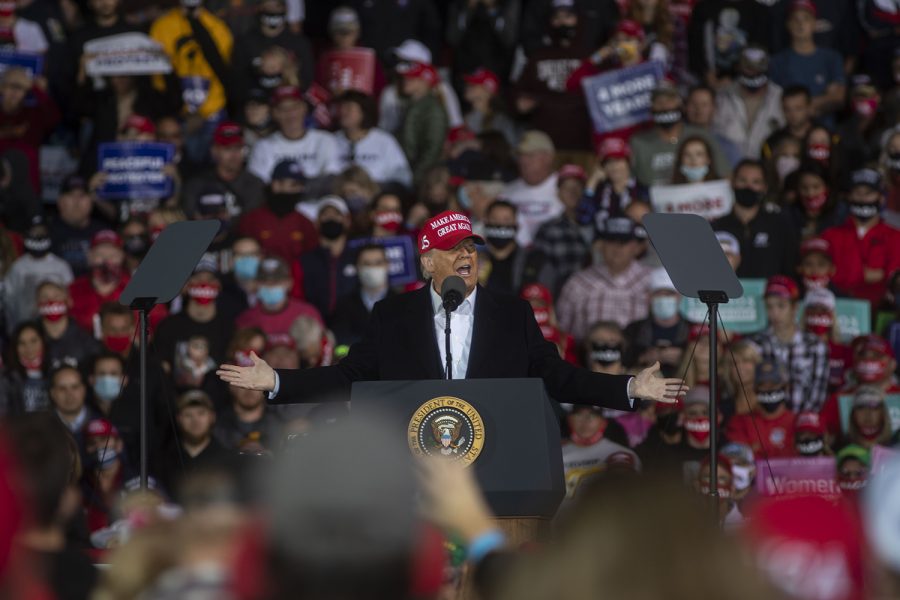 President Donald Trump speaks during a campaign rally on Wednesday, Oct. 14, 2020 at the Des Moines International Airport. Thousands of people showed up to hear President Trump speak about his campaign and support Iowa republicans for the upcoming election.

It contrasts a progressive vision of our nation’s history with “the pernicious and false belief that America is an irredeemably racist and sexist country; that some people, simply on account of their race or sex, are oppressors; and that racial and sexual identities are more important than our common status as human beings and Americans.” This “destructive ideology,” according to the authors of the Order, is “designed to divide us.”

This is pure projection:  The Trump administration is the most divisive in modern history and it divides us most fundamentally on the basis of race. The destructive ideology that they condemn—white supremacy—is the ideology they espouse, whereas the people whom they accuse of espousing it are in fact its fervent critics.

Both critical race theory and diversity workshops are intended to dismantle white supremacy, not endorse it. By attempting to outlaw these efforts, the Trump administration is working to uphold white supremacy while simultaneously denying that it exists.

But we know it exists, and we know it has existed since before the founding of our nation. This does not mean that progress hasn’t been made. Slavery was abolished; Jim Crow was abolished.

But there was always white resistance to this progress, and the current administration represents the triumph of that resistance, and therefore a serious and potentially devastating check on the progress we have managed to make over the last century.

The order asserts that this critique of American history and institutions is “fashionable in the academy,” but in fact it has been the lifelong work of generations of scholars who have dedicated their lives to researching and responding to racism and oppression in the United States. And academic freedom has provided these scholars with the autonomy and authority to conduct and circulate their research. Insofar as this Order challenges this scholarship, it is a threat to academic freedom.

The order then lists a series of “divisive concepts” that federal contractors will henceforth be forbidden from invoking, most of which involve modes of racial and sexual discrimination that are blatantly practiced and endorsed by this administration on a daily basis.

The only thing more shocking than the hypocritical projection is the threat to fundamental constitutional principles. The right to endorse or oppose or simply discuss “divisive concepts” is at the root both of our constitution and our national life. The government cannot infringe those rights without violating the first amendment.

But the Republicans in the Trump Administration don’t really care about the first amendment, nor do they care about the history of the United States. They care about staying in power, and they know that Critical Race Theory, the Black Lives Matter Movement, and the DEI initiatives being conducted on campuses and in workplaces across the nation, are a threat to that power. Like everything else this administration does, this Executive Order is yet another attempt to rally their shrinking base by projecting all its racism and sexism onto the rest of us. This cannot be tolerated.

We must continue to practice critical race theory, support Black Lives Matter, and participate in workshops that teach us how to better understand structural racism and white supremacy. We must continue to combat the lies and projections of the Trump Administration and the Republicans who support it. Only then can we make progress.