The Board raised concerns about the regressive nature of the tax, as well its timing and specificity. 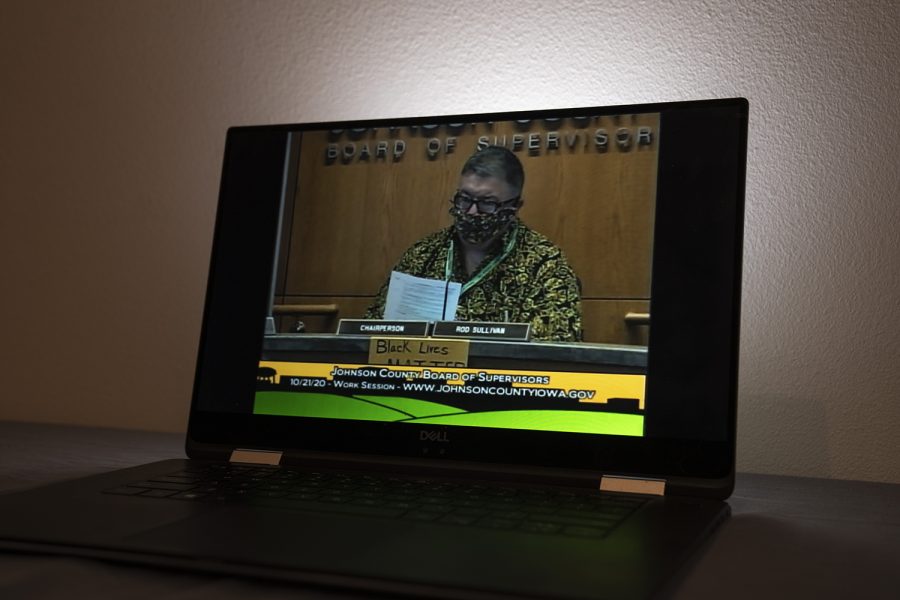 Chairperson Rod Sullivan reads the agenda during the Johnson County Board of Supervisors Work Session meeting that was held online at 9:00 AM on Wednesday, Oct. 21, 2020.

Iowa City is one of the rare cities in the Hawkeye State that doesn’t have a local sales tax, but that might be changing with a proposal brought to the Johnson County Board of Supervisors on Wednesday.

The current state sales tax rate is 6 percent, and local jurisdictions are permitted enact a Local Option Sales Tax (LOST) of up to 1 percent more. Project Better Together, a local community advocacy group, wants to add Iowa City to the list of participating jurisdictions.

“They want to act very, very quickly, and that’s why we added it to today’s agenda,” said Board Chair Rod Sullivan, who was invited to a call with Project Better Together the day before.

According to the information the group provided, it would need to send language for the proposal to the county by Dec. 14 in order to get the local option the March ballot.

Sullivan said Project Better Together is currently in the process of “checking the temperature” of local municipality leaders before making the proposal, but the Johnson County Supervisors were quick to express their disapproval of the potential proposal.

“All of the reasons that it doesn’t usually pass still exist,” Supervisor Lisa Green-Douglass said. “It’s still a regressive tax.”

Regressive meaning that the relative tax burden is higher for people with lower incomes than wealthier citizens. A 1-percent bump may not mean much to someone with money to spare but a worker living paycheck-to-paycheck needs every dollar they can get.

Sullivan expounded on his colleague’s point, referencing a new rule passed by the Iowa Legislature that dictates how the LOST must be structured.

“If you pass a local option sales tax, 50 percent of it is automatically dedicated to property tax relief,” the chair said. “You don’t control that part anymore.”

Sullivan also commented on the logistics of enacting a tax by Project Better Together’s proposed timeline, saying it would be nearly impossible to do so by March.

“I don’t think it really anticipates all that has to go into planning,” he said. “The public likes to know specifically what you want to do with the tax, and I think it’s really hard to get any type of agreement on anything this quickly.”

Supervisor Pat Heiden said she likes the idea of providing extra funds for the community, but questioned whether there would be better ways to do so. Sullivan and Green-Douglass also took issue with what they perceived as vague planning in the proposal, noting that it simply said “certain items” would be taxed at the increased rate and that revenue would go toward “community betterment/economic development.”

Project Better Together provided a table showing potential revenues that cities could see if the tax were enacted, saying that Iowa City could stand to see around $9 million in increased revenue. The opposed supervisors countered saying half of LOST funds must go to property tax relief.

“There’s plenty of room in every city and county budget that, if they wanted to do something at this expense, they could just do it,” Sullivan said.

Supervisor Janelle Rettig said she was happy to put the proposal on the ballot if the people wanted it, but she said it would be difficult to get it passed.

“When you add up the Republicans who have pledged to never support a tax increase, and you add the liberals — who don’t want to raise sales tax on the poor in order to give a tax cut to those who are wealthy enough to own property — it has a very narrow path to victory,” Rettig said.

Supervisor Royceann Porter said they should carefully consider the impact such a tax would have on lower-income people, but also acknowledged that economic development is important to get through the pandemic.

“I, too, don’t want this to have any impact on poor people,” Porter said. “I know this is a pandemic and we’re trying to figure out ways to help everybody, but we don’t want to hurt poor people more.”