The sophomore wide receiver said Hawkeye players will have the option to stand or kneel during the anthem. 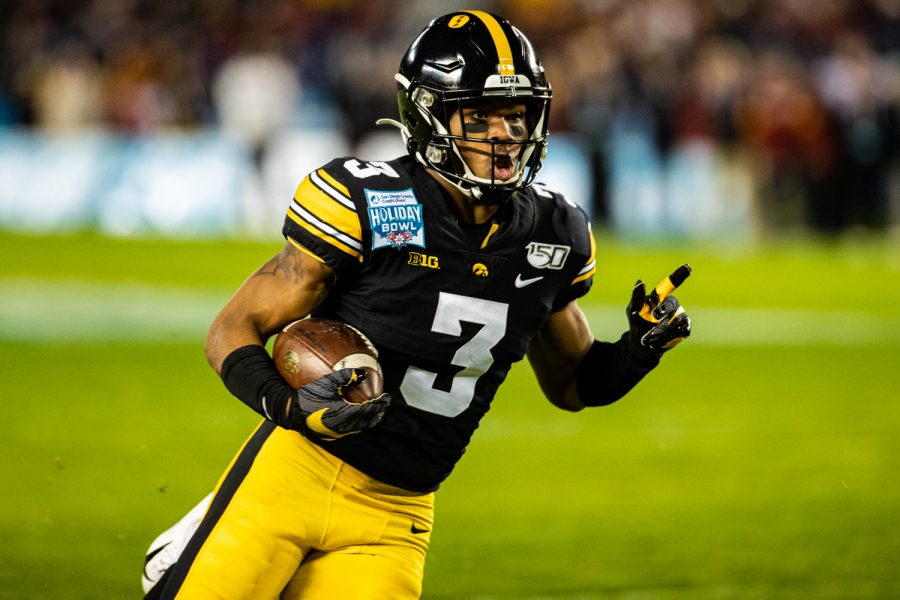 Iowa wideout Tyrone Tracy, Jr. carries the ball during the 2019 SDCCU Holiday Bowl between Iowa and USC in San Diego on Friday, Dec. 27, 2019. Tracy, Jr. scored first in the game with this 23-yard carry.

Iowa sophomore wide receiver Tyrone Tracy said on a video conference Tuesday that he will kneel during the national anthem on Saturday before the team’s season-opener at Purdue.

“I know how African Americans are treated in the United States, so me taking a knee is to let everyone know what I stand for and what I believe in,” Tracy said. “I do think there are a lot of different things going on in the world that need some change. I think here in the organization we are going in the right direction. We’ve taken steps to provide change.”

Every Hawkeye player will have the option to kneel or stand during the anthem.

Tracy said he is not certain what every member of the team is going to do during the anthem, but his teammates have respected each others’ decisions.

“If they want to kneel, they’ll kneel,” Tracy said. “If they want to stand, they’ll stand… I’m almost positive everyone is not going to do the exact same thing. But at the same time, we are still a team. We’re still going to go out there and look unified.”

The discussion over members of the Iowa football team kneeling during the national anthem this season started when sophomore safety Kaevon Merriweather tweeted in June that he would do so.

Following the killing of George Floyd by police and the allegations of racism within the Hawkeye football program, Merriweather said he planned to kneel for the anthem.

If you think you could possibly call yourself an Iowa Football fan and you can not agree with what I said and what this team is standing on. Then stop calling yourself a fan, IMMEDIATELY‼️ BECAUSE I CAN PROMISE YOU THAT WE DO NOT CARE‼️👎🏾 pic.twitter.com/DgYFY56ojv

“If you can not support us right now with this movement and with our team taking a knee during the national anthem, do not support us during the football season,” Merriweather tweeted. “Do not watch our games on TV. Do not come up to us when you want photos. Do not ask us to give your kids autographs. Don’t come to us expecting us to do for you when you can’t support the Black athletes on this team and the decisions we make as a team.

Out of the six Iowa players that were available on a media conference Tuesday, Tracy is the only one to confirm he will kneel for the anthem.

Quarterback Spencer Petras said he wasn’t sure what he was going to do. Petras mentioned he’s also unsure if Iowa will even be on the field during the anthem, as some Big Ten teams perform it while the opposing team is still in its locker room.

Linebacker Nick Niemann said to “wait and see” until Saturday for what he and the team will do during the anthem.

“My opinion is my opinion, and I think everyone is going to respect everyone else’s,” Niemann said. “There’s no one that is right or wrong. With everything that has happened this offseason, I think we’ve just focused on listening and understanding other people and respecting them. Whatever guys do is their choice and everyone is going to respect it. I think that’s what we’ve agreed is the best for the team and everyone just has to have the team first and see things from everyone’s perspective.”

Head coach Kirk Ferentz said Tuesday he has had three meetings with the team’s leadership group — which Tracy, Petras, and Niemann are a part of — about how to approach the anthem.

In one of those meetings, Ferentz said he shared a letter from a veteran who felt strongly that no one should kneel during the anthem. More recently, a former Navy SEAL told the group that he thought if a player wanted to kneel, they should stay true to their beliefs.

“I’m convinced right now that we’ll see a variety of stances taken by our team,” Ferentz said. “But I can also tell you, based on what I heard in three separate meetings, is everybody’s very respectful of each other. Nobody is judging each other or taking roll or any of that kind of stuff. They’re being a good team. Acting like a team should. I’m extremely impressed with how the guys have handled it.”