To the extent voting is part of the solution, the full Democratic slate is needed to begin repairing our broken country. Their platform and candidates are far from ideal, but they're the only option we have in our current set of crises. 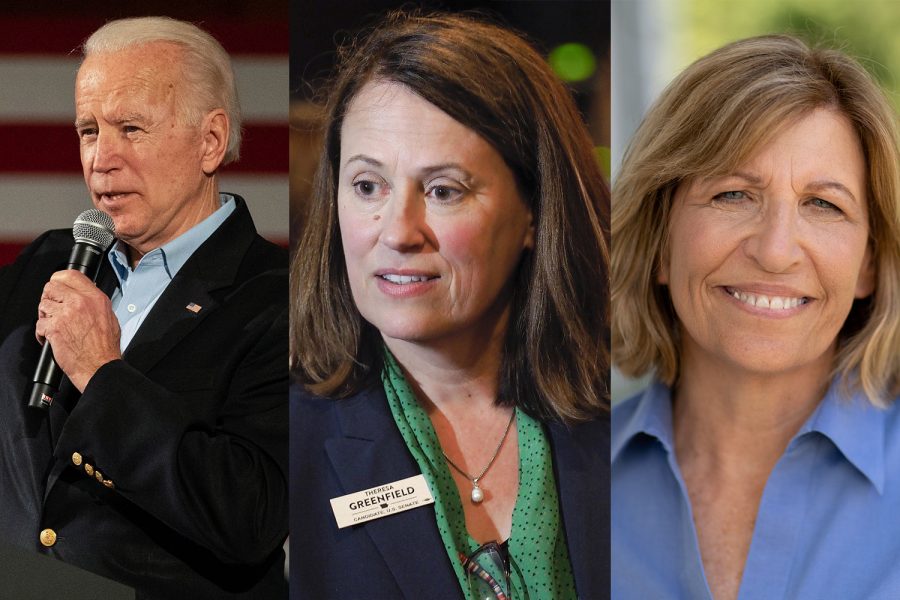 Republican control in Washington has taken our current emergencies and turned them into full-scale catastrophes. From COVID-19 to climate change to systemic racism, Iowa and the country need new leadership. That’s why we’re endorsing Democrats all through the ballot.

We don’t want it to be this way, but we don’t have a choice anymore. We don’t like that there’s only one party that has a chance of governing responsibly on a decent platform. We don’t even consider that platform sufficient, as Democratic solutions to our ongoing problems often lack the necessary scale and depth.

But we are certain that the Republican Party needs stripped of as much power as possible with this election. Led by President Trump and his allies in Congress, we have seen a viciously mishandled pandemic response, complete negligence of the climate crisis, and calls for racial justice answered with replies that are ignorant at best and blatantly racist at worst.

We’re not under any delusions that this election will fix all, or even most, of what’s wrong in America. There is so much work to do in all sectors of life in Iowa, Washington, and the rest of the nation. But as far as voting can help, it’s clear to us that the current president must be removed and his successor must have congressional majorities to enact an agenda that can begin to heal our country’s deep wounds.

Such an apocalyptic set of circumstances would be inconceivable if they weren’t our very real situation. But here we are. And Donald Trump is president.

The current White House occupant has again and again made the wrong choice. From his simple errors and misjudgments to his willful and vengeful self-destruction, it is clear we need a change in leadership.

Joe Biden — the only one who stands a chance to be that change in leadership — must be elected president.

The next chief executive must put science ahead of politics, as 200,000 Americans — including 1,400 Iowa friends, neighbors, and loved ones — have died from COVID-19.

President Trump has contradicted his own experts and downplayed the seriousness of the virus while privately confirming its deadliness. His careless attitude led to his White House becoming the an epicenter of infection.

Biden is on the side of the facts. The former vice president has already assembled a cabinet-in-waiting filled with specialists from previous administrations to hit the ground running if elected. Distribution of protective equipment and economic aid could be implemented as soon as his first day in office. That’s the kind of head of government we need.

Keeping with science, Biden knows climate change is not a hoax. While he wasn’t the first choice of environmental activists or ourselves, his plan to cut net carbon emissions down to zero puts us on the right track instead of running backward. While Biden must become more aggressive, the planet cannot wait another four years of Trump’s do-nothing policy on the climate crisis.

Our next president must also unequivocally denounce white supremacy and racism, as the current White House occupant has not. After global attention was put on yet more murders of Black Americans — George Floyd, Breonna Taylor, Ahmed Arbery — this summer unleashed a national reckoning on systemic racism in America. We must have a president with the courage to reexamine systems that disproportionately imprison and oppress Black Americans.

Biden wants to work toward a more equitable justice system. As a former senator, he has a questionable past with such legislation — and again, we preferred different candidates — but Trump’s record cannot be allowed a second term.

While Biden recognizes systemic injustice, all the president can think to do is voice support for violent police and accept white supremacists as “very fine people.”

And even on substantive policy, Trump has not delivered on his famous promises.

No wall is built. The Affordable Care Act wasn’t repealed, let alone replaced with something “terrific.” American leadership and respective abroad is the lowest it has been in generations.

For our imperfect democracy to have a chance at survival, we have to end this dangerous, toxic presidency.

We are simply worse off than we were four years ago.

It’s not enough to remove an indefensibly out-of-control president.

If the Biden Administration is to be successful in restoring the soul of America, the man from Delaware is going to need some help.

That’s why we also endorse Theresa Greenfield for U.S. Senate.

Ernst has voted against the best interest of Iowans time after time. She has failed on the issues that matter most to us as young people, doing nothing of note on rapid climate change — which especially threatens agriculture, an industry the senator claims to champion. She has been passive in her response to the ongoing pandemic and its subsequent recession.

She has simply not lived up to even modest expectations.

One of Ernst’s most egregious acts in Congress is her approach to the recent Supreme Court nomination of Judge Amy Coney Barrett. Ernst has only pushed for the election-year appointment while joining her fellow Iowan, Sen. Chuck Grassley, on the Senate Judiciary Committee. Just four years ago — when a similar situation arose with a Democrat in the White House — the Republicans did not even consider a Supreme Court nominee.

It appears that Ernst only cares more about grabbing power for her political faction than improving our country.

During her six years in Washington, she has done little to distinguish herself from her party, first sabotaging the end of the Obama presidency and now enabling President Trump. We cannot grant her another term as one of the few voices on the federal level from the Hawkeye State.

Let’s be clear — we are not particularly thrilled with the Democratic nominee in this race. Greenfield’s platform only scratches the surface of what’s necessary to combat COVID-19, climate change, and racial injustice.

And it’s not as if the farmer-turned-businesswoman is an outright bad candidate. Unlike the incumbent, Greenfield understands the climate crisis’ threat to Iowa’s crop yields, and recognizes the basic science that is critical to mitigating the pandemic.

Greenfield supports the John Lewis Voting Rights Advancement Act and Black Maternal Health Momnibus Act — two pieces of legislation that, if passed, will serve as cornerstones in a new era of justice in Iowa and America. As for Ernst, she said systemic racism doesn’t exist just last week.

These policies are just the first steps, but Greenfield’s commitment to them make her potential senatorship much more promising than another six years of Ernst.

To the extent Iowa has a say in Congress, let’s make sure our voices are the ones being heard, not the Republican blockade.

With the presidential and Senate races taking up so much attention, it’s easy to overlook elections further down the ballot. But every race is important, and this one is no different.

In keeping with our view that strong Democratic majorities is the best way forward for the federal government, we support Rita Hart for Iowa’s 2nd congressional district.

Similar to how Greenfield can support the Biden agenda to rebuild the country in the Senate, Hart can do likewise in the U.S. House.

The lifelong Iowan has a long history serving the Hawkeye State, first as a public school teacher for 20 years, and later as a state legislator in the Iowa Senate.

For this race, we extended interview invitations to both Hart and her Republican opponent Mariannette Miller-Meeks. Hart accepted our offer, while the Miller-Meeks campaign declined to sit down with us at all.

During our time with Hart, we asked her to clarify her stance on a multitude of issues and discussed her approach to how she would carry herself on Capitol Hill.

We went through the concurrent crises discussed in our other endorsements — the pandemic, climate crisis, systemic racism — and Hart had decent albeit dry answers for them all.

On many issues, Hart did not give specific policy ideas or positions, and instead eschewed labels and spoke of bipartisan problem solving.

These are the types of vague platitudes that could be sharpened by a viable second party. Unfortunately for voters in Southeast Iowa, the alternative candidate trades generalized liberalism for the regressive stances that disqualify the Republican Party.

We would have liked to ask Miller-Meeks about her policies and beliefs, but without her talking with us, we can only take her words at face value — and those values conflict with ours.

Miller-Meeks supports Trump’s proposed racism-fueled wall on the Mexican border. She has claimed Democrats are for so-called open borders despite the party rejecting the idea.

Miller-Meeks’ anti-choice position would hurt women in Iowa and elsewhere. Hart boasts the endorsement of NARAL, one of the largest pro-choice advocacy groups in America.

One specific policy Hart honed in on during our interview was on supporting Iowa agriculture — exactly what we need in a post-derecho and climate-wary environment.

Hart supports the usage of cover crops to maintain soil quality and sustainability. She understands farmers can’t be expected to take on the task alone, and they need a government that efforts to protect not only our planet, but our economy in the post-pandemic future.

All three of these Democrats are far from our ideal candidate.

We wish that we had more choices that we could support in good faith. On both personal and journalistic levels, we initially felt uneasy about being so outright in favor of one party, especially one that fails to truly meet our moment.

But with our current emergencies, we can’t kid ourselves. We are out of time and out of options.

Vote Democratic, and after that, continue the fight for a better world.