The players claim they were subjected to intentional race discrimination by the coaching staff and administration in their time as Hawkeyes. 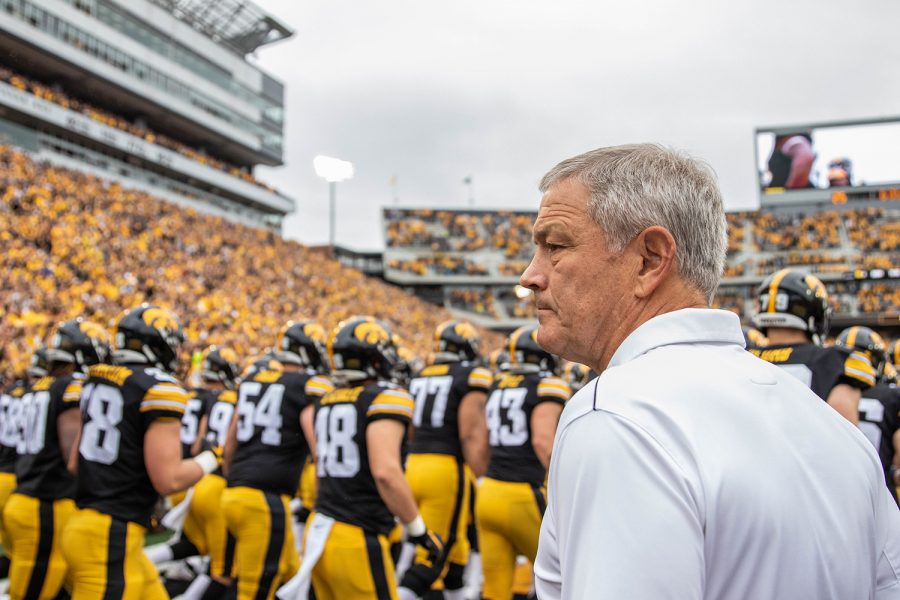 Eight Black former University of Iowa football players are demanding monetary compensation and the removal of head coach Kirk Ferentz, offensive coordinator Brian Ferentz, and Athletics Director Gary Barta, claiming they were subjected to intentional race discrimination by the coaching staff and administration in their time as Hawkeyes.

“Through the program’s pervasive harassment, bullying, policies causing disparate impact, and race-based threats and retaliation, our clients were deprived of a meaningful opportunity to pursue a high-quality education while competing at the highest level of collegiate athletics,” the letter reads.

The eight former players are also seeking a payment of $10 million for their “loss of professional opportunities” and the “pain and suffering” they said they experienced at Iowa, as well as a $10 million fund to compensate other athletes for the “discrimination and ongoing severe and pervasive acts that constitute intentional discrimination.”

The remaining demands in the letter are:

Mandatory “anti-racist” training for all athletic department coaches, staff, and personnel on an annual basis.
The implementation of a senior Black male administrator position to support Black athletes at Iowa.
The establishment of a board of advisors consisting of Black football players and “anti-racist” professionals to monitor the program and the coaching staff.
Tuition waivers for any Black athletes who attended Iowa during Kirk Ferentz’s 22-year tenure and did not graduate with a degree.
The payment of athletes’ attorney’s fees.

In the UI’s written response sent to Solomon-Simmons on Sunday, Carroll J. Reasoner, the university’s vice president for legal affairs and general counsel, declined the group’s monetary and personnel demands.

“We would welcome the opportunity to visit with your clients to determine their interest in participating in activities that assist in creating meaningful change within the Iowa football program, the Iowa Athletics Department and campus community,” Reasoner’s letter says.

Part of the UI’s response says that the university has already implemented many of the demands in the group’s letter.

Broderick Binns, a former Hawkeye football player, was named the Executive Director of Diversity, Equity and Inclusion for the Athletics Department in July and “directly supports our BIPOC student-athletes.”

Kirk Ferentz has expanded the team’s leadership group to “add more diversity in race and class rank,” and has formed an advisory group made up of former players. The athletics department already has a program for former athletes that have exhausted their eligibility to return and complete their primary undergraduate degree.

“We appreciate some former athletes sharing insights on their experience while at the University of Iowa,” Harreld said in a statement. “Many of their concerns have been reviewed and addressed. And to be clear, any student-athlete that has left the university and did not obtain their degree is welcome to return and we are here to support them.

“There are several demands outlined in the letter and we are proud of the efforts made to date. We have a path forward that includes ideas and recommendations from many current and former students aimed at making the University of Iowa a more inclusive and better place to learn, grow and compete as an athlete. However, the university rejects the demands for money and personnel changes.”

The group gave the UI until Oct. 19 to respond before filing suit in a court of proper jurisdiction, in addition to filing a discrimination complaint to the U.S. Department of Education Office for Civil Rights.

This is the latest development after former Hawkeye football players raised concerns with the program’s culture in June.

Former Iowa offensive lineman and current NFL player James Daniels tweeted on June 5 that “There are too many racial disparities in the Iowa football program. Black players have been treated unfairly for far too long.” Following Daniels’ initial tweet, dozens of other former Iowa players alleged they experienced racist and demeaning behavior in their time with the football program.

Chris Doyle, Iowa’s former head strength and conditioning coach, reached a separation agreement with the UI on June 15 after several former players alleged that Doyle made racist remarks to them.

The agreement between Doyle and the university was not made in lieu of termination. Doyle will make $1.1 million from the agreement, and will receive health and dental premiums from the university at his current coverage levels for 15 months.

The eight players claim they were subject to discriminatory treatment by Brian Ferentz and Doyle, whom they say used racial slurs and made derogatory comments toward them. Kirk Ferentz, the players say, allowed this conduct to occur.

“[Kirk] Ferentz and [Brian] Ferentz have never had to answer for their extensive roles in creating, developing, and taking part in the pervasive culture of discrimination that humiliated and beat down the numerous African-American athletes under their control,” Solomon-Simmons’ letter reads, “profoundly impacting not just their experiences as team members, but their overall physical and psychological well-being, and their educations as well.”

A review of the Iowa football program by the law firm Husch Blackwell found that the program’s rules “perpetuated racial or cultural biases and diminished the value of cultural diversity” and allowed a “small group of coaches” to demean players.

The report by the firm did not recommend that Kirk Ferentz or Barta be removed over the findings of its investigation. The report did say that several players said that the program’s culture was “not just a Chris Doyle problem.”

“Those players said the culture problems are systemic and cannot be fixed simply by getting rid of one coach,” the report states. “Several former players commented that Coach Doyle should not be a ‘scapegoat’ for the systemic issues in the program.”

Brian Ferentz was also accused by former players on social media of making racist and demeaning statements to them.

In his first public comments since the allegations, Brian Ferentz, who remains on staff, apologized to the former players but said he had “no recollection” of making any racist statements. Tyrone Tracy and Mekhi Sargent are among the current Iowa football players who have defended Brian Ferentz, saying they have never been mistreated by him.