The topic of racial injustice and methods to fix it are perceived as controversial and maverick, but that is only because more politicians do not do their part to speak out against it. 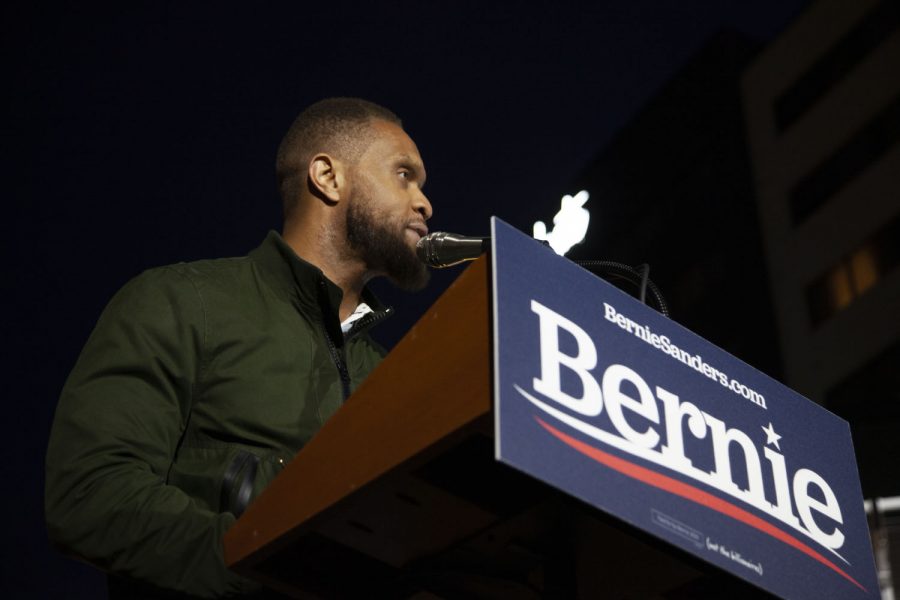 Linn County Supervisor Stacey Walker speaks to a crowd of Bernie Sanders supporters in the Ped Mall on Friday, October 25th, 2019. Sanders spoke on his platform issues such as the legalization of marijuana, the climate crisis, immigration reform, and raising the minimum wage.

We are taught to accept a negative peace while many fail to receive justice.

Although our country has made some progress, it has failed to address its deeply rooted issues that subjugate minorities. Part of that blame rests with our politicians.

The truth is hard to express from elected office, especially in a society that makes it where success can only occur if you follow the status quo and accommodate to what the majority are more accustomed to hearing.

Stacey Walker is working against that.

The Linn County Supervisor described how the shooting of Jerime Mitchell changed who he was as a political figure — neutral, youthful, and non-controversial, which is what it took to “succeed in politics.”

“The hard problem to address is the one resulting from politicians ignoring the issues altogether because they view them as too risky or controversial,” Walker said.

Politicians have the power to stand down or debate what to do about this reality. However, the lived experience of millions of minorities who face discrimination and oppression on a day to day basis is often overshadowed because it doesn’t “concern” the majority.

It wasn’t until this year that the U.S appears to be waking up to the truth. In 2016, only one third of Americans considered racial and ethnic discrimination to be a big problem in the United States, however, this number jumped up to 76 percent as of now.

A growing majority of the country is ready to fight and dismantle the history of structural racism. The other half, especially those in power, are looking the other way in order to preserve their reputation.

Said Walker: “The great irony of it all is that these issues of race and systemic oppression are only considered controversial because not enough mainstream politicians choose to talk about them.”

Working on the local level, Walker has strived to bring much needed change to the community and brought up issues on race relations that would’ve been buried under the silence of politics for years.

While some lawmakers protect discrimination by silencing those out of power, Walker serves a model for it’s like to truly represent his community.

“People are not comfortable enough to talk about issues that don’t affect them,” he said. “They simply don’t look at them as their problems.”

The status quo is ignorance and oppression. Robin DiAngelo, the author of White Fragility, said that “it is comfortable for me, as a white person, to live in a racist society.”

That comfort can be blinding. While some of us are sitting at peace, there are people fighting for their lives.

In order to move forward, politicians need to let go of the facade they put up in order to protect their social status, and address the deeply rooted biases and issues in America. This will require momentum to grow in city halls and local governments in order to root out local injustices.

In Iowa, a predominantly white state, you can only imagine the lack of diversity in leadership positions.

There are no people of color in Iowa Senate and only five representatives in the Iowa House are Black.

This what a lack of diversity does. It leads to ignorance and the abandonment of issues which can be considered as too “controversial,” in turn leading to more injustice.

But by continuously speaking up and standing alongside grassroot activists, there are those who can bring these problems to light, and it’s up to us to support them. Through raising awareness and amplifying the voices of minority communities, people are starting to understand.