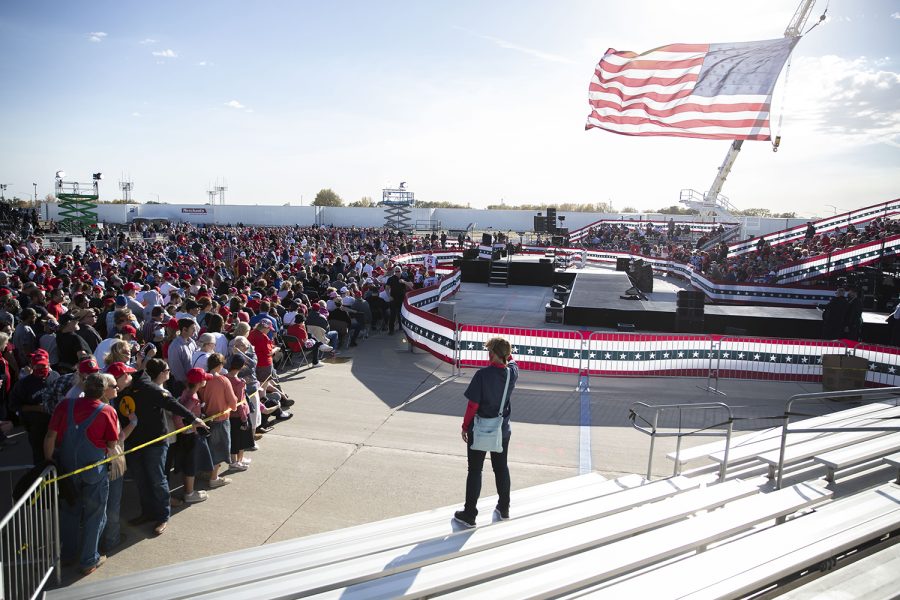 The crowd is seen during a Trump campaign rally on Wednesday, Oct. 14, 2020 at the Des Moines International Airport. Thousands of people showed up to hear President Donald Trump speak about his campaign and support Iowa republicans for the upcoming election.

Several thousand Iowans filled a tarmac at the Des Moines International airport Wednesday night to greet President Trump, and many said they plan to vote for Trump on Nov. 3, despite his rhetoric many consider to be racist.

Many people The Daily Iowan spoke to said that while they don’t particularly like the language Trump uses, they said they appreciate his American values and patriotism and that he’s not always politically correct.

Trump’s language often borders racism, like when he generalizes Mexican migrants coming over the border as criminals and rapists, and like when he said Black Lives Matter “is bad for Black people. It’s bad for everybody.”

Trump sometimes uses more coded language, like when he says he’s going to stop Democrats from destroying the suburbs by building low-income housing projects and saying he’s going to make sure schools and workplaces don’t facilitate anti-American education — both points that received a loud applause on Wednesday.

“He doesn’t play politics,” said Sherri King, 67, a retired nurse. “The Democrats have done nothing but obstruct him. They spied on his campaign and then tried to impeach him for two and a half years.”

King, who voted for Trump in 2016, said he embodies an “American way of life” in a way that Joe Biden does not. She said she supports the wall on the U.S.-Mexico border Trump encouraged construction on in order to prevent illegal immigration. The border wall, which Trump claimed on Wednesday to now be 400 miles long, was a centerpiece of his 2016 campaign.

King said that when she was laid off from her job as a nurse in 2016, she did not qualify for health care under the Affordable Care Act because it was based off of her income from the previous year. She said Trump helped to repeal the ACA individual mandate, something she said was a big accomplishment.

The Supreme Court will hold oral arguments on the future of the ACA on Nov. 10, one week after Election Day. Amid a rushed confirmation process to fill former justice Ruth Bader Ginsburg’s seat, Democrats have stressed the importance of ensuring Americans can continue on with their government-provided health insurance.

Trump has voiced support for repealing the ACA, but does not currently have a health-care plan to replace it with.

James Steinberger, 57, voted for Trump in 2016 and is voting for him again because of his “American standard of living.” Steinberger pointed to Trump’s views on law and order, saying he strongly opposes some Democrats’ calls to defund the police.

Steinberger, a Waukee native, said he supports the idea of Black Lives Matter, but said he doesn’t like “identity politics,” saying that because he’s a white, male, conservative, he feels as though the media is generalizing that demographic of people as racist.

Some members of the Democratic Party have made calls to defund the police, but Biden has not endorsed this position. Despite Trump’s attacks on Biden, Biden has said he wants to give police departments the resources they need to implement meaningful reforms.

Steinberger acknowledged that some of Trump’s language around the Black Lives Matter movement and immigration policy can be perceived as racist, and he said he wishes Trump would soften his language. But, he said, it comes down to what actions a president takes while in office.

Admira Ibradzic, 19, said she’ll be casting her first vote in a presidential election for Trump on Nov. 3. She said that she doesn’t like the way Trump talks about immigrants or women, but that no politician is perfect.

“I really don’t like the way Trump talks currently, if there’s one thing I could change about him is the way he says things,” she said. “But there’s a difference between action and words.”

She said her parents are immigrants from Bosnia and that her father owns a small business in Waterloo, and that she believes people who work for their money should be able to keep it rather than paying high taxes.

Ibradzic said she was a hardcore liberal when she was in high school, and then as she got older, she said she realized her views on taxes, gun control, and abortion align more with the Republican Party.

“Just go vote … it is your right,” she said. “As a young person, it’s the first time for me voting and I’m excited to do it, and I feel like everyone should share that same excitement. You know, it’s a big thing.”