The Daily Iowan fact-checked several claims made by both candidates for U.S. Senate in Iowa, highlighting claims on health care and agriculture policy. 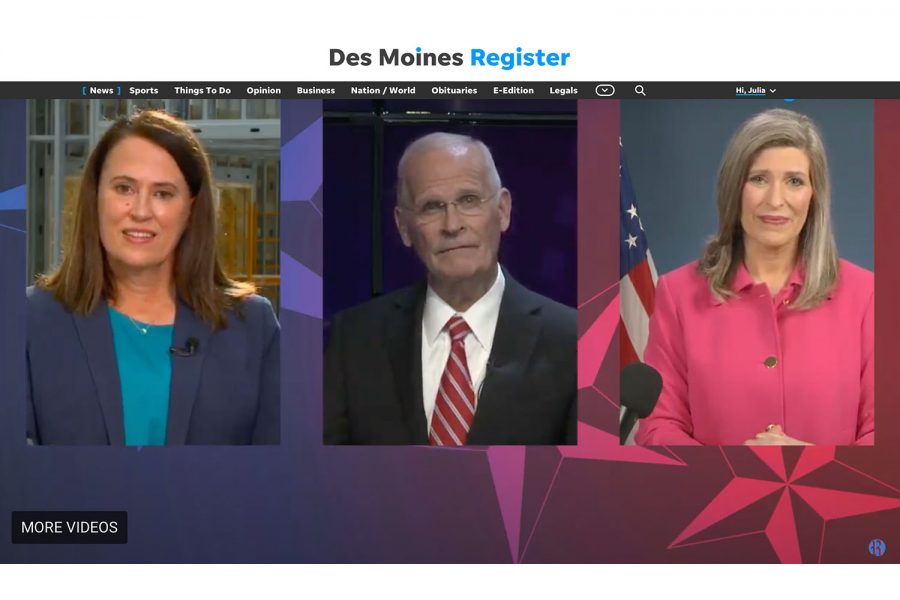 Iowa’s third and final U.S. Senate debate Thursday night was marred by technical difficulties for the first 20 minutes, as both Republican Sen. Joni Ernst and Democratic candidate Theresa Greenfield struggled to hear moderators and dealt with their microphones frequently cutting out.

Once the problems were resolved, the candidates sparred on health care, racial justice, and agriculture. The Daily Iowan fact checked several claims made by both candidates.

Ernst: “Since the inception of Obamacare, when it went into effect, 2014 until today, for those that are purchasing insurance policies, the premiums have doubled.”

Premiums for health insurance, for both single and family coverage, have increased since open enrollment in Affordable Care Act exchanges began. The degree to which these increases have been because of the ACA is the subject of some debate, but premiums haven’t doubled across the board since 2014.

Ernst was talking specifically about people who purchase their own health insurance. Premiums have increased more for people who don’t get their insurance through their employer, but ACA subsidies help offset some of that cost.

An analysis from the Kaiser Family Foundation looked at premiums for the second-lowest cost plan on the ACA marketplace in each U.S. county for a 40-year-old purchaser, and found premiums had increased from $273 to $462, an increase of about 69 percent. This analysis doesn’t include people who purchase health insurance off the ACA marketplace.

Ernst may have been referencing a 2017 report from the U.S. Department of Health and Human Services, which found that individual consumers in the 39 states that use Healthcare.gov had their premiums increased by 105 percent: from an average of $232 to $476.

But that report only covers a segment of people purchasing health insurance. The report says it’s limited to individual consumers in those 39 states, and to people who purchase through the ACA exchanges, which would have excluded about 38 percent of people in 2016, according to the report. The report itself says the limitations could cause the estimates to be higher than a more comprehensive estimate.

The Ernst campaign did not return a request for comment to clarify the senator’s claim.

Ernst: “The public option that Ms. Greenfield keeps referencing would drive 52 of our… rural health-care systems out of business.”

It’s impossible to judge the truth of a hypothetical, but there is some data to support Ernst’s claim. A study — commissioned by health industry corporations — from a Chicago-based global consulting firm Navigant Consulting found that a public option could threaten up to 1,037 rural hospitals nationwide.

The study said a public option could cause Iowa’s rural hospitals to lose between $77.7 million and $276.9 million, depending on the scenario. These numbers are also based on the assumption that hospitals under a public option would be reimbursed at Medicare rates.

The study modeled three levels of participation in the public option, and in the most extreme scenario found that a large shift to a public option, without an increase in reimbursement rates, could threaten up to 52 rural hospitals in Iowa.

Greenfield’s campaign website doesn’t say whether she supports reimbursing rural hospitals at a higher rate than Medicare reimbursements, but it does say she’s “committed to strengthening and protecting rural hospitals,” though it doesn’t offer specifics.

Ernst has voted for three legislative packages that would have repealed the Affordable Care Act in different ways. The packages were all voted down in the Senate.

The third amendment Ernst voted for was the Health Care Freedom Act, or a “skinny” repeal amendment. This would have repealed the individual mandates and that large employers provide health insurance. The individual mandate required most Americans to have health insurance or face a tax penalty, and enforcement of that provision was eventually repealed effective 2019.

Greenfield: “So many farmers are under financial stress in Iowa, due to haphazard trade, due to abusive, reckless tariffs … Net farm income is down 75 percent since 2013. Bankruptcy rates are at an eight-year high.”

According to a January 2019 report from Iowa State University Extension and Outreach, “net farm incomes dropped sharply last year, and is down 75 percent from 2013. One-third of Iowa’s counties have negative net farm income.” This report looks at economic and social trends in Iowa from 2007 to 2017.

A majority of Iowa’s farms are residence farms, described in the report as non-farm occupation or farms with sales less than $150,000. These make up 55 percent of the farms in Iowa, and they saw 4.7 percent increase in net farm income from 2013 to 2017.

Net farm income has increased 50 percent nationally since President Trump has taken office, but federal aid packages account for a lot of the increase.

From 2017 to 2018, Congress approved $28 billion in federal bailout money for farmers that were impacted by the trade dispute between the U.S. and China.

According to a report from PolitiFact Iowa, if you look at the net farm income from 2016 to 2019 without the federal aid, farm net income still increased 42 percent. Farm net income includes net cash income that covers crop yields and any additional revenue.

“While before the pandemic, net farm income was down 75% and bankruptcy rates were at an 8 year high, Senator Ernst failed to stand up against haphazard trade and reckless tariffs that hurt Iowa’s agriculture industry,” the Greenfield campaign wrote in a press release during the debate.

Farm bankruptcy is at an eight year high. According to the American Farm Bureau, farm bankruptcies nationally increased 20 percent from 2018 to 2019, the highest since 2011.