While public health experts advise against large gatherings, those attending President Trump’s rally in Des Moines said attending the rally was a matter of personal freedom. 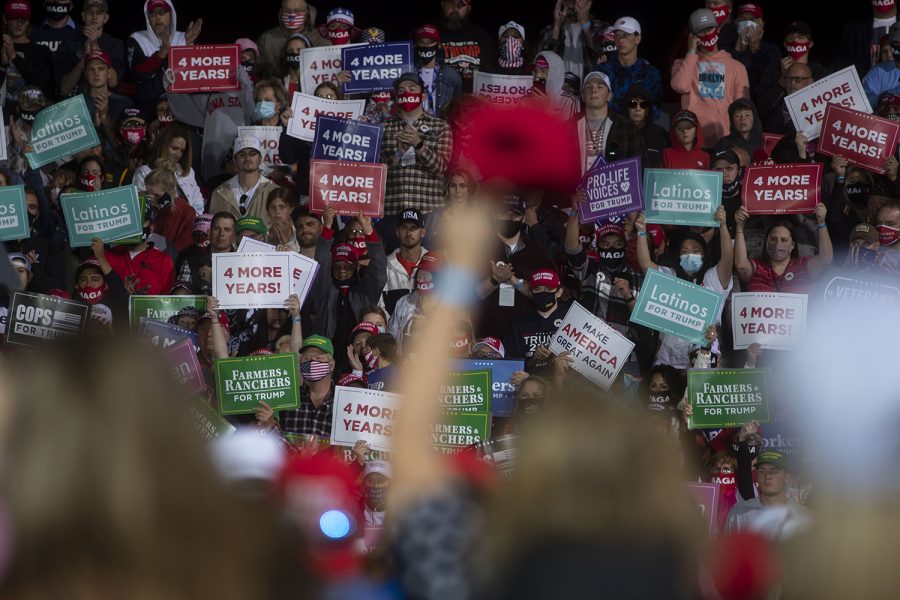 Attendees hold signs on the bleachers during a Trump campaign rally on Wednesday, Oct. 14, 2020 at the Des Moines International Airport. Thousands of people showed up to hear President Donald Trump speak about his campaign and support Iowa republicans for the upcoming election.

The risk of coronavirus spread was not a chief concern of Trump supporters at the president’s rally in Des Moines Wednesday, which has drawn criticism from political opponents and public-health experts for lax safety precautions during the coronavirus pandemic.

“We know the risks, and we exercise our right to come out and celebrate America and celebrate freedom and celebrate four more years of Trump,” said Blake Froome, 31, a Kansas resident who came to the rally from Omaha, where he was canvassing for Trump’s campaign.

Trump’s in-person rallies have drawn sharp criticism from Democrats and public-health experts alike, and the rally in Des Moines contradicts recommendations from his administration’s coronavirus task force on holding public gatherings in Iowa.

Still, supporters were eager to attend the rally, where mask-wearing was inconsistent and thousands of people packed together on the tarmac outside the Des Moines International Airport to hear the president speak.

Echoing Iowa’s Gov. Kim Reynolds, personal responsibility was a central argument rally goers gave in defense of Trump’s decision to hold the large rally. Noting the sparseness of masks, people said it was a question of freedom and personal choice to wear a mask.

“I think that people who are higher risk should certainly make that decision for themselves and stay home if they need to stay home, and allow those of us who want to come out and support our candidates do that,” said Mary Galligan, 50, of Omaha.

Some attendees said they weren’t concerned about the risk of contracting the virus, saying they felt like a risk of the virus was present wherever they went. Al Johnston, a 60-year-old from Cedar Rapids, said the size and energy of Trump’s rallies is one of the main draws of the events. The rally in Des Moines was Johnston’s second time seeing the president in person.

“This virus, no matter where you go, it’s like playing Russian roulette,” he said. “Whether you go to a rally or you go to the grocery store, wherever you go. So I don’t worry about it too much. If I’m gonna get it I’m gonna get it.”

The most recent report from the White House Coronavirus Task Force, from Oct. 11, said Iowa’s rate for new cases is seventh in the country, and it put Polk County in the “yellow zone.” Previous reports have recommended gatherings in the yellow zone stay below 25 people.

With thousands of people in attendance, the rally does pose a higher risk of transmission and spread than other activities. The chances of contracting and spreading the virus are heightened when large numbers of people gather for a long time, Polk County Public Health Communications Officer Nora Aigner Davis said in a statement provided to The Daily Iowan.

“Polk County is finally starting to see a stable and slow reduction in daily cases and large events and gatherings where people are not following CDC [guidelines] could cause cases to increase again,” Davis said.

The Iowa Democratic Party slammed the Trump campaign for hosting the event, saying it contradicts the White House Task Force’s own guidance for the Hawkeye State.

“President Trump’s event today is yet another example of his willingness to threaten the safety of Iowans for his own ego,” Iowa Democratic Party Chair Mark Smith said in a statement Wednesday. “But this political stunt will not fool anyone: while Trump is shamelessly self-promoting, more than 101,000 Iowans who have gotten sick are still suffering and nearly 1,500 families with dead loved ones are still grieving,”

The Iowa Republican Party did not respond to a request for comment on the safety of the rally. Signs were posted around the venue encouraging attendees to wear masks, and temperatures were taken upon entering, but mask wearing wasn’t enforced and less than half of the people in attendance were wearing masks.

People interviewed were dubious about the likelihood of the rally to be a “super-spreader” event, as Iowa Democrats and Des Moines Mayor Frank Cownie have suggested. Micah O’Neal, 20, of Cedar Rapids, said he was initially concerned about the safety precautions at the rally, but the precautions made him feel more comfortable.

“I saw a sign back there that said please wear your mask. They make sure that people wear their mask,” he said. “Obviously not everybody’s gonna do it, it’s all about personal choice, but as long as people have gotten tested and everything, I personally think it’s fine.”